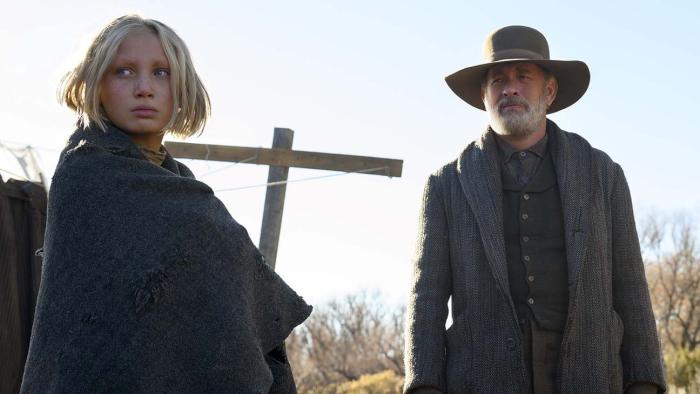 Now on Digital: In 'News of the World,' Tom Hanks Is at His Tom Hanksiest

In his latest, News of the World, Tom Hanks plays a character unlike any other he’s played, and yet what makes the character so effective is the image that Tom Hanks has cultivated over the years as a generous, thoughtful, and decent human being. Paul Greengrass — best known for his Bourne films — puts down the shaky camera and directs a languid, slow-burn throwback to Westerns of the John Ford variety, except that the fundamental decency of Hanks allows him to tell a story that wouldn’t have been possible with John Wayne, who built a career out of vilifying Native Americans.

News of the World is another variation on Ford’s The Searchers. Set in Wichita Falls, Texas in 1870, Hanks plays Captain Kyle Kidd, a reluctant veteran of the Civil War who travels from town to town reading stories from newspapers around the country. He’s basically an 1870s blogger. On his travels, however, he finds a 10-year-old girl, Johanna (Helena Zengel), left alone after her guardian — a member of the Kiowa tribe — is hanged by racist Texans. Kidd learns that Johanna has been “orphaned twice over” — once when Kiowa natives massacred her parents, and again when White people massacre her Kiowa family — and he decides to take Johanna, who mostly speaks the language of the Kiowa, back to an aunt and uncle who live in a German immigrant community 400 miles away.

Why? Because Captain Kidd is a character played by Tom Hanks, who is a fundamentally decent person, so while many of the characters in the film question why Kidd would go to such efforts for a little girl who doesn’t speak English, it would never occur to the rest of us that he would not. He’s Tom Hanks. When a Kiowa tribesman is hanged, Captain Kidd buries him, because that’s what he does. When a room full of rowdy racists gets belligerent with Union soldiers, Tom Hanks does not take a machine gun and mow them all down. Tom Hanks persuades them to see the humanity in everyone because that’s what Tom Hanks does.

Besides hitting upon the importance of journalism and storytelling — one of Hanks’ two favorite subjects, the other being the Greatest Generation — the rest of News of the World plays out more like a Tom McCarthy film, like The Visitor or The Station Agent. It’s a movie about a lonely man, whose life is upended by a ten-year-old whose language he does not share. Over the course of a 400-mile horse ride, and run-ins with sexual predators as well as men who refuse to concede the Civil War, the two forge a strong bond. German actress Helena Zengel is outstanding, and pulls off a feat one would not expect from a then 11-year-old: She outshines Tom Hanks.

Still, it’s Hanks’ movie, and it’s not just an old-school Western but an old-school star-driven picture, as well. It is a well-made, engaging, slow-burn, character-driven movie, but it’s also a really good Tom Hanks hang. If someone else had taken the role, I’m sure I still would have appreciated the film for the visuals, and its great storytelling, but I enjoyed it because of Hanks, who manages to both re-resurrect the genre and update it for more progressive audiences. It’s a good movie, but it’s a great Tom Hanks’ vehicle.

← Transition Updates: D.C. Police Officer on the Rioters: 'Thank You, But F**k You' | ShantyTok Is a Lovely Respite for These Lonely Times →