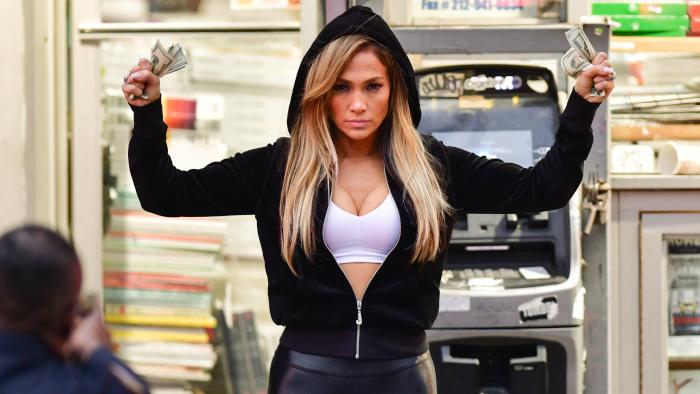 From JLo to 'Joker': The Biggest Snubs and Surprises from the 2020 Oscar Nominations

Another year, another set of Oscar nominees that leave us feeling majorly depressed. We should have expected that this would happen. We go through this cycle every year and that doesn’t make it any less depressing. What was especially disheartening about the 2020 cycle was how the year was jam-packed with amazing movies that broke the mold and blazed a trail for the future, dominated by women and people of color telling their own stories and reimagining familiar genres for a new age, only for the Academy to pretend that none of them existed. There was something particularly embarrassing about this year’s roster of nominees because there were opportunities a-plenty to take a fresh path that voters seem to have gone out of their way to avoid approaching. Out of the many nominees, here are the snubs and surprises that got the blood pumping the most this dreary Monday morning.

Retro Ramona 💚💜🧡 WOW!!! Such an honor to be included in @WMag’s #BestPerformance issue for my role as Ramona. #HustlersMovie 📸: @SaraMoonves

Let’s start with what was obviously the most egregious snub of the morning. Really, there is no damn excuse for the Academy ignoring Jennifer Lopez’s exemplary work in Hustlers. It’s bad enough that we all accepted that the film itself would be overlooked, even though it’s a stellar piece of work, but at least we had the supposed security of that JLo nomination in our corner. How could she lose? Her performance is brilliant, so fully realized and deftly layered with wit and emotion, and that doesn’t even get into the physicality of what the part of Ramona required. It’s too easy to dismiss Lopez as a personality and not an actor and I can dishearteningly imagine the Academy justifying this oversight by claiming she ‘hasn’t put in the work yet’ to be recognized. It’s nonsense. Pure and simple. Best Supporting Actress is also missing Zhao Shuzhen from The Farewell.

It’s been accepted that Laura Dern all but has this win in the bad. I certainly don’t begrudge her an Oscar victory and she is good in Marriage Story but that performance is very much Renata 2.0 and nowhere near her best work. In a year where Lopez and Shuzen among others did so well, and we still ended up with yet another all-white category, it’s tough not to be disappointed.

I must admit, I had just accepted with a heavy heart that this would be another year of all-male nominees. The Todd Phillips nod does sting, I must admit. What makes this absolute shut-out of women directors all the more egregious is that it was a phenomenal year for films made by female filmmakers. Think of Lorene Scafaria’s Hustlers, Marielle Heller’s A Beautiful Day in the Neighborhood, Celine Sciamma’s Portrait of a Lady on Fire, Mati Diop’s Atlantics, Greta Gerwig’s Little Women, Jennifer Kent’s The Nightingale, Lulu Wang’s The Farewell, Chinonye Chukwu’s Clemency, Kasi Lemmons’s Harriet, to name but a handful! What the hell does a woman director have to do to get the same level of recognition as the guy who made The Hangover? Speaking of Todd Phillips…

Joker Was the Most Nominated Movie?!

Joker began as an idea, an experiment really— could we take an “indie approach” to a studio film by inverting it into a character study to reflect the world around us? Explore what we’re seeing and feeling in society, from the lack of empathy to the effects of the absence of love. I am deeply honored by the overwhelming recognition of the Academy this morning, and I want to thank the genius that is Joaquin Phoenix, and all my incredible collaborators. We are beyond humbled that our peers in the filmmaking community have embraced the film and its message. #joker #oscars #1111

Eleven nominations. Yup. Joker landed more Oscar nominations this year than any other film. More than Tarantino. More than Mendes. More than freaking Scorsese! Look, I get why the Academy latched onto this one hard. It’s a billion-dollar hit that took home one of the most prestigious prizes in the fall Festival season, one with its film-making style and tone firmly in that of old-school 1970s Hollywood film-making, and it stars one of the best actors of his generation giving it his absolute all in the performance that is currently the Best Actor front-runner. If Best Picture is intended to reflect the films that made the biggest impact on the year in pop culture then Joker certainly has a lot in its corner to justify its presence among such intense competition. Still, I can’t help but be baffled that the film, which is proudly Scorsese fan-fiction, is doing better than the actual Scorsese movie, especially since The Irishman is a truly stellar piece of work.

While I’m on the subject of Best Picture, can we all just agree that it’s stupid to not fill out the category when you have ten spaces? Lose the weighted ballot process crap and just give us ten nominees. That way, we may have had Knives Out up there, as it deserved!

I let my guard slip with The Two Popes, convinced that Netflix had deprioritized the title in favor of bigger movies like The Irishman and Marriage Story. I’d previously written about how screenwriter Anthony McCarten has a skill in writing mediocre biopics that garner massive awards success for their leading actors. Naively, I thought the crowded fields for both Best Actor and Best Supporting Actor would shut out both Jonathan Pryce and Anthony Hopkins. Nope. They both got in. It’s not that their performances are bad or anything, but once again, look at the competition. In Best Actor, you could have included Taron Egerton for Rocketman, Eddie Murphy for Dolemite is My Name, Robert De Niro for The Irishman (how did De Niro of all people become so underrated this season?), and Daniel Craig for Knives Out. For me, I was seriously hoping there would be room in Best Supporting Actor for Willem Dafoe’s demented brilliance in The Lighthouse. Then again, all of these performances, even the most Oscar-baity ones, aren’t necessarily as safe as two old white guys talking about things.

Nothing For the Parasite Cast?!

Bong Joon-ho’s Parasite is one of the best movies of the year and the entire 2010s. We can’t say enough good things about it and even our most extravagant proclamations don’t do it justice. The Academy is not great when it comes to nominating actors in non-English language films, although there are exceptions now and then, such as the presence of Antonio Banderas this year in Best Actor. It’s baffling that Parasite, which has been one of awards season’s most acclaimed films, has been entirely overlooked in terms of its acting. The legendary Song Kang-ho puts in some of his finest work as the beleaguered but scheming patriarch of the Kim family, while Park So-dam steals the show as Kim Ki-jeong (‘Jessica. Only child. Illinois, Chicago.’)

No Lupita? Really?! I knew this was a long-shot but come on, how on earth do you overlook that stellar double performance in Us that is so wholly unique and unnerving and bloody difficult? The Academy isn’t great with performances in genre movies — another way it makes itself increasingly irrelevant — but Nyong’o is a previous winner with a lot of industry respect on her side so it wasn’t impossible. The same went for Awkwafina, who had previously won Best Actress in a Comedy/Musical at the Golden Globes for The Farewell. Ultimately, the chosen five felt very safe and depressingly indicative of how the Academy likes to view female roles and how they define ‘strong women.’ No offense to Charlize Theron but was anyone really all that hyped up about her performance as Megyn Kelly?

The Academy tends to get very lazy with Best Animated Feature, choosing to vote for the Disney or Pixar film in any given year because they’re a big name and you don’t say no to the House of Mouse. This year, however, Disney’s top animated player of 2019, Frozen II, was kept out in the cold and Netflix came out on top with two nominated movies, I Lost My Body and Klaus. It’s a great category, especially in terms of the variety of storytelling and animation styles, from CGI to 2-D to stop-motion! This may have been a bleak year for nominations but I’ve no complaints here.

Where is the Costume Love for Dolemite is My Name?

Ruth E. Carter is one of the true geniuses of movie costume design, and it’s still a shock that it took until last year for her to win an Oscar, one she truly deserved for her staggering work in Black Panther. She somehow managed to equal that with her designs for Netflix’s Dolemite is My Name, bringing subtle period details to the bombast of blaxploitation style. It’s a weird snub too because the Academy loves big lavish costumes and historical movies, and Dolemite is My Name is both! It’s also very black, of course, so yeah, sadly not all that shocked that the Academy ignored it. Another major costume snub is for Rocketman. What, you think all of Elton John’s stage outfits made themselves?

The Surprise is How Unsurprising It All Is

This is what realty stings about the Oscars this year. I have a theory, admittedly a hastily-thought out one, that the Oscars will always take the most vibrant and exciting seasons in cinema and distill it to its most uninspiring elements. That means old white men fetishizing nostalgia and ‘the good old days’ of the movies will always reign supreme, even when women and people of color telling their own stories are garnering greater critical acclaim and box office receipts. I’ve already seen a lot of self-aggrandizing over these nominations from the usual suspects who are eager to let everyone know how they don’t care about the Oscars because ultimately they don’t matter. That’s not entirely true. While they may not have much merit as historical markers of prestige and quality, the Academy Awards are still the best thing we have to gauge how Hollywood sees itself, how it wants to present itself to the world, and the future it wants to carve out for the industry and its audiences. That’s why it always feels like a slap in the face when women directors don’t get nominated. No matter how good they are or how Oscar-worthy their movies are, someone is always moving the goalposts so that their work doesn’t count. This is another reason I’ve become increasingly skeptical of the notion that there’s no such thing as a ‘snub’ with the Oscars. Great work seldom seems to count unless it comes from the ‘right people’ and said people are almost always the rich white dudes in baseball caps who the big studios throw lots of money at and ensure their popular friends spread the word come voting time. In a racist and sexist industry, everyone who isn’t a cishet white dude has to deal with those old boys clubs and decades of the reinforced ideal of what counts as a good or important film. Sadly, I don’t think the Academy really cares all that much about changing. They’re as beholden to nostalgia as the rest of the industry.

← Jared Leto Debuts His 'Morbius' Look In A Brand New, Story-Packed Trailer | Watch: Guy Hosts a Christmas Dinner For Fifty People Who Alone Over the Holidays →