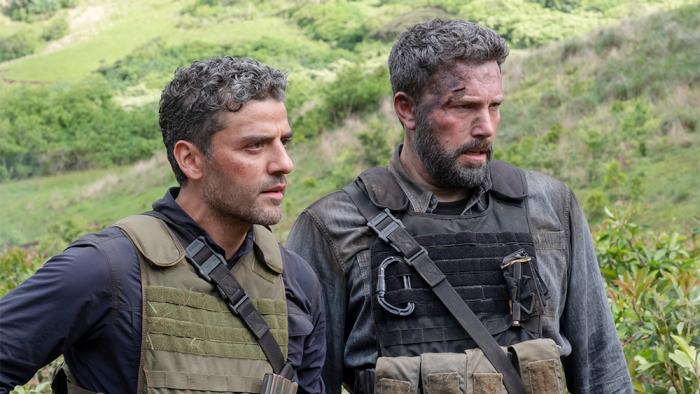 Netflix, which is notoriously stingy with its viewing numbers, recently released a list of its all-time most popular original films, based on their own, unvetted, internal figures determined by the number of viewers who watch at least two minutes of the film in question. There’s a lot you can glean in two minutes! Here are those ten films, some of which fit nicely into two categories: Happy Madison movies, and overly militaristic films. Abba Dabba Slabba Hoo Rah!

The Perfect Date (55 million viewers) — Laura Marano and Noah Centineo don’t have the same sparks that he shared with To All The Boys I’ve Loved Before’s leading lady, Lana Condor. So the central romance feels underwhelming and frankly like it was getting in the way of the fun that could be had with the central concept. Basically, The Perfect Date was better when it was called Loverboy. — Kristy Pucko

The Platform (56 million viewers) — The Platform, from director Galder Gaztelu-Urrutia, is something akin to a cross between the Canadian cult film The Cube and a vertical version of Bong Joon-ho’s Snowpiercer, an indictment of capitalism with all the subtlety of a sledgehammer to the kneecap. The blunt allegory, however, is part of The Platform’s appeal. — Dustin Rowles

The Wrong Missy (59 million viewers) — You knew what this movie was going to be like when you saw it was a David Spade/Happy Madison joint. At least this one isn’t as mind-thuddingly homophobic or transphobic as too many of these ‘comedies’ often are. This is merely garden variety misogyny masquerading as some bastardized form of empowerment. Someone give Lauren Lapkus the funds and support to make her own movie. — Kayleigh Donaldson)

Triple Frontier (63 million viewers) — This very good analysis of American imperialism and its devastatingly insidious effects on the individuals it ensnares into its web is only, like, half of Triple Frontier. The other half of Triple Frontier walks this idea back, tries to argue that the bonds of brotherhood between the men are also worthwhile and respectable, and that is where the film falters. In its inability to make up its mind about what it’s trying to say, Triple Frontier demonstrates the worst tendencies of Boal’s work, which can be brutal just for brutality’s sake. — Roxana Hadadi

The Irishman (64 million viewers) — At once fresh and pleasantly familiar, innovative and nostalgic, watching The Irishman feels like meeting an old friend for the first time — the sort of delightful impossibility that can only be crafted by a true magician. After all this time, Scorsese’s still got it, and it’s a joy to behold. — Ciara Wardlow

Murder Mystery (83 million viewers) — There is an amusing movie trapped inside Murder Mystery, struggling to get out, but it’s barely alive. This thing just limps along, carried by the capable direction of Kyle Newacheck (of Workaholics and the Netflix movie starring those guys, Game Over, Man!) but weighted down by a tedious script from James Vanderbilt, packed with product placement and dick jokes and all the stuff you would come to expect from an Adam Sandler movie on Netflix. — RH

Spenser Confidential (85 million viewers) — We never reviewed Spenser Confidential because TK said he would come back to do it because he loves the book series, but he’s busy and has a life and never got around to it a and no one else did either, so there is no review, but that’s OK because no one ever actually reads these blurbs anyway. — DR

Bird Box (89 million viewers) — Bird Box, led by a strong, against-type performance by Sandra Bullock, does a solid job of telling a story that compares the desire to destroy oneself with the constantly challenging, selfhood-sapping nature of being a parent. The music by Trent Reznor and Atticus Ross is suspenseful, the cinematography by Salvatore Totino really frames what Malorie and the children are facing during this river journey, and the spookiness of invisible beings urging you to harm yourself and others is, while familiar, nevertheless effective. — RH

Extraction (99 million viewers) — Extraction is nothing new. Nothing! Much has been made of its 12-minute-long single-take action sequence, and of course we all root for Hemsworth, who is tied in our collective consciousness for second-best Chris. But Extraction, the directorial debut from experienced stuntman and stunt coordinator Sam Hargrave and written by Joe Russo, one half of the Russo Brothers (adapting a graphic novel the brothers co-wrote, Ciudad), feels remarkably dated in narrative and distinctly derivative of John Wick in action. Head shot, body shot, Hemsworth sad, brown people bad, head shot, body shot. That’s the rhythm of Extraction, and yes, it’s also a white-savior narrative, because we don’t have enough of those already! — RH