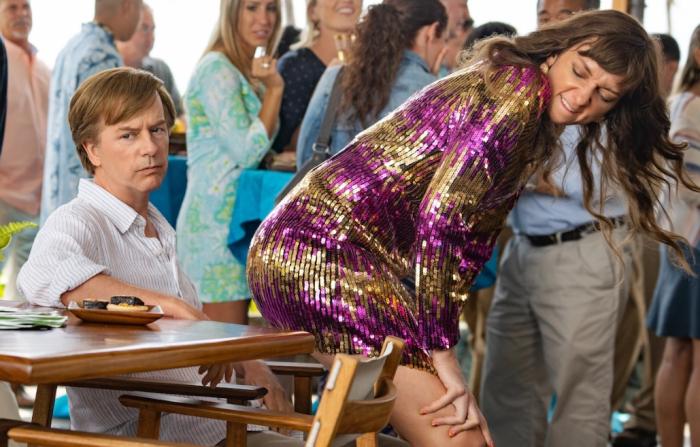 There’s something about seeing the logo for Happy Madison Productions before a movie that sends shudders down my spine. Adam Sandler has made a whole lot of money and won over a baffling number of fans with his array of comedies mostly made by his friends and often done so for an excuse to take a fully-funded vacation somewhere nice and full of product placement. At least Sandler is loyal to his pals because I’ve no idea why anyone else would be so committed to giving Nick Swardson a career.

The Wrong Missy isn’t for Swardson or Schneider or Sandler himself (although Adam’s wife, Jackie, is here and she’s pretty solid). This one is for David Spade. Hey, he’s got to fund those Joe Dirt sequels somehow. Never fear, though, because Happy Madison have assembled a veritable murderer’s row of talent. Director duties fall to Tyler Spindel, who collaborated with Spade on another Netflix title, Father of the Year. That film’s co-writer, Brandon Cournoyer, is here too, a former production assistant on a whole heap of Sandler-isms. And yes, Swardson and Schneider are here. I’m not sure they were even cast in the movie. I think they just turn up whenever Sandler texts them a certain address.

The Wrong Missy has an agonizingly familiar set-up that I’m surprised Happy Madison hasn’t milked dry already: Spade plays your typical wet-rag single dude who meets the woman of his dreams (Molly Sims) in an airport mix-up, but when he goes to invite her to a work retreat, he accidentally invites a nightmare blind date with the same name. Said woman is the wrong Missy of the title, played by Lauren Lapkus, and, of course, she’s crazy. She has no filter, she loves carrying around a giant knife, she makes every social situation into a total nightmare, and she’s also kind of a molester? Like, she straight up masturbates Spade on a plane while he’s unconscious on tranquilizers she forced into his mouth? You know, comedy. Shenanigans (question mark?) ensue, and of course, it all happens in an exotic location.

Is there anything tougher to sit through than a bad comedy? I’ll take the anxiety-inducing nightmare of a Gaspar Noe/Safdie Brothers/Pier Paolo Pasolini triple bill over another ninety minutes of The Wrong Missy, a film that didn’t make me laugh once. And I’m not a tough laugh either. I used to cackle every time my old weekly university pub quiz sessions announced the team name ‘The Gaza Strippers.’ This one, however, just made me want to curl up, hedgehog-style, until Netflix went onto auto-play for Tiger King or something semi-related.

The big joke here — indeed, the only joke the movie really has — is ‘this woman be crazy.’ To the credit of Lauren Lapkus, she is certainly giving her all to this embarrassment of a role. Lapkus is a comedic actress impeccably talented in endless ways, as evidenced by her oft-genius podcast work. She’s one of the best impro comedians in the game, a skill she shows off with aplomb in her old series With Special Guest Lauren Lapkus and in collaborations with figures like Paul F. Tompkins and Scott Aukerman (their episodes of Comedy Bang Bang should be the stuff of legend.) She’s well-suited to a role like Missy which requires a game commitment to being utterly repellant yet oddly sweet, but of course, The Wrong Missy lets her show off none of that. This is a one-note ‘crazy b*tch’ shtick, clearly written by dudes who are sharing all their worst nightmares about those girls who clearly won’t leave them alone. Chicks, amirite, fellas?! Always trying to grind their butts against us and sexually assault us in our sleep and ruin that big promotion for us with that nameless company. Really, she’s just acting like every dude in an Adam Sandler comedy, but it’s scary because it’s a lady. Women in Happy Madison movies should be pretty and young and delightfully beleaguered at their schlubby husband’s antics. At least the movie lets Lapkus wear some nice dresses? It’s small consolation for the fact that she has nobody to bounce off here since Spade and company seem to be sleep-walking through proceedings.

This set-up would at least be nervy if the film committed to the sheer nihilism of this concept, but, of course, it doesn’t. This is a Happy Madison joint and there’s nothing more these movies love than false sincerity. So, OF COURSE, two-thirds of the way through, Spade’s character suddenly starts to warm to Missy, mostly because she stops being a full-on psychopath. She even gets a sympathetic back-story! See, she’s a horrendously dangerous person for a tragic reason, so all the times she kept literally sexually assaulting David Spade is a-okay! That AND she invites him into a threesome with Sarah Chalke. I can’t believe this movie dangles the possibility of a zany rom-com featuring Chalke and Lapkus then keeps reminding us that David Spade is there too.

Why do none of these movies have the courage to stick to their repulsiveness? It wouldn’t necessarily be good but it would be consistent for them to have some convictions with their misogyny and braying hatred of crazy b*tches. The Wrong Missy may try to ‘subvert’ that (and boy, do I use that word loosely) by pretending that it cares about Missy’s ‘quirks’, but there’s no effing consistency to this pseudo-moral about staying true to your weirdness. There’s oddness and then there’s knife-carrying molester weird. If you’re going to pull that crap then be brave enough to stick to the grotesqueness of your narrative. Hell, I think Spade and Lapkus would be a solid pair to pull off a story about a genuinely dangerous woman and the terrified man who’s stuck with her but may get some sort of weird sexual thrill from the possibility that she’ll kill him in his sleep.

I’m not sure why this dishearteningly predictable copout bothered me so much given that it’s practically a legal requirement for Happy Madison’s output. Maybe it’s because Lauren Lapkus is a precious and sinfully underrated gem of American comedy who deserves a whole array of star vehicles shot in exotic locales, and yet this is all that Hollywood will give her. How did Jurassic World end up being a better Lauren Lapkus vehicle than an actual comedy movie produced by one of the biggest names in the business? But come on, you knew what this movie was going to be like when you saw it was a David Spade/Happy Madison joint. At least this one isn’t as mind-thuddingly homophobic or transphobic as too many of these ‘comedies’ often are. This is merely garden variety misogyny masquerading as some bastardized form of empowerment. Someone give Lauren Lapkus the funds and support to make her own movie.

The Wrong Missy is now available to stream on Netflix. If that’s your thing.

← 'Thanks, Celebrities' Succinctly Nails the Societal Sickness that is Celebrity | 5 Shows After Dark: 'Survivor' 40th season finale on CBS, 'The Masked Singer' on Fox →