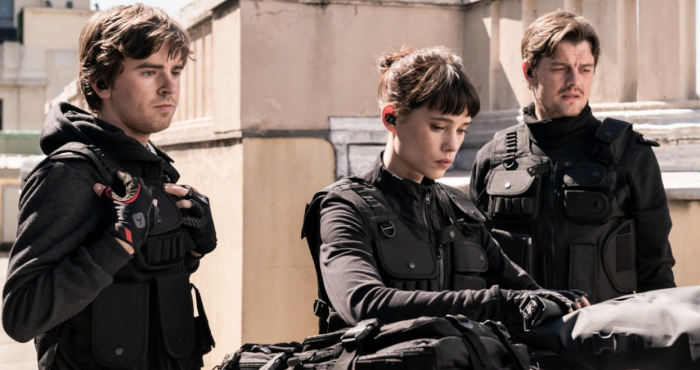 If you make a big heist movie with a lot of characters and a number of moving parts, your film will invariably be compared to Steven Soderbergh’s Ocean’s 11. That comparison will almost always work to the film’s disadvantage (unless that film is another Soderbergh heist flick, Logal Lucky), and it’s certainly the case for Jaume Balagueró The Vault, a solid, though unremarkable meat-and-potatoes caper.

Not every heist movie, however, has to reach the heights of the Ocean’s films to be considered a success. The Vault probably fits under the afflictive category of “Dad Movie,” the qualities of which are hard to pinpoint unless it’s a movie that stars Liam Neeson or is based on a true story concerning a sports figure or a car. Dad movies work because the target viewer does not demand too much but still expects to be entertained. That’s The Vault to a tee. It’s entertaining enough.

Freddie Highmore stars as Thom, who has apparently carved out a niche as the prodigy type (see also: The Good Doctor). Here he stars as an in-demand, fresh-out-of-college engineer who is being heavily recruited by the oil-and-gas industry. Bored by the prospect of helping oil companies dodge their responsibility to the environment, Thom entertains an offer from the mysterious Walter (Liam Cunningham) to put his skills to better use: Breaking into the most secure vault on the planet, a vault that was designed 80 years prior and which contains coins that provide the GPS coordinates to another fortune (for the sequel, see?). The vault is inside of another fortress, The Bank of Spain, and the team of heist stereotypes (the computer guy, the muscle, the pickpocket) plan to use Spain’s participation in the 2010 World Cup final as cover for their heist.

The catch is that there’s more than a long prison sentence at stake. No one understands the mysteries of the vault, and a failed attempt to crack the safe will result in the vault filling with water and drowning anyone inside. Thom is thus tasked with using his engineering skills to figure how to get in without setting off a flood. The bank manager, meanwhile, suspects that a team will attempt to break into the bank during the World Cup and plans to closely surveil the situation from afar on video monitors instead of surrounding the vault with security personnel because this is a movie and we afford characters a certain amount of stupidity.

Highmore is believable as a prodigy, although he is not believable as a potential love interest to Lorraine, the pickpocket (Astrid Bergès-Frisbey). Cunningham is sufficiently gruff, and Sam Riley is adequately bland, which actually works to the film’s advantage. Famke Janssen does what Famke Janssen does, which is to look both amazing and untrustworthy. It all unspools as we expect it might, and while there are no major surprises (even the “twist” is expected), it’s a well-executed heist flick. Jaume Balagueró lines up all the dominoes and knocks them down without a hitch, and even if we know exactly how they’ll fall, it remains a satisfying experience as long as you keep your expectations in check, Dad.


← I Read This Book About a Housewife Who Has Sex With a Hot Frogman & I Have To Tell You All About It | 5 Shows After Dark: 'Fantasy Island' Premiere Fix, 'DC's Stargirl' Second Season Premiere →