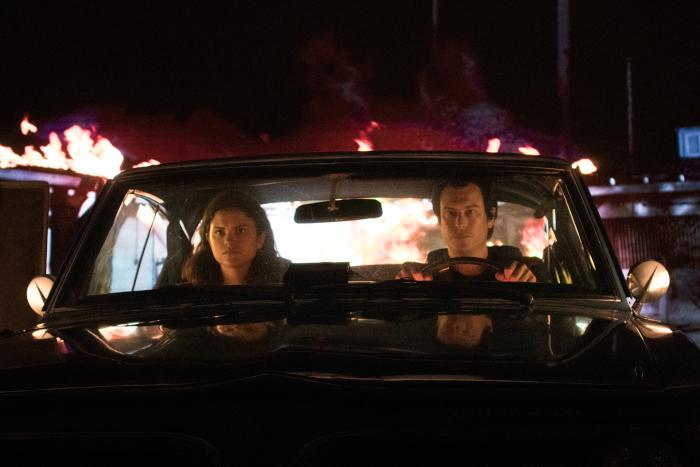 Shudder's 'Blood Relatives' or As I Like to Call it, 'Farkakte Mishpucha'

Not all blood is made from corn syrup, but that doesn’t mean it can’t be sweet. In his directorial debut, Blood Relatives, Noah Segan has captured the sweetness of blood not just as something that connects us, but as a delicious treat for hungry vampires.

Segan leads his own project (he wrote and directed) as Francis, a centuries-old vampire trying to lay low in the modern world. Francis hasn’t aged since he was turned by Nazis during the holocaust, and he makes his way through life clutching to survival and keeping a low profile. His world is rocked when Jane (Victoria Moroles), a teenager, shows up claiming to be his daughter. Jane is on her own and at risk of landing in foster care, so she has been tracking her father looking for a parent and answers as to why she craves blood. Initially resistant to taking on a progeny, Francis comes to terms with being there for his daughter and the two work on settling into the closest thing to a normal life available to them. Along the way, they both stumble, Francis figuring out what it means to be a father and Jane figuring out what it means to be a day-walking vampire.

The blood is secondary in Blood Relatives, which might be a result of constraints but works to highlight the film’s core. This is a simple story about parenthood and a fluid thicker than water, the feasting element being a background metaphor for something bigger. And that something isn’t just family, but also about Judaism. Segan’s cute little bloodsucker story feels like a mediation on fatherhood mixed with what it means to pass your bloodline onto a young person who might not understand it. Victoria doesn’t know much about what makes her different, but she knows she needs sunscreen and has an appetite for flesh. It’s implied by the crosses decorating her mother’s cousin’s home that Judaism is new to her too, so Francis’s vampirism and Judaism are linked here as elements this new father is tasked with teaching his offspring.

It’s as simple as that, and that’s what makes it a charming joy. What calls itself a horror comedy reads like a father scurried up to his room one night and penned a note to his younger self, or to the future version of his child, as a means of reflecting on the rewarding and difficult job of being a parent. Segan’s earnestness spills onto the screen in the writing and direction and works well to juxtapose his character. His high-pitched voice and natural sweetness paired with his vampire gaze and leather jacket make for a compelling vampire-dad character. But the star of the show is Moroles who embodies the frustrated daughter in a way that made me swear she was the voice of Bojack Horseman’s Hollyhock. She balances her performance as a screeching teen daughter ragging on her dorky father with necessary emotional affect to sell her position as inquisitive and in need of the parental guidance her mother could not have offered.

Billed as a road trip movie, the characters zip around locations sandwiched between driving shots that have no sense of movement. As a result, the locations don’t feel very important and there’s no sense of distance so it’s hard to know when the story is staying or moving. Francis appears where he needs to be with the magic of a red-block-letter title card, never out of breath or in a rush (but I guess I’ve never seen a vampire short of breath, anyway). Deadpan comedy is blended with emotional scenes in intentional ways to create balance. While it doesn’t always work, it does feel reminiscent of the Jewish experience of making uncomfortable jokes during a shiva (or less specifically, the Jewish experience of using humor to react to our bleak realities). Some moments are hammy or sometimes full of plot conveniences but it feels in the interest of keeping the proverbial show on the literal road.

Though it maybe didn’t need the full 90-ish minutes to make its point, the movie capitalizes off the sweet and delightful tone in a way that makes you want it to keep going. Its final note is hopeful and closes the movie much earlier than the story.

Blood Relatives has the vibe of DIY filmmaking that’s got a beating heart bigger than its Yiddish slang. It’s near impossible not to be charmed by the characters’ father-daughter dynamic and the unapologetic use of klezmer music.

← Review: 'Skinamarink' Is Gonna Scare You Right Back To The Dark Ages | 'Mythic Quest' Makes a Triumphant Return for Season 3 →