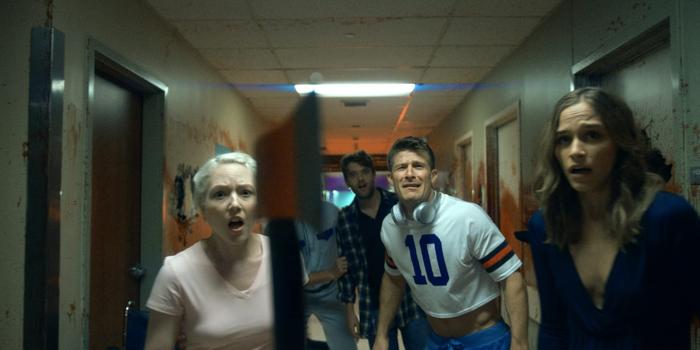 Review: 'Scare Package' Is A Horror-Comedy Anthology That Really Delivers

Many scary movies begin with one wrong move. Moving into the wrong home, taking a wrong turn down a dirt road, or toying with the wrong plaything. But have you ever wondered about the realtor, road worker, or doll curser behind these fateful decisions? Well, his name is Mike and he’s the first curious character introduced in Shudder’s new horror-comedy anthology Scare Package.

Emily Hagins’ “Cold Open” is a clever kickoff, introducing audiences to the film’s irreverent tone—and its love of blood—through following the poor schmuck (Jon Michael Simpson) whose job is to set up a loving family or rowdy co-eds for horror. But he longs for more! Once his twisted tale is told, Mike hands the reigns off to a smirking mustachioed stranger named Chad (Jeremy King). He is the proud proprietor of Rad Chad’s Horror Emporium, a movie rental shop that serves as the framing device for the film. In between lackluster bits wherein Chad banters with a creepy customer and a spooked new clerk, Scare Package leaps into the scary VHS movies that surround them. The directors tackle stories of cursed candy, perturbing possession, malevolent ooze, resilient slashers, and whining werewolves. Each brings their own spice to a recipe full of silliness and scares.

Along the way, it’s exciting to see how the helmers shake up their subgenres. You might recognize Noah Segan from his appearances in every Rian Johnson movie. Here, he’s cast himself as the leading man in a werewolf tale in which MRA activists who dream of being Alpha Males form a literal wolf pack. With a cameo from a simpering Allan McLeod (You’re the Worst), this segment has a real bite of Schadenfreude fun. With “Girls’ Night Out Of Body,” writers/directors Courtney Andujar and Hillary Andujar deliver a familiar setup: Beautiful young women partying, oblivious to the heavy-breathing offscreen stalker whose voyeurism promises impending violence. However, things take a turn sweet and savage, giving precisely the kind of punch you might crave in a horror short. Also a treat, comedian Baron Vaughn makes his directorial debut with “So Much To Do,” a haunting short that begins legitimately spooky. Then, Vaughn introduces his kick-ass heroine (Toni Trucks), who has no patience for the paranormal or spoilers, so let’s press on.

These movie-within-a-movie vignettes are all solidly fun, delivering twists that will thrill horror fans who know their tropes, and buckets of goop, gore, and gloriously goofy violence that playfully mocks our never-ending thirst for carnage. With all these bits, we are in on the joke, part of a community that’s being ribbed by filmmakers who share our dark love of horror of gore. However, while the Chad stuff works as a framing device, it never rises to the level of the shorts its tying together.

Chad and his creeper customer are how horror fans have long been stereotyped: White, straight males who consider fandom a competition. In the film, these two are constantly trying to one-up each other on obscure titles and trivia, which is true to life when it comes to a more toxic element of cinephile culture. However, horror as a genre and a fandom are far more inclusive than this duo of dudes represent. The film itself shows this, offering filmmakers and stars who aren’t all white guys. Still, director Aaron B. Koontz seems captivated by Chad, giving him scads of screentime and letting him play hero for much of the clunky final chapter “Horror Hypothesis.” Trapped in a scary scenario, Chad believes all his knowledge of tropes will save the day. While this short subverts a few of his expectations, it also tries to score easy laughs by falling into clichés like killing the Black character early on and labeling a young woman in a v-neck dress a “slut” doomed for death. After so many stellar shorts and sharp subversions, this final act feels disturbing only because it’s such a disappointment.

Anthologies are by their nature a mixed bag, so some duds are to be expected. Despite all the clunkiness and cliché of the Chad bits, Scare Package succeeds overall, delivering enough good vignettes to keep audiences howling with laughter.

← Following Her Vagina-Scented Candle, Gwyneth Paltrow's Goop Releases An Orgasm-Scented One | This Week on Podjiba: 'I May Destroy You' and a 'Search Party' Game! →