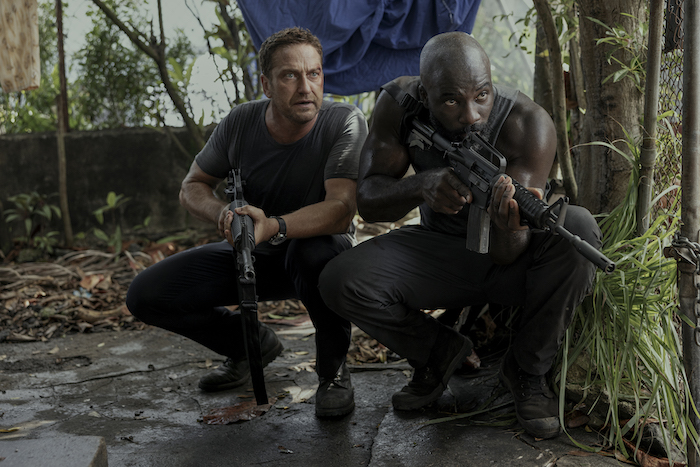 January is where movies go to die, quietly and in shame. The “January dump.”

The post-holidays new year box office is a notoriously barren land. There are the holdover hits from the holiday movie season (see: Avatar 2) and perhaps an opportunistic mid-budget horror primed to take advantage of the quiet (see: M3gan), but generally speaking a January release is the worst thing that can happen to your movie besides being Batgirl-ed. A January release date says, “we’ve given up, let’s just get this over with.”

Another thing that says, “we’ve given up, let’s just get this over with,” is releasing a movie entitled simply Plane, and it is at the top of the list of reasons why this new action-thriller starring Gerard Butler might just be the January-est movie ever made.

Plane is the nth variation of the everyman dad-hero action flick that Butler has made his niche, following closely in the footsteps of such predecessors as Angel Has Fallen (et al.), Greenland, and Geostorm. This time around, the hero of the hour is named Brodie Torrance, and in the clunky opening scenes the film is keen for you to understand three things: he is Scottish, proudly scrappy, and he has a daughter. He is also a widower, for depth. For some extra flair, Butler even gets to go with his natural Scottish accent. Did I mention Brodie is Scottish? Plane really hammers in this point in the opening minutes, although there are times later on when Butler himself seems to forget. Look, the man may be actually Scottish, but the accent goes up and down even more than the titular aircraft. And in case you are wondering—yes, every character name in this film sounds like it came out of a Tom Clancy name generator. Moving on.

Torrance has one last Singapore-to-Tokyo flight to finish before meeting his daughter in Maui for New Year’s Day. There’s inclement weather anticipated en route, but he flies for penny-pinching Trailblazer airlines—think Spirit mixed with Ryanair and a dash of Southwest sass—so they order him to fly through the storm as taking a detour would add $12K in fuel costs. This corporate logic is perhaps one of the most realistic moments of the movie, except for the part where the airline doesn’t just cancel the flight with only 14 passengers on it anticipated to hit dangerous weather, but I digress.

Anyway—plane hits storm, lightning hits plane, plane goes crash on an island in the Philippines run by a poorly defined anti-government militia group keen on kidnapping all the passengers for ransom. To add some spice to the mix, one of these passengers is convicted murderer Louis Gaspare (Mike Colter), in the process of being extradited by the FBI. But don’t be worried, civilians, he’s got an armed police escort. (Spoiler alert - armed escort is too dumb to live and dies leaving his seat to retrieve his dropped cell phone while the plane is actively crashing.)

Beyond Gaspare, there is Blonde Girl, Brunette Girl, Bald Guy #1 (knockoff Jason Statham), Bald Guy #2 (other), and The Rest. We also cannot forget friendly family-man copilot Dele (Yoson An) and flight-attendant-vaguely-reminiscent-of-Olivia-Benson, Bonnie (Daniella Pineda). This is not the sort of film where characters or relationships have arcs, this is the sort of film where supporting players are lucky if they have a trait, singular. The militant group doesn’t have a distinctive personal trait between them collectively.

Plane is the sort of movie your dad will put on when flipping through channels and you’ll ask him, “haven’t you seen this one before?” He’ll insist he hasn’t. But then, maybe half an hour later, there will be a particularly big “bang” or “boom” and suddenly his brow will furrow, and he’ll go, “wait, actually, I have seen this one before.” He will still proceed to re-watch the whole thing anyway. And then repeat this whole process in a couple years’ time.

Plane is now playing in theaters.


← Review: 'Hunters' Season 2 Makes Too Big a Matzo Ball | 'The Last Of Us' Recap: Pedro Pascal Vs. The Fungal Apocalypse →