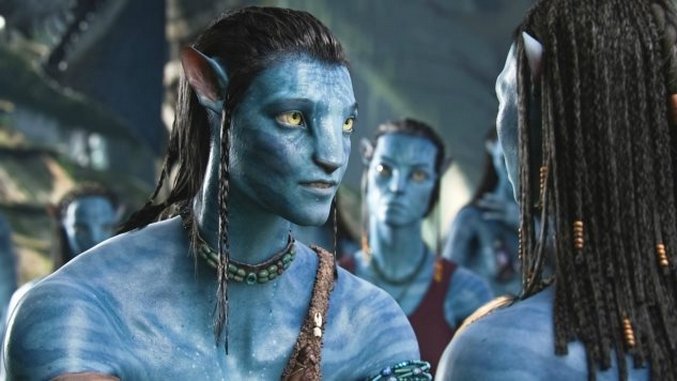 In 'Avatar: Way of the Water,' James Cameron and His Ego Just Can't Help Himself

The simplest — and perhaps most reductive — way to review Avatar: The Way of Water, James Cameron’s massive, CGI-laden opus is to state the obvious right off the bat: it’s better than the first one. For some, that’s high praise. For others, it’s a hell of a low bar. The first one is a messy bit of cinematic history, a testament to Cameron’s hubris, his technical skills, but also his storytelling weaknesses. It’s beautiful and impressive in many ways, but it’s also rife with cliches, clearly borrows from better stories, and is hampered by a dry, unengaging lead (Sam Worthington).

Yet that was then and this is now, and 13 years later we finally return to the planet Pandora. Jake Sully (Sam Worthington) is now fully enmeshed in the life and culture of his Na’vi family, with partner Neytiri (Zoe Saldana) and four children, one of which includes an adopted daughter, Kiri, somehow immaculately conceived from the inert avatar of scientist Grace Augustine (Sigourney Weaver, who also plays Kiri). Their life among the trees and creatures of Pandora seems blissful until the inevitable return of humans, this time with even more sinister intentions than in the first film. Chief among those antagonists is Colonel Miles Quaritch — who died in the first film, but whose memories and persona have been implanted into a Na’vi clone called a Recombinant.

Determined to bring the Na’vi to heel after Sully leads them on a guerilla campaign against the invaders, Quaritch and a team of Recombinants begin hunting Sully and his family, driving them from their tribe. Eventually, they seek refuge with the Metkayina, a reef-dwelling tribe of Na’vi who take to the waters as adeptly as the Sullys once took to the skies.

I won’t delve much further into the plot, first for fear of spoiling but also because there’s just so much of it. There’s no possible way to discuss The Way of Water without discussing its overstuffed, sometimes-grueling 192-minute runtime. There is undoubtedly much to love about the film, and we’ll get to that next, but if there is a chief criticism, it’s that Cameron seems determined to cram a miniseries worth of story into a single film, and it often makes it feel like something to be endured rather than enjoyed. The worldbuilding in The Way of Water is significantly better than its predecessor, with Cameron vividly imagining new lifeforms and technologies. Yet his single-minded determination to show you just how damn brilliant and beautiful it can be often works against the film, dragging out sequences past their welcome point.

This is an unfortunate byproduct because frustratingly, the film is lovely. Its finest moments are when it pulls back from the conflicts between the humans and Na’vi and lets you blissfully languish in the lushness of its waters, enjoying the Sullys as they learn a whole new part of their world. Cameron’s technological leaps are unquestionably stunning, with shimmering, rippling water effects that embrace any audience member willing to suspend their disbelief (and some of the fundamental silliness of the dialogue and mythology). The Metkayina are a fascinating evolution of the Na’vi, culturally and biologically distinct from their tree-dwelling cousins in as many ways as they are similar.

When the film ramps up its action sequences, it’s similarly impressive. The final showdown is a breathless seat-grabber that deftly draws in the audience, manipulating emotions and drawing gasps from the viewers. Yet there are other places to find excitement as well — Sully’s children taming their water-dwelling mounts is a thrilling bit of kid-friendly adventure, and the rapport with a species of cetaceous-type behemoths is remarkable to watch. The problem is that every single scene goes on just a little too long, or in the case of the climax … a lot too long. Cameron can’t help himself and seems determined to use ten words when five would do.

The story itself is a mixed bag. When it gets out of its own way and simply lets its characters be, it works. Worthington is definitely better than in the previous film, though that’s saying little, and the film is bolstered by focusing more on his children than him. The kids are precocious upstarts, but not annoyingly so, and watching them struggle and eventually bond with the new tribe is nicely done. It’s also where the motion capture fails the film the most - it feels like the younger the character, the less believable the portrayal is (don’t get me started on the hilariously weird Na’vi babies who look like toothless Stitch babies). It’s difficult to get past the heavy-handedness of the storytelling, though. The bad guys are capital-B Bad, and the good guys - even the ones that the Sullys clash with, are Very Good. There’s little in the way of nuance in any of those portrayals and even the performances of veteran actors like Cliff Curtis and Kate Winslet (as the Metkayina leaders) can’t do much about that.

Cameron has never been much for subtlety and that’s no different here. The colonial allegory isn’t so much an allegory as it is a slap in the face, and the near-fetishization of tribal peoples is often squirm-inducing. It’s not helped by the fact that the saviors are mostly either originally colonizers or his descendants). I mean, there’s a magical girl immaculately conceived by someone named Grace, whose mysterious powers might save the world. That’s not subtlety, that’s a hammer with THIS IS IMPORTANT stamped on the head. While I appreciate the idea of a people who live with their world rather than simply taking from it, the graceless storytelling is often at odds with its lush visual depictions.

The Way of Water is absolutely a marvel to behold and if you’re going to see it, it really is best served on the biggest, most impressive screen you can find. I saw it on a 3-D IMAX screen, and it was hands-down the best experience of its kind I’ve seen. Its sound design is flawless, bolstered by a great score, its visuals are amazing, and it’s often just damn fun. Yet the missteps are inescapable, and so many of them are due to Cameron’s ego that no matter how much you may enjoy its beauty in the present, it’s hard to look back on it without remembering the flaws.