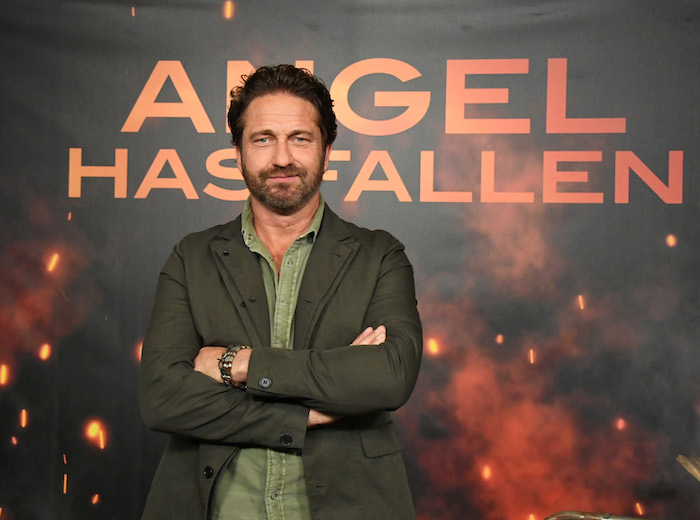 Friends, I am wrong about Gerard Butler and I need to come clean.

Since my time at Pajiba, I’ve kind of treated him like a piece of furniture that I once coveted and saved up for but as I’ve gotten older, have allowed it to melt into the tapestry of my home, not paying attention to it anymore. No longer a showpiece, it’s just there. I’ve taken for granted that Gerard Butler will always be there, being, well, Gerard Butler, and making action movies for us.

No f*cking more. We need to put respect to that man’s name and celebrate him for what he is—who Bruce Willis should have been, had he not gotten full of himself and launched Planet Hollywood and fancied himself a harmonica-wielding musician.

After a rough couple of weeks, I decided to treat myself to a showing of Angel Has Fallen. I wasn’t super excited about the prospect because London Has Fallen was kind of dumb in a bad way, but hey, it’s Thursday so why not?

F*ck me, it was excellent.

Now, for perspective, I’m not someone who really likes “good” things. Occasionally a “good” movie will come out and I’ll enjoy it, but that’s because I enjoy entertaining things, and sometimes “good” and “entertaining” will overlap (see: Widows) but oftentimes, for me, they do not. It should be no surprise to you that my favorite time of year for movies is the late-summer blockbusters, and I usually scrape by to try to find anything to see in the theaters come “prestige” time, at the end of the year. (Side note: Cats is an obvious exception this year because there’s no way this movie is going to be good, but I suspect, with my friend alcohol as a guide, it’s going to be very entertaining.)

So, within that framework you can understand that Angel Has Fallen is by no means a “good” movie, but it was highly entertaining because a lot of s*it got blown up by Gerard’s hand and by people trying to blow up Gerard’s hands.

Here’s where respect for Gerard Butler needs to come in.

Let’s be honest, he does not really make good movies, but he does make some of the most entertaining movies around and has since the beginning of his career. This is a dude who was in both Timeline and Reign of Fire—and we need to start showing him the respect he deserves.

Why? Because he plays every f*cking role he has in these stupidly entertaining movies as straight as he possibly can, and with gusto!

Without spoilers (although can you really be spoiled by an action movie? Don’t we all just come to see s*it blow up?!) he gets into real shenanigans in the third movie in the Fallen series—now, keep in mind, if you thought about this franchise for a nanosecond and the real-world implications the first two movies would have, by the third his character Mike Banning would be a godd*mned national hero, highly decorated, and filthy rich due to his inevitable book deal and the rights he sold to his life story, not to mention all the government contracts that would pour in from around the world to have him audit their security protocols. He should be retired, living the good life in a luxury condo that sits above a mall and a Cheesecake Factory, because you never want for anything in a place like that. However, in this universe, the man who single-handedly got back the White House from the North Korean terrorist organization that blew half of it up (because f*ck yeah they did, it was awesome, too!) and who is the same dude who a few years later saved the president, again, from another terrorist group that blew up half of London (f*ck yeah they did, it was less awesome, but still OK) and killed the Director of the US Secret Service in the process is still considered an everyman. Thus, it’s plausible that he could get framed for trying to kill the president because he wanted a measly 10 million dollars for the hit. Please. He could charge 10 million dollars for just one security protocol audit in the real world—and yet here, he’s just a guy getting by, man!

Why is this important? Because Gerard Butler never plays him like a real f*cking person! He never stops and bitches that once again, he’s in a position of having to prove himself and his loyalty to his country, and couldn’t the events of the past two movies buy him a little bit of f*cking credibility?

No. Gerard Butler takes the weight of the world on this man’s shoulder and gets down to the business of blowing s*it up, because that’s what we came for, dammit—and he delivers on that every damn time.

He never takes you out of the moment to do a wink wink, nudge nudge to the audience and he doesn’t get enough credit for that. Although this Vulture late last month has the right idea. We all need to appreciate this man, more.

In my estimation, he’s never pulled that with the audience, either. Not when dragons are burning people alive in Reign of Fire, by some happenstance and political intrigue he’s tasked with rescuing the Russian President on his sub in The Hunter Killer, when he’s revealed as f*cking Judas Iscariot in Dracula 2000 because of course Judas would be the first vampire, ever, and he certainly doesn’t do that as Secret Service Agent Mike Banning in the Fallen movies. He accepts the premise with no hint of irony and only grit and delivers on what he’s called to do, without ever drawing attention to the fact the plot, dialogue, or even movie is objectively terrible.

Now, compare that to my other favorite action hero, The Rock, wo is a walking ironic self-referential actor. Always trying to let the audience know that whatever the joke is, he’s in on it, OK!?

Gerard Butler’s characters are never in on the joke, and more importantly, usually have more important things to do than joke, like blow s*it up, OK?!

We need to show this man some damn respect going forward, and I personally will stop taking his presence on screen, blowing s*it up, for granted because he’s the last of the action stars working today who’s clearly not counting punches to make sure he looks like the good guy, or even really worried if the movie is going to make sense. He comes in and does the damn work. Personally, I hope he continues to make glorious action movies where a lot of s*it gets blown up, for years to come, and never succumbs to that thing actors do where they try to get a damn Academy Award. Gerard Butler doesn’t pander for accolades and hardware, and he should be celebrated for that, too.

Thank you, Gerard Butler. I respect the hell out what you do, and it’s time we appreciate you more, sir.

Now, please give us another installment in the Fallen series because seriously, Angel Has Fallen was by far the best yet, and yes, I’m saying that because basically an entire mountain got blown up in your pursuit of entertaining movies.