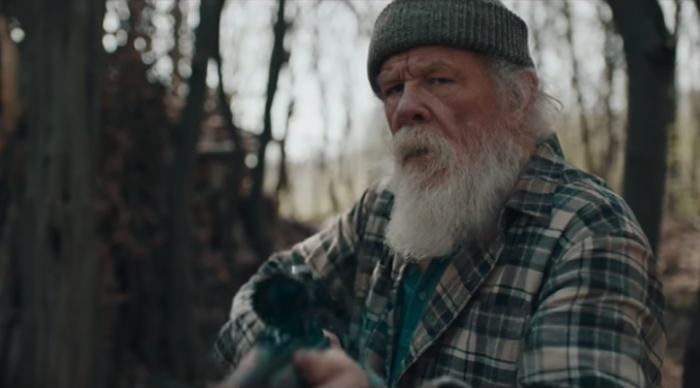 You know, I generally try to look at the bright side of things, and can usually sniff out at least one redeeming feature in even the most steaming of cinematic turds. Which is why I’m here to tell you that there IS, in fact, one reason to watch Angel Has Fallen, and that reason is Mountain Man Nick Nolte. I’m aware, in the vaguest terms, that this film is the third in a series — a series about places and/or people falling, I guess? — and while I’ve never seen any of the earlier efforts and can’t tell based on this one what, exactly, the overall appeal is supposed to be, I’d show the hell up for a spin-off trilogy centered on that beautiful, beautiful man.

But let me back up. Angel Has Fallen returns to the “Get Down, Mr. President!” exploits of Secret Service Agent Mike Blandman… er, Banning (Gerard Butler), who is now assigned to protect President Morgan Freeman. Unfortunately for all involved, President Morgan Freeman is an avid fisherman, and even MORE unfortunately, somebody wants to kill him via drone strike. But hey, that’s what Agent Buffguy is there for! While literally EVERY OTHER PERSON on their fishing trip gets blown the hell up, Agent Brrrrft narrowly thwarts the assassination attempt and saves the president’s life. They both wind up in the hospital, where Morgan Freeman is in a coma and Whatshisface wakes up in handcuffs.

Yup, you guessed it! He’s been set up to TAKE THE FALL for the assassination attempt, which is hilarious because it’s obvious, at least to me (who has watched exactly 20 minutes worth of footage of this character at this point, never mind 2+ movies), that this guy doesn’t have the brain capacity to nefariously free himself from a wet paper bag, let alone hide Russian money in an offshore account then launch drones at himself from a van parked near roughly 30 Secret Service agents. Anyway, nobody pauses for even a second to think that maybe the guy who has a track record of saving presidents wasn’t trying to kill one just now — nobody except his wife, who is now played by Piper Perabo, but she’s too busy taking care of their daughter to do more than yell about it at FBI Agent Thompson (Jada Pinkett Smith).

So surely the big question of the movie will be discovering who is really trying to kill the president — or it would be, if this movie didn’t make it painfully obvious who the actual culprits were from the very start. Looking at you, two new characters who are either close enough to Agent Banal to set him up or close enough to the president to want him dead! It’s almost impressive how this movie manages to run for two whole hours without letting even a hint of suspense distract you from Agent Bobvious’s dull trudge to redemption. And trudge he does, dully! Thanks to plot contrivances, he makes a not-so-daring escape from captivity and seeks a safe haven where he can regroup. Enter Mountain Man Nick Nolte, a.k.a. Agent Baffling’s survivalist daddy! What follows is basically the one sequence in the entire film that justifies its existence, as Mountain Nolte and Agent Guy throw feelings at each other before setting off ALL THE EXPLOSIVES EVER. Honestly, my knees get weak just thinking about the boom-booms.

I mean, I could go on but let’s face it — we all know exactly how this one is going to end. We knew from the start! Even I knew, and I’m new to this franchise. So let me just sum up the rest of my impressions in a bullet-point list, because why put more effort into making this review cohesive than the filmmakers did?

— Jada Pinkett Smith is pretty great, and while she’s given basically nothing to work with here, she looks WONDERFUL in her little knit hat.

— Lance Reddick is ALSO in this movie, and he is ALSO wonderful and ALSO underused. Watching this reminded me of John Wick 3 — not in terms of quality (duh), but in terms of me spending the entire runtime fervently hoping Lance Reddick survives the shooty bits. Want me to get emotionally invested in your movie? Put Lance Reddick in it, and give him something to hide behind while people point guns at him. INSTANT EDGE-OF-YOUR-SEAT MATERIAL, FOLKS!

— A major plot point is that Agent BeRightBack is tired and getting old and his injuries are catching up to him. And the moral, courtesy of Mountain Nolte, is that sometimes you just need to know when to quit. So, like, at least this threequel had enough self-awareness to basically admit that the franchise needs to give up, already.

— One thing that was almost interesting was the focus on the traumas of being a soldier. Mountain Nolte basically f*cked off into the woods because he doesn’t trust the government, thanks to his own military service during Vietnam. And while nobody really talks about it with any specificity beyond a vague sort of “it makes you crazy,” it becomes something that the father and son end up bonding over. In fact, the movie makes a point to end on an anti-toxic masculinity note where they both seek treatment and support each other. It’s played for laughs, but it also surprised me that goddamn Angel Has Fallen even attempted this sort of message. So, kudos I guess?