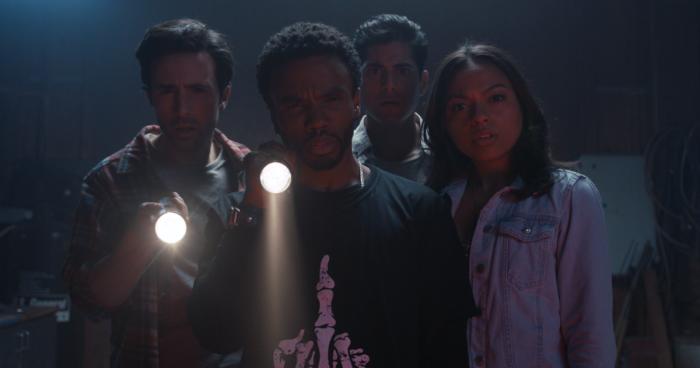 I’ve got this theory that loving a particular genre means that the bad entries in the genre still bring you joy. Anybody can like the great ten percent of books and movies, they transcend their genres entirely. But that bottom ten percent? If you see the beauty amid the wreckage and take joy in the thin slivers of originality buried amid the dreck and derivative nonsense? That’s when a genre is your home. Could be sci-fi, fantasy, romance, mystery, hipster memoirs about their mason jar collections, or other existential horror genres.

Sci-fi is that way for me. Toss a spaceship onto your movie poster, and I’m probably halfway to loving it.

All that is to say that even I found nothing redeeming about Useless Humans, a singularly useless movie that fails to have even a glimmer of originality, humor, or entertainment value.

The movie introduces us to a group of four friends who are going to a cabin in the woods for the thirtieth birthday of the obligatory whiny failure of a man child. He has an engineering degree but works at a dead-end job as the projector at a planetarium. A job which he quits because he wants to go get wasted all weekend with his friends. I mean, most films would try to make their protagonist likable. Or relatable. Or someone you could at least empathize with, but no, Useless Humans is doubling down on its title by making sure you hate the characters.

Said whiny failure of a man child’s friends are additional testaments to cut and pasting from cliched tropes. There is exactly one woman, because the appropriate ratio of men to women in any bad movie friend group is always 3 to 1. She is of course successful at her job, and the man child is creepily in unrequited secret love with her.

There is also an obligatory black guy, because all bad movie friend groups have exactly one black guy. He’s a criminal. Because of course he is.

In a shocking turn, the fourth friend group member is not a wacky fat guy. Instead he’s an Indian guy who is a doctor who hates his wife and kids. Whew, almost did something original there until they remembered that everyone from the subcontinent is an overachiever and that it’s endlessly hilarious for dudes to hate their off-screen families.

Anyway, these four loathsome cardboard cut outs who haven’t seen each other since college assemble at a cabin in the woods for the weekend to get wasted. Because that makes sense.

Yes, the characters are lame clichés barely fleshed out enough to cast a shadow, but it’s just a spoof sci-fi movie, surely that’s not the point? Well, it’s a seventy-minute movie and the first half hour of it is dedicated to slowly introducing these characters and setting up their weekend. Thirty. Minutes.

The movie sets itself up to be a spoof sci-fi film in the vein of Shaun of the Dead or Paul. However, it entirely misses the mark and ends up basically feeling like Scary Movie 3, except with shallower characters, worse writing, and no jokes. There are extended stretches where actors are awkwardly and unconvincingly reading out lines in the vague approximation and pattern of a series of jokes, but it’s like the concept of humor is something once explained to them second hand and they’re now trying to convey it via charades.

For instance, there’s a scene in which two characters argue over who should siphon the gas from a car because doing so involves sucking and obviously the female character is more qualified to do so. Such incisive commentary on science fiction specifically and the human condition in general. “Sounds like my last relationship!” is used as a punch line. Hey-oh! I guess turning your rejected Two and a Half Men scripts into a movie with a rubber alien is certainly a choice.

Oh yeah, there’s a rubber alien trying to kill people. Power goes out. There’s a government agent and a scientist who only speak in monotone exposition. There are a handful of halfhearted references to stuff like Stranger Things that don’t land. And then it finally blissfully ends. It was seventy minutes and would have been too long at seven minutes.

Nothing about this movie works. It feels less like a small independent movie and more like something cobbled together at the last minute for a student film project. If a friend of mine was an aspiring filmmaker and showed me this film as their student project from a class, I’d ask if it was too late to switch majors. Don’t pay money for this movie. If you must spend the money, do something useful with it like lighting it on fire, as the few seconds of pretty dancing orange will be more entertaining.


← Review: If You Still Feel Joy, 'The Painted Bird' Can Fix That | Jim Carrey is Insufferably New Age These Days, But Has an Interesting History with Sam Kinison →