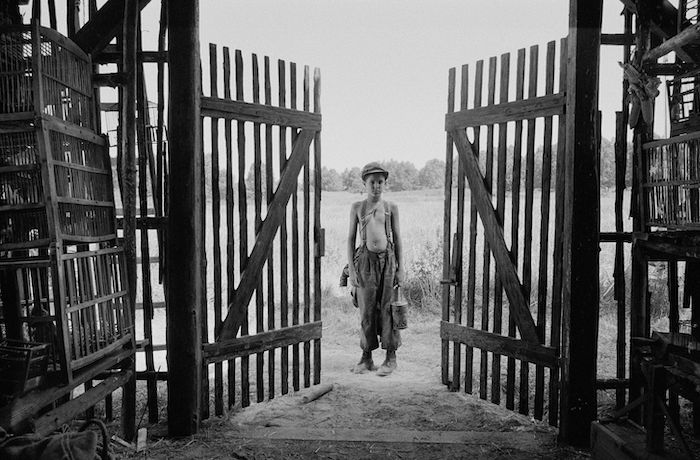 Review: If You Still Feel Joy, ‘The Painted Bird’ Can Fix That

The depths of human depravity, but make it fashion.

This seems to be the motto of The Painted Bird, the new film from Czech writer-director-producer Václav Marhoul, adapted from Jerzy Kosiński’s 1965 novel of the same name. To be fair, it is very much in keeping with the spirit of the book, which holds the dubious distinction of being one of the only novels that has ever left me feeling physically ill.

Set during WWII, the story follows a young boy sent away by his parents to the countryside to escape German prosecution. However, when the elderly woman caring for him dies, he is left to fend for himself, drifting through rural villages as he attempts to make his way home. In the book, the boy is nameless; the film calls him Joska (Petr Kotlár). The film takes the unspecified Eastern European setting one step further by being the first film to feature the Interslavic language, presumably because Marhoul doesn’t want to burn any bridges by angering an entire country by foisting this tale of horrors upon them.

While hardly the only tale to explore humankind’s bottomless capacity for cruelty in the context of the Holocaust and the Nazi regime, The Painted Bird is quite distinctive in that while concentration camps and SS Officers lurk around the edges, occasionally jumping into the action, this background really lays a foundation onto which a wide and truly creative range of further atrocities are then piled.

What makes the novel distinctive is not just the smorgasbord of atrocities so garishly on display, but the vividness with which they are rendered, and the particular voice of the first-person narrator recounting his horrifying journey. The book opens with an introduction that sets the scene before throwing you into the boy’s head. The film instead seems to make a point of striving for opacity, even though it’s already translating the story to a medium where clarity in such matters is inherently harder to achieve. While in the novel, the boy turns mute after one particular instance of torture, Joska says barely anything from the word “go.” Young newcomer Kotlár does a commendable job in the physically demanding and mostly silent role. Still, while his expressiveness is impressive the film ultimately presents an impenetrably opaque surface. You can only watch it at a distance.

The actual storyline on display in the film is a puzzle piece made of breadcrumbs, where the flow of cause and effect, motivation and backstory are often hinted at in shards of information that are easy to miss, especially when you’re busy reeling with thoughts like ‘ohmigod that’s an eyeball’ and ‘why did I agree to this?’ The film tosses you straight into the deep end, opening with Joska carrying an adorably fluffy ferret, racing through the woods with an angry-looking gaggle of other boys in hot pursuit. Chased down, pinned to the ground, and beaten, Joska is then forced to watch as one of his tormentors douses his pet in gasoline and lights it on fire. Why? In the absence of an actual specified answer, “because people are terrible” seems like a fitting bet.

The ferret’s incinerated remains fill the screen around the two-minute mark, and from there, to quote Edward Gorey, “things do not get better, but worse.” The rest of the film features travesties including but not limited to rape, pedophilia, murder, bestiality in the form of a woman having sex with a goat, and a scene in which the young lead gets buried up to his neck so that ravens can peck his face bloody. It also has the most unsettling depiction of cat sex I have ever seen in a movie, which is a phrase I never wanted to use and a scene I can now never un-see.

Visually, The Painted Bird is a stunner. Shot on 35 mm, Vladimír Smutný’s black-and-white cinematography is genuinely gorgeous, even when depicting the most horrifically disgusting of acts. The entire point of the film really seems to be to test whether it’s possible to depict the ugliest things imaginable in an aesthetically beautiful way. By a few minutes in, the answer is clearly yes, but the film then continues on for nearly three more hours anyway, and after that initial revelation it really doesn’t bring more to the table to justify sitting through its parade of horrors.

The Painted Bird is the cinematic equivalent of endurance running, only without any of the benefits of physical exercise. It makes an ideal double feature pairing with Son of Saul for people who like arthouse films and never want to be happy again.

The Painted Bird premieres in theaters and on VOD July 17.