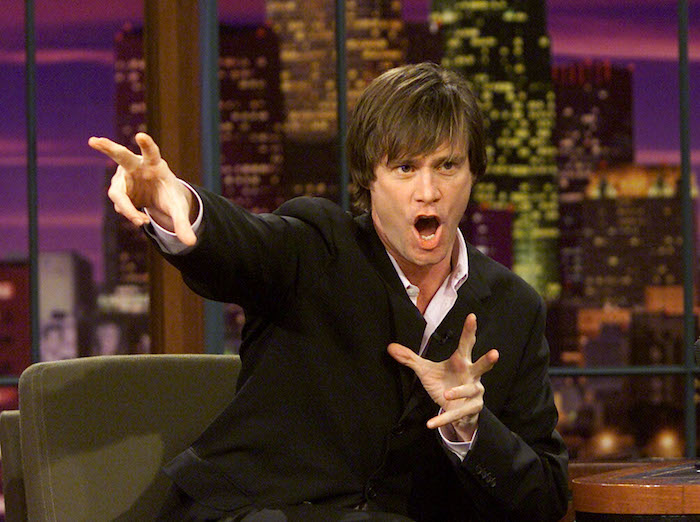 I listened to Jim Carrey on WTF with Marc Maron, and I cannot get over how insufferable he is these days. I know none of this is particularly new, but I’ve mostly only been aware of New Age Jim Carrey in magazine articles that I can skim, or maybe the occasional spot on late-night TV, which are short enough to be palatable.

But an hour with Maron? Oooof. Carrey in doses more than 3 minutes is impossible. “The transcendence of [social media], at moments,” Carrey says during one of his bouts of gibberish, “… I don’t purport to be able to transcend this stuff, and I don’t believe anyone who does say that. I’m just an enlightened being and I never feel anything but this enlightenment. I get glimpses, and I am free when the grasping stops.”

“It’s a bigger You,” he says at another point. “It’s not a relative you. It’s not a you that relates to other yous. Freedom comes in there being only one you, and it includes the table and the computer and the ocean and the trees. Try to breathe without them. You can’t. You are the space where all of this happens.”

I have no idea what Carrey means by any of this, but listening to Carrey these days is like listening to Marianne Williamson doing beat poetry for an hour. It’s exhausting. Carrey’s “enlightenment” sounds like just another form of narcissism. “I was at a studio painting one time, and I took a walk, and I found this wonderful little park, and I saw these guys playing soccer, and I felt so free from the painting, because it involves your heart, your head and your hands. It takes everything … and I watched these guys playing soccer. I watched this guy chasing the ball, and I went, ‘That’s it!’ I was compelled by that guy who was so involved in getting the ball. That’s why all sports works, and all art works on the same level. That is presence. Presence is addictive! … and that’s why we watch babies.”

“I honestly believe we are in the midst of a convulsive historic moment in so many ways at once that it’s just mind boggling,” Jim Carrey said, describing the state of the world. “I honestly believe it is the crowning of a new age. It’s a birth. It’s a painful labor. And I think it’s going to be a great new world.”

God bless Marc Maron, an admitted narcissist himself, who not only had to suffer listening to Carrey for an hour, but had to try and steer Carrey away from his woo woo and toward more substantive topics. He occasionally succeeded in getting Carrey to speak coherently, including a section in which Carrey discussed coming up at the Comedy Store in the early 1980s with, of all people, Sam Kinison.

For those unfamiliar with Kinison, he died in a car accident in 1992, but he was a hugely popular stand-up comedian in the late ’80s, one of those guys like Andrew Dice Clay who was very specific to the era. If he were alive today, I have no doubt that Kinison would be a full-throated MAGA, probably hanging out with Roseanne.

Kinison was a Pentecostal preacher turned comic, and his act was like that of an angry, preacher railing about the world, but mostly about women. I’ve written about this before, but the music video from Sam Kinison and Jessica Hahn, the woman with whom evangelist Jim Bakker had an affair, writhing around in a cage while the most popular rock musicians of the day watched from above, is basically 1988 in a nutshell. Anyone who ever feels bad about all those rock stars whose careers were derailed by Kurt Cobain and Nirvana need only watch this video to feel better about their decline.


Point being: I found it amusingly incongruous that Kinison and Carrey came up together, and were close enough friends, it appears, that they even contemplated going on tour together.

The first time Carrey saw him, Kinison had asked Carrey to wait up and watch his 1:45 a.m. set at the Comedy Store, where Kinison doubled as the doorman. “I hung out that night, and I watched him,” Carrey told Maron. “And it makes me cry to think about it. I sat at the back of the room, and I watched the world change. I was crying with laughter … I felt like I was watching Bird, that I was watching Charlie Parker.”

But Carrey also spoke of a persona that Kinison created that he couldn’t get out of. “Every time he got sober, people came up and screamed in his face. They needed him to be the beast.” The two had planned a tour where Kinison would preach, and Carrey would play his sidekick, Lightning Boy Jim.

The two, however, had a falling out, because Kinison got carried away and “frozen in the image of himself.” He became a “rock star,” and it was a “tough ego thing. I don’t think he was able to handle it.” The two of them “split,” because Kinison was going down the direction of “the outlaw,” and while Carrey couldn’t hang with him. Carrey “had a rebellious streak, but I’m not an outlaw. And we had a sit down that didn’t turn out well. He asked me to come out on the road with him, and I said I couldn’t. I’m clinging to this thing called life.”

Kinison would not for that much longer, although ironically, he sober when a drunk-driver struck his car, killing Kinison in 1992.