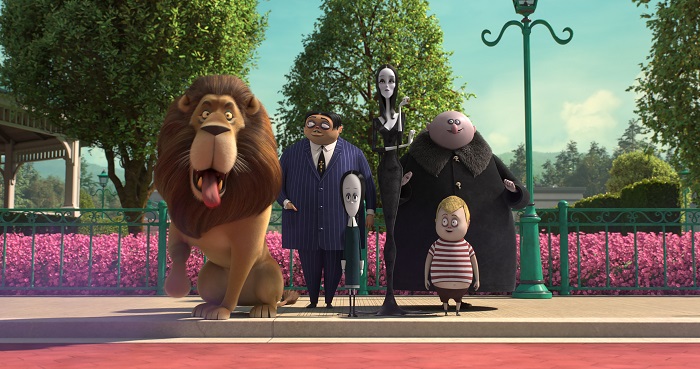 Review: ‘The Addams Family’ Looks Hideous and is Narratively Repetitive, But Reinforces the Idea That Normalcy is Overrated

At this point in the tenure of the Addams Family as a concept, I’m not sure what other original situations can be cooked up for Gomez, Morticia, Wednesday, and Pugsley. Since their introduction by cartoonist Charles Addams in The New Yorker, through their various live-action and animated series, and to the ’90s films (including the classic Addams Family Values), they’ve kept octopi as pets, tried to set Santa Claus on fire, reclaimed their stolen home, fended off Joan Cusack’s black widow character, and taken a stand against Thanksgiving. That’s already a lot of criticism of “normal” American life!

And so it goes that the latest animated spin on the characters, The Addams Family, feels quite familiar narratively. Suburban America is the problem this time, with its Neighborhood Watch groups, its busybodies, its quaint little shops, its town squares. They’re as foreign to the Addams Family as the Addams Family is to them, but the lessons the film is sharing about judgment and compassion are quite familiar. That’s basically what kids’ movies are these days, right? Teaching young viewers that discriminating against other people is wrong is a well-known missive at this point, and although The Addams Family does that with a bit more spookiness than most other children’s films, this whole endeavor feels primarily like a branding exercise. 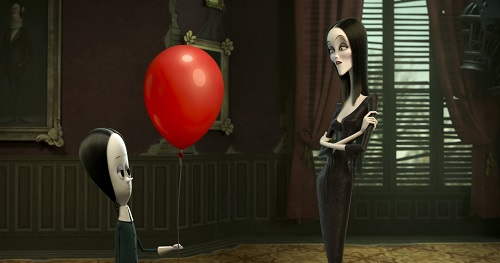 The film begins in the unnamed “old country,” where the wedding ceremony of Gomez (voiced by Oscar Isaac) and Morticia (voiced by Charlize Theron) is interrupted by yelling villagers with torches. “Why do hordes of angry villagers follow us everywhere we go?” they wonder before being carried up a cliff by Gomez’s brother Fester (voiced by Nick Kroll) while their extended family below scatters in various directions. And so, desperate to start their new lives “somewhere no one in their right mind would be caught dead in,” they decide on New Jersey. An abandoned, haunted asylum with bleeding walls (a nod to The Amityville Horror, one of many references to other films, including It, Watchmen, and The Exorcist) and numerous chalk outlines of bodies is the perfect place. Such ambiance!

Thirteen years later, Gomez, Morticia, Thing, and Lurch (voiced by Conrad Vernon), the asylum inmate they gleefully hit with their hearse when they discovered their new home, have been joined by Gomez and Morticia’s children, Wednesday (voiced by Chloë Grace Moretz) and Pugsley (voiced by Finn Wolfhard). They’re loyal siblings, but clear opposites: While Pugsley revels in the strangeness of being an Addams, Wednesday is growing sick of it. She calls their routine “tedious,” and wants to learn what goes on outside the fanged gates of their home; Pugsley, meanwhile, is busy preparing for a traditional swordplay ceremony that Gomez nailed years ago. (The movie tries its best to compare Pugsley’s mazurka test with a bar mitzvah, but weirdly doesn’t address whether elder sister Wednesday underwent anything similar.) 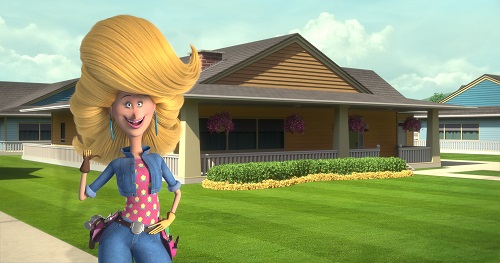 Pugsley is buckling under Gomez’s pressure, while Wednesday is trying Morticia’s patience with her endless questions about why their family is so isolated and why their home is so secluded. And in the suburban town below the Addams’s mansion, another problem is brewing in the form of TV personality and home-renovation expert Margaux (voiced by Allison Janney), who is determined to resort to any means necessary to sell the homes in the community she designed. If all the homes sell, she’ll secure high ratings on her show and remain culturally relevant—but will the weird Addams Family ruin it all?

I think it’s important to be clear about this: This movie looks hideous. There are a lot of clever sight gags here, like Thing searching for pictures of feet online, a swarm of spiders spreading out from under Morticia’s skintight dress, and the fact that Wednesday stays black and white, even when she begins spending time away from her family and with other characters who are presented in a broad color palette. But this movie somehow looks even harsher and less detailed than the similarly conceived Hotel Transylvania series; there’s not much texture here, not much visual complexity. Certain high-energy sequences, like Pugsley’s mazurka, go over well because of the enthusiasm of the subject matter, but I struggle to recall how any of it actually looked because the animation is so bland.

The disappointing nature of the animation itself is a let-down because screenwriters Pamela Pettler (who cut her teeth on Tim Burton’s Corpse Bride and 9) and Matt Lieberman (who also wrote one of Pajiba Overlord Kristy’s holiday favorites, The Christmas Chronicles have a very strong sense of who these characters are. Rebellious Wednesday and extremely pointed Morticia have a pleasantly oppositional dynamic. Isaac brings a good zaniness to Gomez. Little touches like showing Lurch reading Little Women are amusing without being ostentatious. A scene where Wednesday goes all Dr. Frankenstein on a classroom’s worth of about-to-be-dissected frogs is excellently morbid. It would be nice if all of this came with a visually pleasing package and a slightly more unique story, but in those departments, The Addams Family is less kooky and ooky than eh, okay.