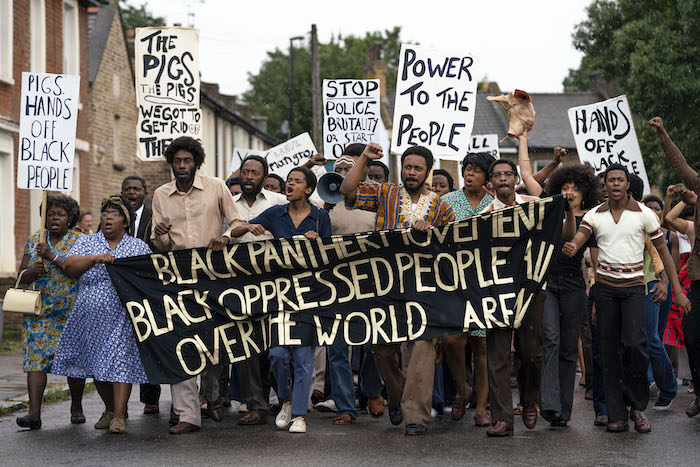 Steve McQueen has never made a bad film. Sure, you can say there are ones you prefer over others, but his streak, starting with Hunger and leading up to, most recently, the underappreciated Widows, is extraordinary. He continues hitting things out of the park with Small Axe, his new Amazon Prime anthology film series, the first part of which, Mangrove, was released last Friday.

Mangrove is a fitting introduction to McQueen’s Small Axe anthology, an ambitiously far-reaching yet intimate work that paints a multifaceted portrait of the experiences of British West Indians in the late 20th century. In its status as a true-life tale of a landmark court case centering activism and right to protest, Mangrove makes a fitting if largely coincidental counterpart to Aaron Sorkin’s The Trial of the Chicago 7, recently released on Netflix.

Set in the Notting Hill area of London in the late 1960s and early 1970s — a diverse but stratified reality a far cry from the version familiar to audiences from the 1999 rom-com of the same name — Small Axe’s first installment takes its title from the Mangrove restaurant run by Frank Crichlow (a compelling Shaun Parkes), a hub and safe haven of sorts for the area’s West Indian population, including a community of Black activists—including British Black Panther leader Altheia Jones-LeCointe. Or at least, The Mangrove is a safe haven until the police, seeing the restaurant’s particular importance to the community, take to subjecting the establishment to destructive raids. After two years of such treatment, Crichlow, Jones-LeCointe, and around 150 other members of the community marched down to the nearest police station in protest, where they are met with hostility by a number of officers, who end up arresting Crichlow and eight others for “inciting a riot.”

In Mangrove, as usual, McQueen’s particular genius lies in his use of time, and ability to explore nuanced concepts through visual storytelling and performance as opposed to relying on expositional or otherwise telling dialogue—perhaps one of the working filmmakers today who best embodies that old adage of “show, don’t tell.” Perhaps there are a few moments in Mangrove that are a bit on the nose, at least by McQueen standards, such as one point when Jones-LeCointe announces they “mustn’t be victims, but protagonists of our own story,” which feels like a bit of a thesis statement for not just Mangrove and Small Axe but something of a through-line for all of McQueen’s films to date. Still, the film overall gives tensions the space and time needed to build up on screen, spending the better part of an hour before getting to the march and subsequent arrests.

Small Axe marks McQueen’s first feature without repeat collaborator Sean Bobbitt as the cinematographer, with Shabier Kirchner (Skate Kitchen, Bull) taking on that key role in a rather seamless transition. A stationary long-take right before the central protest of Mangrove begins in which activist Darcus Howe (Malachi Kirby) finally convinces Crichlow to “take it to the streets” with a demonstration instead of continuing his attempts to play nice within the system presents a rather fascinating counterpart to how McQueen builds to Bobby Sands’ hunger strike in Hunger, which is prefaced by a similarly still long-take in which a priest attempts to talk Sands out of his plan. Both scenes are key emotional beats that allow the cast to shine and speak to McQueen’s ability to create a body of work that builds on itself with a compelling consistency that never feels stale or repetitive.

While visual storytelling is where McQueen really excels, everything else here works, too, from the screenplay co-authored by Alastair Siddons, to Mica Levi’s score, which does an excellent job at contributing to the atmosphere without distracting from the action. In every aspect, Mangrove is a prime example of Small Axe’s many strengths, and a sense of what to expect from the exciting installments still to come.