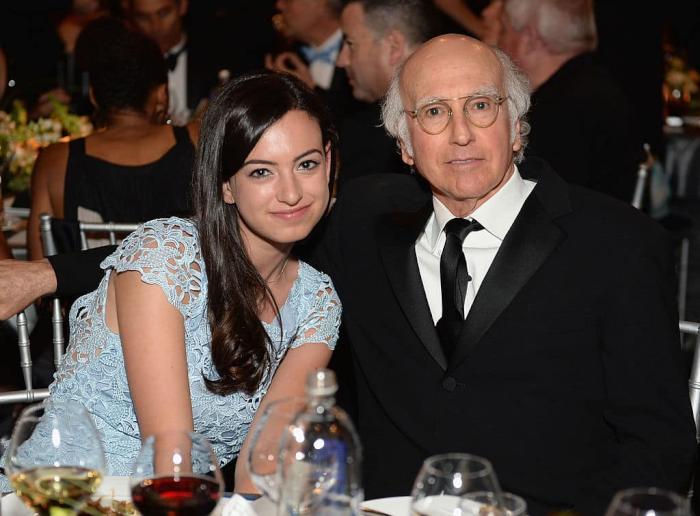 Over the past couple of weeks, it feels like the name Cazzie David has become utterly inescapable. The daughter of Larry David has just released a collection of essays, titled No One Asked For This, and her publisher is determined to make sure that you’re aware of that fact. It’s rare to see any book not written by a multi-million seller get such a ceaseless splurge of promotion and near-unheard of for a non-fiction book written by a debut writer with little to no name recognition with the general public. That hasn’t stopped the team at Mariner Books, a division of Houghton Mifflin Harcourt, from pulling out all the stops.

David’s book has cover quotes from the likes of Diablo Cody. Excerpts have been published in The Cut and David has done interviews and features everywhere, from Vogue to Barstool Sports to the Los Angeles Times. Her online book tour includes A-List interviewers like Amy Schumer, Chrissy Teigen, and, of course, her dad. Her publisher sees this as the launch of a hot new urgent voice for the X-enniall generation. As Graydon Carter, former Vanity Fair editor and the man who hired David to write for the magazine when she was 19, ‘We saw Cazzie as a Nora [Ephron] for a new generation.’ David currently writes for Carter’s new weekly newsletter, Air Mail.

It’s the kind of wall-to-wall coverage that most writers would slice off a thumb for, a vote of encouragement from a struggling industry in the midst of a pandemic that has seen many booksellers struggle with dwindling sales. Reviews, however, are much thinner on the ground. Goodreads gives the book an average rating of 3.29 stars out of five based on 51 ratings and 13 reviews. Of those reviews — which I’m determining by whether the user seems to have actually read the book — four out of seven were one-star slams.

Things aren’t much better on social media. Search for ‘Cazzie David’ and in-between all the promotional stuff, you’ll find endless tweets mocking her, deriding her for succeeding via nepotism, and calling out what they see as a distinct lack of talent. I haven’t read No One Asked For This (it wasn’t available on e-book in the UK and my local bookshops did not have it), but if the job of marketing was to make David’s book wholly enticing to easy sell book nerds like me, they failed miserably. The excerpts published on places like The Cut inspired mockery, with one supposedly satirical piece on her love affair with lockdown quarantine being dismissed as entitled. In my opinion, the work offered to potential readers such as myself was sorely lacking in humor, insight, and all the David Sedaris-esque wit and misanthropy that the cover quotes promised. Mostly, they felt wildly out of date, the kinds of emotional-vomit personal essays that polluted the internet in the heydays of xoJane and Thought Catalog. Such essays never died off as some claimed, but at a time when we’re all riddled with anxiety and turning to art for solace and answers, it seemed disingenuous to say the least to read of Cazzie David’s recycled gags about having sex on a full stomach.

Promoting mediocrity is nothing new, nor is it so agonizingly difficult that marketing divisions struggle with it. If they did, we wouldn’t have gotten five Michael Bay Transformers movies or several long-running Chuck Lorre network sitcoms. True hype is always organic and there’s only so much you can polish a turd, but publicity works for a reason. We’re enticed by big promises and too-good-to-be-true messages. A problem emerges, however, when they’re called upon to sell something that is uniformly and justifiably hated: nepotism. It’s tough to push relatability, as Mariner Books are doing with Cazzie David, when your client is Hollywood offspring who brags about getting a job on her dad’s show then being sad because you think everyone’s judging you for only being hired because you’re the boss’s daughter.

David’s strategy seems to be a kind of self-awareness and ownership of her nepotism, as if admitting that you benefit from this unfair skewing of power will put the topic to rest in people’s imaginations. If she roasts herself enough for her anxiety over being that guy’s daughter, then it will balance out all the skepticism pointed in her direction. It’s certainly a bold strategy, but it doesn’t seem to be paying off. The questionable quality of her book does not alleviate that scorn.

This sort of celeb-drenched anxiety can work, and it can often be very funny. Just ask… well, Larry David. Plenty of Hollywood offspring spun their easy elevation to fame into something more substantive, whether it’s Sofia Coppola becoming a celebrated director separate from her own father or Billie Lourd embracing her comedic chops in a way that would have made her mother and grandmother proud. We have the patience for such figures when they back up the hype. While Cazzie David clearly has friends and supporters in high places, there’s only so much that the well-oiled machine of her publicity campaign can pull off.

What those PR games have been successful at is ensuring wall-to-wall coverage that can quickly distract skeptics from the minor failures. Oh, that weird essay in The Cut about being too full for sex was suspect and full of strange assumptions about gender? No worries, here’s another essay on loving quarantine in another publication. Not into that? Come listen to David be interviewed by Chrissy Teigen! Sick of hearing her in podcasts? Check out this appearance on a late-night talk show. That quantity of attention given to David amps up the illusion of her own urgency and importance. It’s a smart strategy, one that would put most A-Listers to shame. Whether it works is another question, because there’s only so much ‘gold’ that David can mine from her derivative point-of-view and limited life experiences.

The thing about this PR game that feels so wearily inevitable is that every aspect of it, negative or otherwise, will be commodified. I swear we’re like three weeks away from a hilarious Cazzie David essay on how she dealt with being ‘canceled’ by all the meanie criticism of her book, followed by the usual spate of think-pieces that we saw in the wake of every word that left Lena Dunham’s mouth. And all for, let’s be honest, something so low-stakes and unnecessary. But hey, that’s showbiz, and David will be fine. She’s got TV deals in the works and it’s not as if the door will ever slam shut in her face.