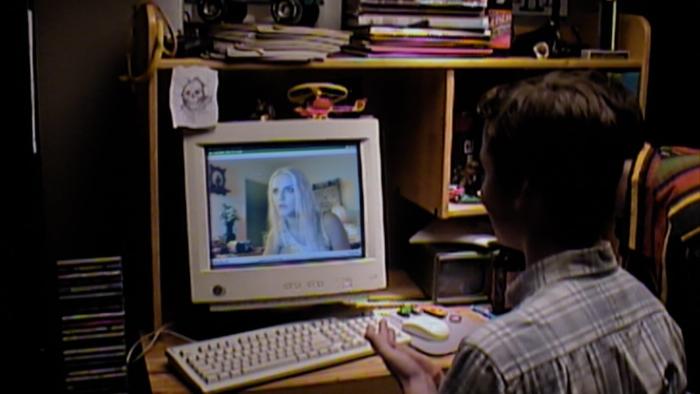 For those unfamiliar, the V/H/S film series boasts a collection of deranged found footage segments, each adhering to specific installment themes. V/H/S/94 showed up about a year ago and was the biggest movie premiere for horror streaming service, Shudder. On the heels of the series dropping us into the mid-90s comes the deranged follow up, V/H/S/99, a pre-Y2K set anthology that explores the age of technology just before it fit in the palm of your hand.

This collection taps into the era of MTV and Nickelodeon when we were all recording ourselves crashing on skateboards and watching each other get coated in slime while braving obstacle courses (ask me about my appearance on a gameshow and how I won that snowboard). It happens in five parts, each with different creators taking on their version of end-of-the-millennium horror stories shot with a handheld.

First, there’s Maggie Levin’s Shredding about some young punks breaking into an abandoned concert venue where a band died in a fire. Beautifully reflecting late-90s punk culture, Levin’s story is crafted around some young brats tormenting their pal with gruesome pranks before getting wrecked by their deceased would-be cohorts. The idea of this one is a blast-from-the-past for anyone who learned words like “grip tape” and “straight edge” to try and blend amongst the slews of kids who could do an “ollie” and play the guitar. But while the MTV gags are a lot of fun, this segment is a bit nauseating in its use of shaky cam and the bit comes and goes in the wrong amount of time. But the Pussy Riot stand-in faux band does enough to welcome you to the late-90s ethos.

Then there’s Johannes Roberts’s (Resident Evil: Welcome to Raccoon City) Suicide Bid about a college student’s desperate attempt to be accepted into a hot girl sorority. Her initiation involves a brutal prank that has her stuffed into a coffin with a box full of spiders. Roberts’ segment doesn’t come with a monster whose name we’re likely to remember, but its obvious Sam Raimi inspirations make for an intense scream-fest.

Third up is Zoe Cooper and Flying Lotus’s Ozzy’s Dungeon about a dangerous children’s gameshow that promises to grant wishes to any brave kid’s who survive a hellish obstacle course. Flying Lotus manages to mash together the vibes of 90s gameshows and late-night gross-out 90s horror cartoons. This one takes a bit too much time to ramp up to its torture section and overstays its welcome once it shows more of its cards. It’s a bit wince-inducing, for better or for worse.

Then the wraparound stop-motion toy soldiers bit turns into Chris Lee Hill and Tyler MacIntyre’s (Tragedy Girls) Gawkers exploring the hazards of boys being boys who have their hands on camcorders, webcams, and basic internet aptitude. These young sickos have a bit too much time to mess with the hot girl next door, but the guys who brought us a story about murderous high school girls and the one about three women sewn into one taking down their captor (Patchwork), were certainly not going to let them get away with it.

The finale, To Hell and Back, comes from Vanessa Winter and Joseph Winter who also gave us this year’s Deadstream. This is most certainly a “best for last” situation that traces two guys getting sucked into the fiery afterlife during a satanic ritual gone wrong. It’s version of hell is so nightmarish and ridiculous and beautifully bolsters the horror and comedy of this segment. Mabel (Melanie Stone) is this year’s Raatma, and I would absolutely climb back from hell to write her name in the witch’s book if she asked me to.

Anthology features are up against the dreaded imbalance that comes from some segments being more appealing than others. This installment excels by being more consistent than its predecessors, no bit standing out as the one that put you to sleep. With the knowledge that the feature is made of a certain number of shorts, it’s easy to find yourself painfully aware of that and to catch yourself mindlessly tracking the runtime. To battle that, segment anthologies need to play with balance and timing, and here, the balance of the stories grasps onto engagement. While everyone’s mileage will vary, the last two segments were the most appealing of the five which meant they arrive just in time to shake you awake. Each piece was a horrific reminder of the cringe nonsense we felt compelled to immortalize via budding electronics and plays to all the panic of the world-ending pivot to using four digits to denote the year.

By splashing horror shorts with VHS static and shaky handheld cameras, V/H/S/99 has successfully added another installment to this series. Each short exploits the setting to delicious effect and is overflowing with splattering frenzy and muddy rainwater. Not ever minute is a winner, but it has enough to justify its length, all culminating in the final segment which most perfectly grasps Y2K fear, horror, and comedy. Hail Mabel.