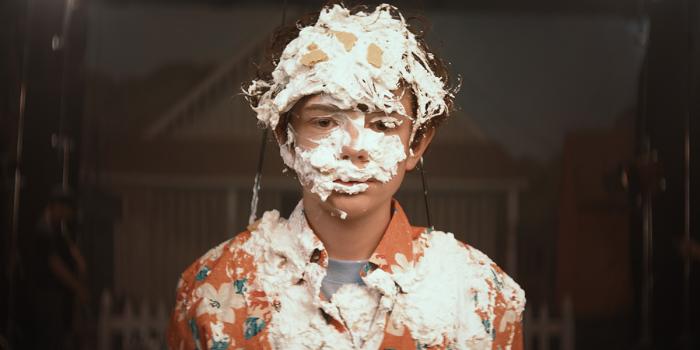 There’s a raw bravery to Honey Boy, a showbiz drama written and co-starring Shia LaBeouf. In it, the actor famous for striking onscreen performance and infamous for shocking offscreen behavior exposes the wounds of his childhood, where outside of the spotlight he was regularly abused by his alcoholic stage-dad. The cynical might suspect the film is a ghoulish attempt to repair LaBeouf’s soiled reputation, like an apology tour or Barbara Walters interview that begs sympathy through exposing tragedy. But instead, the film plays as therapy made public, as it explores the actor’s quest to understand and forgive his father for his faults. The result is a movie that’s messy but moving.

Honey Boy centers on Otis Lort, a Shia analog who goes from chipper child star to 20-something bad boy. The film swings back and forth from 2005, when 22-year-old Otis (Lucas Hedges) is forced into rehab, and 1995, when 12-year-old Otis (Noah Jupe) was a TV actor living in a sketchy apartment with his bitter, bullying father. In rehab, Otis is encouraged to address his anger, drinking, and self-destructive drive, and look back at where it came from. While Otis struggles to reveal himself to his fellow addicts or the patient counselor who urges him to scream in the woods (Martin Starr in a brief but shining role), the flashbacks let the audience into the experiences that shaped and scarred this young man. And in these flashbacks, Otis’s dad is played by LaBeouf himself.

In therapy, you might be encouraged to consider how another person viewed a situation. You might be asked to empathize as a means of escaping the trap of your own perspective’s distortions. This is what LaBeouf does through the script of Honey Boy and the performance of James Lort. With a wrinkled Southern accent, a scraggly redneck hair cut, and a jangly physicality both manic and menacing, LaBeouf creates a father figure both mesmerizing and unnerving. There’s a festered charm in this man, who can confidently hit on ingenues or bellows at the dirtbag messing with his laundry. On top of this, there’s an ever-bubbling tension between father and son, as James—a former rodeo clown—resents Otis’s success. Threatened by the boy’s talent and bright future, James undercuts the child at every turn, criticizing his process, insulting his mother, and even making fun of the size of his penis. But rather than painting this as simply monstrous, LaBeouf—through script and performance—reveals this horrid behavior as being about James desire to keep his son close. In the twisted way of abusive relationships, he tears the boy down so that Otis believes he needs James to thrive. It’s a eureka moment of therapy rendered into a tender drama.

This is LaBeouf’s movie, yet it belongs to his onscreen doppelgangers. Hedges, who has won acclaim for Manchester By The Sea and Lady Bird, is electric with rage as a young man with a deep well of pain. In a montage that alludes to Shia’s offscreen scandals, he is stumbling drunk in Western wear (Lawless), a steamy force in a bathtub love scene, and a caterwauling buffoon being arrested while pulling the “do you know who I am” schtick. In therapy sessions, Otis defends his dad’s behavior, declaring, “My dad’s not the reason I drink, he’s the reason I work.” There’s a jagged edge to every word that bursts from Hedge’s lips, as if he’s spitting caltrops. And with it, there’s a familiar cadence, which gently mimics LaBeouf’s sparking signature pattern. But this is not an imitation, it’s a precise portrait of rage ensnarled with a bitter love. Still, young Noah Jupe outshines it.

With an impish smile, a flop of dark curls, and bright eyes, Jupe (A Quiet Place) looks every inch the Disney kid LaBeouf once was. And when he’s rigged for silly stunts, hit with cream pies, or tasked with capering for a broad made-for-TV movie, Jupe delivers that Disney sitcom-style acting, which is broad and hokey. But once he steps off these sets—sometimes with stolen snack food from craft services hidden in his knapsack—he is instantly transformed. His bright smile slumps. His eyes sharpen. His plucky voice twitches to a more guarded tone. Many big scenes in Honey Boy are just La Beouf and Jupe in one seething standoff after another. LeBeouf pulls no punches, throwing a laser-focused intensity at this child actor. And Jupe matches him in every moment with a screen presence so natural that it makes the horrors of this abuse all the more harrowing. But then there’s moments away from James, where young Otis gets to be a boy discovering the wonders of even this squalid world of these busted down apartments (think The Florida Project). Enter FKA Twigs as a teen sex worker who befriends little Otis over cigarettes and a need for affection unburdened by resentment or transaction. (Don’t worry. The child and the teen won’t sleep together. This is not Mid90s.)

Yet the best moment for Jupe and the film as a whole is one where he plays telephone in the cruelest circumstance possible. It’s a phone call from Otis’s mom (offscreen Natasha Lyonne), who does not live with father-and-son but keeps tabs as best she can. James refuses to speak to her. And through the receiver, we can hear her begging to be heard. To help her, Otis repeats what’s she’s saying, her wrathful accusations of neglect and betrayal. But he doesn’t just repeat, he performs. His voice grows nasal, his tone hardens. And then, when James spins on heel and barks back at them, Otis shifts once more, taking on his father’s Southern twang and funneling his fury back into the receiver. In this one scene, LaBeouf the screenwriter and Jupe the child star distill what LaBeouf’s childhood felt like. He was forced to be so much more than a kid, or even an actor. He was forced into very adult scenarios by the parents who should have protected him. He was forced to perform not only on camera, but also in his life, hiding the abuse of his father, and playing the go-between to ruthlessly furious parents. Jupe makes all of this soul-rattlingly clear in a scene that’s a few minutes long, but haunting long beyond.

Honey Boy’s intentions are noble, and its performances stellar. The latter is all the more impressive as the film is documentarian Alma Har’el’s narrative directorial debut. Har’el brings an elegant empathy to the drama, regarding every character with a humane lens, rather than painting any as evil or irredeemable. Her framing is often tight, almost claustrophobic, putting us so close you feel like you could almost smell the stale cigarettes on Lort boys’ lips. But then in rehab, there’s room, like scenes where grown Otis paces in his therapy sessions, looking like a caged animal. The framing of
Natasha Braier uses space shrewdly, tying us to young Otis as if we might protect him, then giving grown Otis the space he needs to truly grow.

Where the film fumbles is in a final act that feels jarringly abrupt and too clean after so many gnarly emotions and raw nerves have been exposed. I was still reeling from the fights between boy and father, while the grown Otis races into a climax meant to be cathartic, but comes off cheap. As happened in real-life, estranged father and son reunite. And for a sickly sweet cherry on top to this jarringly happy ending, Otis says to his dad with a smile, “I’m going to make a movie about you.” It feels hokey, especially in the face of the film’s remarkable risks. But more than this, it undermines the movie’s message about the difficulty of letting go and forgiving. Forgiveness is not so easy, so open and close as a Hollywood movie. Forgiveness is a process. It’s a choice we make and must keep making. Making a movie has not likely fixed all the problems between LaBeouf and his dad. And to suggest it has feels shockingly disingenuous after so much ferocious vulnerability. And to do it in a film that throughout explores the alarming disconnect between Hollywood fictions and Hollywood realities makes this blow hit even harder.

All in all, Honey Boy is boldly humane and deeply heart-wrenching. But it’s hard turn to a pat happy ending feels like a pie in the face.