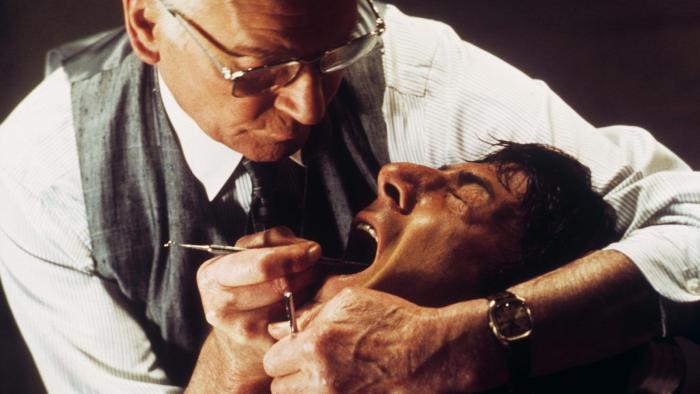 Shitty Things Done In The Name Of Method Acting

Oh method acting. Once an esteemed technique that Hollywood’s biggest stars learned to make their performances dynamic and real, now it’s the phrase evoked every time an actor acts like a jackass in the name of his art.

Perhaps the most famous tale of “Method Acting” comes from the making of 1976’s Marathon Man. In the scene where renowned British thespian Laurence Olivier was to torture up-and-coming leading man Dustin Hoffman, the latter’s character was supposed to be rattled from days without sleep. So, Hoffman decided to try to stay up for three to four days, jacking himself up on caffeine and a trip to Studio 54. When Olivier saw what a wreck Hoffman had made of himself in service to the role, he’s said have replied with shade-throwing glory, “Have you ever tried acting, dear boy? It’s much easier.”

Hoffman claims the story is apocryphal. Regardless, it speaks beautifully to the apparent conflict between being a great method actor and being a really shitty co-worker. Now going “method” might mean Idris Elba sleeping in Nelson Mandela’s jail cell to get a feel for his Mandela: A Long Walk To Freedom role. Or it might mean an actor/actress packing on or losing plenty of weight to transform themselves onscreen. But those methods aren’t hurting anyone.

Here are a few times where some big stars went too far.

Daniel Day-Lewis on My Left Foot

The acclaimed actor is almost as legendary for his eccentric method as for his performances. But most of the time, it’s the kind of quirky that doesn’t impact others, like building a house with 17th-century tools for The Crucible or learning how to butcher for Gangs of New York. But then there was My Left Foot.

Commendably, Day-Lewis spent 8 weeks at a cerebral palsy clinic to fully understand the challenges Irish artist Christy Brown faced day-to-day. But when it came to filming this biopic, the overzealous leading man overstepped his method. Off camera he demanded to be carried around when he wasn’t using a wheelchair, and insisted on being spoon-fed by others, as Brown was.

The actor won an Oscar. No word on what honors those who had to carry and feed him were given.

Jamie Dornan on The Fall

How do you get into the mind of a serial killer? Well, if you’re Belfast-born actor Jamie Dornan you stalk an actual real-live woman! It’s cool, though because it was totally for research and she totally didn’t notice. He assumes. Because it’s awesome to live in a bubble where all that matters is your art and not the very real threat women feel walking home alone. (Thanks, rape culture!)

Trying to show us that the Transformers star was all grown up and a big boy actor now, he decided to go method for playing a moonshiner. Which meant showing up to set drunk. He explained, “My drinking on this movie was as undestructive as I could possibly make it, if that makes sense. I did it for the movie. I didn’t drink off set for no reason. I did it because, when I showed up on set the next day, my fucking eyes looked like this and my face… had that drunk bloat that I needed, that I couldn’t have if that wasn’t going on.”

It was a move that LaBeouf admits unnerved his co-star and onscreen love interest Mia Wasikowska. “She was calling her attorney, like, ‘Get me the hell out of here,” he recounted. “Mia was ready to walk away from the movie. I was really pretty aggressive about it, and not in any kind of weird, strange way, but I don’t think she had ever experienced anything like that.”

When he cut open his face instead of employing effects make-up and reportedly “pulled out his own tooth during the first few weeks of filming and then refused to shower for weeks on end so he could better understand how his character would have felt living in the trenches,” the WWII film’s headliner, Brad Pitt, gave the overzealous ingendude a serious talking to. But when neither Pitt nor director David Ayer could convince LaBeouf that the audience wouldn’t be able to smell his LaB.O., the actor was transferred to another hotel, to provide some relief to his colleagues.

By his own estimate, LaBeouf didn’t bathe for four months.

We’re not trying to pick on the guy, but he’s basically a modern Hoffman with his “acting” antics. In Lars von Trier’s pornographic art house drama, LaBeouf stunned fans when he revealed he’d be having real—as in not faked for the cameras—sex on screen.

While this is something his onscreen partner signed on for, the news is said to have really pissed off his offscreen partner, girlfriend Karolyn Pho. An insider declared, “Karolyn gets that Shia likes to go method and appreciates his artistic integrity. However, she thinks performing a real sex scene in a movie is going too far. It’s difficult for her to understand why it can’t be simulated - just like in other films.”

Can anyone else see the ghost of Olivier rolling his eyes?

Dustin Hoffman on Kramer vs. Kramer

Sorry, folks. We’re not done with Hoffman. And if you—like me—grew up loving him for movies like Tootsie, Rain Man and Hook, prepare to be heartbroken about what a total dick he was to Meryl Streep. Sure, this movie earned them both Oscars, but the road there was paved with mental cruelty and shattered glass.

At the time they made this battle of the sexes drama, Hoffman was a star with Midnight Cowboy, All the President’s Men and Marathon Man under his belt. Streep was basically an unknown, 27, and going through a traumatic time having just lost her lover, John Cazale, to lung cancer. According to a shocking Vanity Fair article—that I highly recommend you read in full—her grief was a tool Hoffman planned to utilize to make the movie distinctly dramatic. His method included forcing her into method acting. Throughout the shoot, Hoffman would goad the ingenue to employ “emotional recall” by whispering Cazale’s name to her before scenes, including the one where her character is forced to answer the question, “Were you a failure at the one most important relationship in your life?”

But Hoffman didn’t stop at emotional abuse. He also also slapped Streep hard across the face before the cameras rolled, without her consent. And in the wine glass smash scene, he gave her no warning of his plan to basically hurl a glass object past her face. “There were shards of glass in her hair. The camera caught the whole thing.”

One more time for the cheap seats: “Have you ever tried acting, dear boy? It’s much easier.”