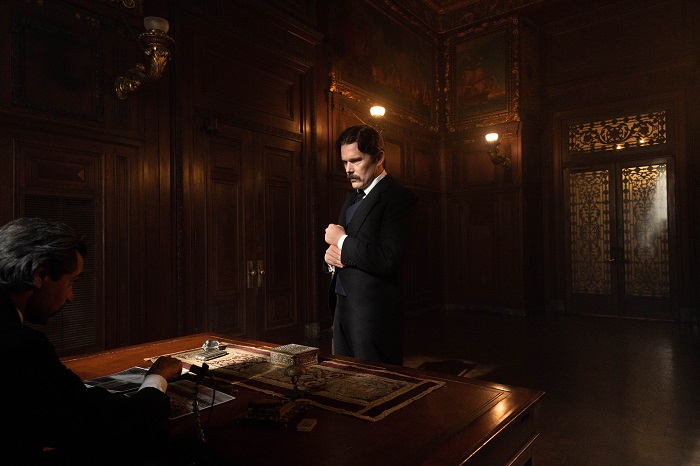 Review: Michael Almereyda’s ‘Tesla’ is Audaciously Strange, But the Experimental Biopic Never Quite Grabs You

More than anything else, Michael Almereyda’s Tesla feels like a mood board, a collage of references and inspirations fastened together as a simultaneous expression of feeling and a menagerie of aspiration. The filmmaker’s approach rebuffs the limits of linear time, collapsing together inventions and technical leaps forward, and rejects some of the popular myths around its titular figure, shading in romantic entanglements for a man many believed to have been asexual and celibate. The result is a movie more about the vibe of Nikola Tesla than a standard recreation of his life, and while that manifests in some admirably wacky, winkingly self-aware moments, the film treats Tesla himself with such distance that the movie never quite grabs you. 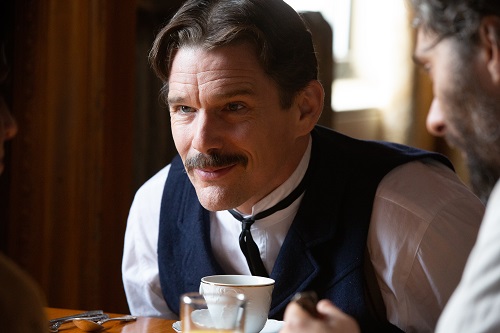 Almereyda and Ethan Hawke, who stars here as Tesla (and follows in a long line of hot Teslas), have history together: Remember the version of Hamlet in which he strolled through a Blockbuster Video while delivering a soliloquy? A movie I stan for very hard? The two of them have a shared interest in rejecting typical cinematic form, and they do it again in Tesla. From the very beginning, this portrait of Tesla plays with what we expect to see in a movie like this. There is a blueprint to this kind of biopic, and Almereyda essentially sets it ablaze, swipes the ashes aside, and sketches something new. So we meet Tesla, who is soft-spoken and polite, but also reticent and blunt, while unsteadily roller-skating around a party. When our narrator, Anne Morgan (Eve Hewson), the daughter of banking behemoth J. P. Morgan (Donnie Keshawarz), introduces him to us, she speaks not of his inventions or his legacy, but of the black cat he had when he was a boy. “Is nature a gigantic cat, and if so, who strokes its back?” Anne tells us Tesla wondered, and that sort of game-of-telephone communication style is used throughout the entire film. There is so little known about Tesla’s interior life, so much that is perceived but not factual, and the former is what interests Almereyda—the opacity of it, and the creative freedom that goes along with that. 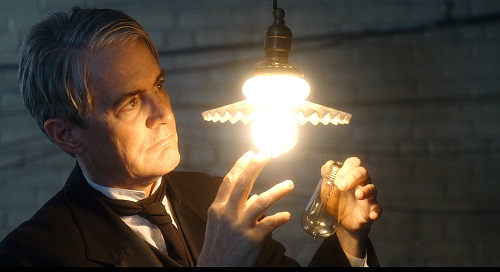 It’s a particular sort of wavelength that sometimes tiptoes toward farce and sometimes veers into politicized hindsight. We see Tesla say something, and then the scene rewinds or shifts to a different perspective, and we get another take, opening our eyes to a viewpoint not yet considered. In his boarding room in the 1880s, Tesla quotes the song “Pity the Poor Immigrant,” which would gain notoriety decades later when recorded by Bob Dylan. He imagines a man, clad all in black, perched on his bed like a psychiatrist; when he looks again, the man has disappeared. During an argument with Thomas Edison (Kyle MacLachlan, smarming it up and eating a slice of pie to please all the Twin Peaks diehards) over whether direct current or alternating current is the future of electricity, the two men aggressively lick ice cream cones before shoving them in each other’s faces; when the scene gets played again, we see it without the dessert, and with noticeably more vitriol between the two.

“This is pretty surely not how it happened,” Anne says, and her interruptions in the narrative force us to reassess our own reactions to these fictional or anachronistic swerves. Does the ice cream make the scene more interesting? Does that goofy detail enhance or detract the animosity we know existed? During a later argument, Edison pulls out his cell phone to scroll through as he ignores Tesla. Anne consults a laptop computer to look up Google Image results for Edison vs. Tesla vs. Tesla’s later benefactor George Westinghouse (Jim Gaffigan), comparing the pictures of the men that come up. How do stories get repeated into fact? Which details matter? Which don’t? And, most importantly, who gets to decide? 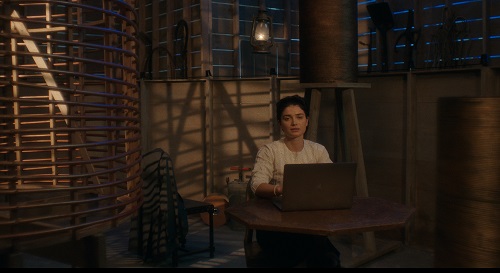 Tesla continues along this vein, with a number of other figures entering into the narrative and sometimes interacting with Tesla—various collaborators and assistants; Edison’s wives; Anne’s guardian; William Kemmler (Blake DeLong), the first man executed by electric chair, in a gruesome scheme concocted by Edison—as the war of the currents progressed. Each interaction underscores how Tesla was a dreamer, a man who had grand ideas (many of which ended up being developed by others, decades later) but whose presentation of them couldn’t generate enough investment to make them real, and whose quirkier beliefs (like thinking he was communicating with Mars) turned off the wealthy from financing him further. “A man who says he doesn’t care about money can find himself tormented by the lack of it,” Anne says, and she’s often the voice pointing out how Tesla’s ideas, so many of which he envisions as free services, wouldn’t be worth it to the capitalist investors who need to pony up their cash to get them made in the first place. (Clears throat: Please, tell me more about how capitalism breeds innovation, or whatever!)

But Tesla itself feels like it can’t make up its mind about the figure, and while that might be the point—that the film is leaving the decision up to us—it also manifests in curious distance. While watching this biopic, I thought often of another this year that dared to thrive on vibe rather than historical fact: Justin Kurzel’s True History of the Kelly Gang, which explored questions of sexuality and gender performance in its portrait of the Australian outlaw. But that film had a certain urgency and vitality that Tesla often lacks. We never feel as if we’re actually inside Tesla’s head, which, again, seems to be the point. But by staying so resolutely outside of the man’s decision making, or creative process, or relationships with his friends or confidantes, it’s difficult to fully grasp the allure Tesla holds. Anne is fascinated by him, and by extension, perhaps we should be, too, since she’s the obvious audience stand-in. How the film treats Tesla so much like a mystery, though, means that we never quite puncture the veil. The film’s closing moments are bold and bizarre—and I won’t spoil them for you, aside to say the scene is one of the cheekiest things I’ve seen all year—but I’m not sure its gonzo energy is enough to redeem Tesla. “You live in your head,” someone says to Tesla, and his response—“Doesn’t everyone?”—captures both the film’s sense of imagination and its ultimate narrative shortcomings.

Tesla is playing in theaters, is available on video on demand, and is available for digital rental or purchase through Amazon Prime, Vudu, and other services.