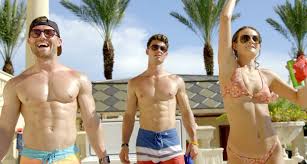 The Night of Florida People

Siesta Key on MTV at 8:00pm ET. Third season finale. The reunion special follows immediately after this last episode, which is a format I’ve never quite understood. Everyone in the reunion show has been away from each other for a while, why not let the audience have some time to contemplate before bringing them all together again?

The Republican National Convention on ABC, CBS, NBC, and a bunch of other places at 10:00pm ET. Tonight’s speakers feature Floridians Jeanette Nunez and Pam Bomdi. I can’t say for sure that they’re worse than the people on Siesta Key, but I can suspect it.

Hot Ones: The Game Show on TruTV at 10:30pm ET. This episode features “Binging with Babish” or, I assume, the host of that YouTube channel which I have occasionally enjoyed. If you’re not familiar with it, the channel gimmick was that he (mostly) makes food and drinks that are based in TV shows or films. A recent one is the “Meat Tornado” from Parks and Rec. Which is alright, but I think I prefer this older video where he tries to make edible versions of the nightmare food from It’s Always Sunny in Philadelphia.