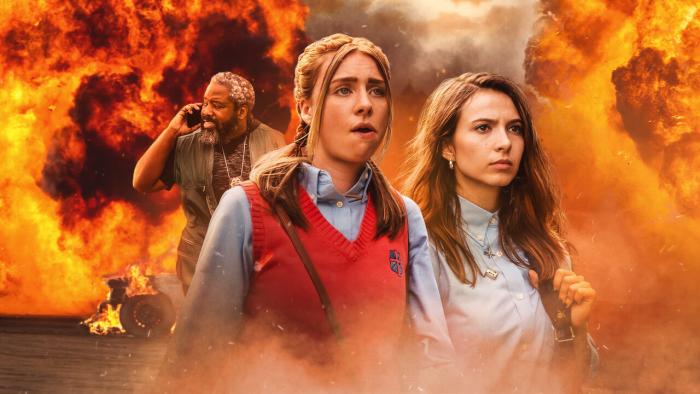 'Teenage Bounty Hunters' Will Surprise The Hell Out Of You

Television today is crowded. The endless sea of shows all vying for our attention can be overwhelming. Generally speaking, it’s rare for something to actually distinguish itself from the rest of the pack. It’s even rarer for a show to successfully subvert our expectations.

Enter Teenage Bounty Hunters on Netflix. When it came up for grabs in Slack, I instantly called dibs and said something along the lines of “I am a trash person and this looks right up my alley.” I mean, the decision had been pretty much made for me after I watched this trailer where Blair (Anjelica Bette Fellini) and Sterling (Maddie Phillips) turn in star-making performances as wisecracking twins with crackling, seamless chemistry.

As we see in the refreshingly well-made trailer, the twins run around playing secret bounty hunter and blowing stuff up with the reluctant help of Bowser (Kardeem Hardison), their world-weary mentor. We also catch glimpses of new friend Yolanda (Shirley Rumierk), teen rival April (Devon Hales), and kept-in-the-dark parents, Debbie and Anderson Wesley (Virginia Williams and Mackenzie Astin). Basically, the plot boils down to: go to church, do weird twin things, hunt down bad guys, make some wisecracks, and then sneak back home to work on geometry.

This beautiful nonsense comes from the incredible minds behind Orange is the New Black and GLOW. Series creator Kathleen Jordan writes and co-executive produces alongside Jenji Kohan, a partnership I can only hope Netflix revisits again. But honestly, even with the talent behind the scenes, I went into this with low-to-middling expectations at best.

I was fully anticipating a decent, funny, snarky splodey splodey boom boom. I figured I could turn my brain off, set my emotions on simmer, and settle in to enjoy something pleasant, self-aware and unthinking.

How very, very wrong I was. It’s good. Like, seriously good. In fact, Teenage Bounty Hunters is genuinely one of the best things I’ve seen all year.

(Spoilers for Teenage Bounty Hounters below.)

Before you start watching, you need to decide if you’re willing to accept some contrived plot devices and out-of-character lapses that set up the rest of the show’s dominos. Because yeah, the whole “teen bounty hunter” premise is basically hand waved into the first episode, and it’s not exactly the most believable of plot devices.

Yet for the most part, even during their most absurd, implausible, over-the-top moments, the show still feels crazy real. Accurate depiction of teens that doesn’t feel like some corporate fat cat trying to be woke? Check. Authentic portrayals of young love and the jagged, tumultuous range of emotions you feel during a breakup? Check. Scenes with two Black men who get into a conflict but resolve it in a way that has nothing to do with toxic masculinity? Check. Diverse cast of characters with different desires, motivations, sexualities and backgrounds? Check and check.

We hear from so many different perspectives, including ones that I didn’t really think I would welcome. The core family is white, affluent, Christian and conservative. The twins go to a religious private school, and are gun owners just like their parents. They pretty much embody all of the questionable hallmarks I was taught to associate with the Bible Belt.

But Teenage Bounty Hunters doesn’t turn the Wesleys into petty stereotypes any more than they do their BIPOC characters. No, across the entire cast, they’re all flawed, compelling, complicated, believable humans. This makes even their minor interactions hit that much closer to home, and it makes the secrets they’re all keeping that much more intriguing.

Speaking of secrets, one of the show’s secret weapons is Blair’s boyfriend, Miles (played wonderfully by Myles Evans). Miles is a good-looking, chill, sweet, funny, smart guy and for sure the Internet’s next boyfriend. When we first meet Miles, we see him parking cars for the ritzy, racist local pool club, and he casually mentions that his mom has two jobs. I have to take a moment to give props to Blair for instantly recognizing how this plays into the power imbalance of their dynamic as a couple. No matter how awkward or misguided her ensuing actions are.

After they’ve just started dating, she naturally freaks when he shows up unexpectedly at her parent’s house. Not because she’s ashamed of him, but because she’s hyper-conscious of her family’s privilege and position so doesn’t want to make him feel uncomfortable. Then at the end of the episode, we find out that his parents are lawyers and members of Congress, and if anything, their house is even bigger than Blair’s. Much like Blair, we’re left wondering if we made assumptions about Miles’s home life because of his comment about his mother’s jobs, or if it was because of his race. I love that the show doesn’t answer this for us but leaves us to sweat, question and think.

I also value Miles because of a quick interaction between him and Blair’s mom, Debbie. The first time he is officially introduced as Blair’s boyfriend, Debbie makes a comment about how delighted she is that her daughter will now be exposed to different peoples and able to absorb “new cultures.” As Blair looks on, horrified, Miles doesn’t miss a beat and pleasantly responds with “oh, yes, it’s such a pleasure to be Black in front of your daughter.”

Not only is this a perfect goosebumps walkway, but I also applaud the show for flawlessly capturing a phenomenon that is not talked about nearly enough: well-meaning racism. I can personally testify that this type of othering doesn’t sting any less for being couched in pleasantry. No matter that in a strange way, it’s intended as a compliment and not an insult. The effect is still the same. The message is still the same. “I, from my surety of voice and position of power, feel qualified to pass judgement on you, deem you worthy or condemn you, based solely on the skin you were born into.”

Over the course of ten episodes, Bowser, Yolanda, Blair and Sterling become a strangely compelling little family. Bowser and my girl Yolanda also deal with some romantic drama, most notably with the handsomely endearing Terrance Coin.

I mean, can we just take a moment to appreciate all of the ways that this shouldn’t work? A love triangle with Method Man, a strong, sassy Latinx woman, and a closed-off, jaded bounty hunter is just … no. That’s not the only adult love triangle, either. The other one involves Bowser, Yolanda and her jealous, scheming sister. Telenovela styles.

Let’s be real — the whole thing sounds like an entire writer’s room got trashed, played Mad Libs, then dug through TV’s basement bin for only the most tired of script beats. But here, too, they manage to breathe new life into even the most overdone storylines.

I could go on and on about the acting, the pacing, the cinematography, the writing — all of which are top-notch. Also, I have to give a special mention to the vitally important moments in the series where a protagonist’s partner calls them out for perpetuating a negligent or harmful dynamic. In each of these moments, it is clearly verbalized that the SO recognizes their own self-worth and is unwilling to accept anything less than what they deserve.

I love, love that we see teens and adults, men and women alike all drawing this line where they point-blank refuse to engage in a toxic relationship, no matter how intriguing or comfortable it is. I cannot emphasize enough how important this message is for all audiences. There is a very important line between “toxic” and “romantic” relationships, and Hollywood blurs that line far too often for my comfort. But not here. Not this revelation of a show.

The cherry on top of the ridiculously good sundae is their ability to wink at their audience. Many of their critical plot twists are based in overdone cliches. It’s all stuff we’ve seen a thousand times before, really. Then Teenage Bounty Hunters comes in, flips you the bird, flips all of tropes on their head, and strolls away smirking, leaving you delightedly reeling.

For all these reasons and so many more, Teenage Bounty Hunters is a breath of fresh air in a stale, crowded playing field. Go ahead and give it a shot, I promise, it will surprise you.

← Your Comprehensive Pajiba Sportsball Roundup For Sportsies And Non-Sportsies Alike | Review: Michael Almereyda's 'Tesla' is Audaciously Strange, But Never Quite Grabs You →