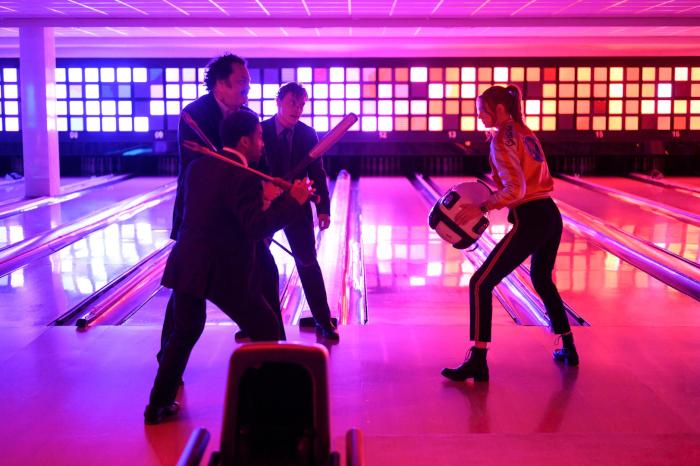 I can’t speak for everyone, but I, myself, spend those few minutes after an action movie practicing my high kicks in the mirror while trying to look cool in a block stance. I might not have a well-placed score or bright pink backlight, but in my post-movie-night headcanon, I look cool as hell. Gunpowder Milkshake, Netflix’s newest feature, will likely inspire lots of us to imagine teeth turning to dust at the whim of our feet. That’s because it kicks mother-fudging ass.

Sam (Karen Gillan) has been on her own since her mother (Lena Headey) ditched her during a diner shootout. The towering redhead was accustomed to delivering weapons to the woman who bore her. She knew no other life when she was left alone with bloody fingers and a milkshake. Now, she’s a solo assassin, hired by the men of The Firm to clean up their messes. But when a job is interrupted by the son of a powerful crime boss, Sam makes a mess of her own.

To regain the favor of her boss, Nathan (Paul Giamatti), Sam takes on a gig to hunt a man who’s stolen from The Firm. But when she meets the poor sap, she discovers he’s stolen the cash to pay ransom for his daughter. Before long, Sam is embroiled in rescuing the young girl, having pissed off multiple sets of crime lords with itchy trigger fingers, none as precise as her own. For the first time in fifteen years, the lone wolf assassin needs support from some old friends.

Sam, the almost untouchable mercenary, slips backward into a bloodbath of her own making. It smells a lot like John Wick mostly in the way it builds the world of an underground society complete with services like safe house diners and gun-dealer libraries. But it’s much more Kingsman: The Secret Service in how it’s a cheeky and bright tale about covert specially trained killers with pop-music scored fight scenes. The key appearances of the slightly aged Michelle Yeoh, Angela Bassett, and Carla Gugino make it feel like The Expendables. So what I’m saying is, Gunspowder Milkshake rocks.

This is the third feature from director, Navot Papushado (who co-wrote with Ehud Lavski). Paired with cinematographer, Michael Seresin (Gravity, Dawn of the Planet of the Apes), he’s created a truly stunning collection of action sequences that are never short on LED lights or blood spatter. The score from Haim Frank Ilfman is reminiscent of Sherlock Holmes, which pushes the movie deeper into being a surreal new take on a tale as old as action-movie-time.

If there’s a trope the women-fronted action movie could have done without, it’s strapping a kid to the hero. Though not a fatal error, the act of having a child change the priorities of a woman lead is tired, and often means dancing around ways to stash the kid away for the bloodier moments. To its credit, while there are instances that Emily (Chloe Coleman) is asked to close her eyes and cover her ears, there are more of Emily assisting Sam in ways that add dynamism to the action scenes.

The action scenes are full of dynamism. Yes, they’re stunning and well-choreographed (the finale is a level of incredible and obscene the likes of us have never witnessed), but they’ve all got something more going on. It’s never just a shootout in a nightclub, each sequence is laced with a twist that makes the choreography more impressive, the acting more unreal, and the whole ordeal way funnier. I rewound to rewatch parts of Sam flinging her numb arms around in ways that put Ace Ventura: When Nature Calls to shame.

It’s not a coincidence that Karen Gillan has shown up in all your favorite franchises (The MCU, Doctor Who, Jumanjis). She’s amazing at what she does, and her combined stature and movement set this movie apart. It’s much less of an ensemble feature than it lets on; more time is spent with Gillan alone, and she carries it. I could watch her kick dudes in the teeth all day and combined with her stoic line delivery and screaming eyes, it makes sense she takes the lead.

There’s a thinly veiled metaphor throughout the flick about gender inequality. Near the top, Sam narrates, “There’s a group of men… they’ve been running things for a long time. And when they need someone to clean up their mess, they call me.” Characters often assume the androgynously named Sam is male, and the climax includes a weird monologue about men feeling uncomfortable surrounded by just women. Though trite to have some feminist themes smeared across a movie just because it stars gals, it’s not distracting and includes a welcome but on-the-nose bit delivered to a young girl about smashing the patriarchy.

Gunpowder Milkshake is everything action movie fans deserve. It’s John Wick for people who want another movie like John Wick and also there are women in it. It has Lena Hadley slow-mo jumping with two guns while shouting, and Angela Bassett smashes a guy’s head through a milkshake. Be there and BYO whipped cream.