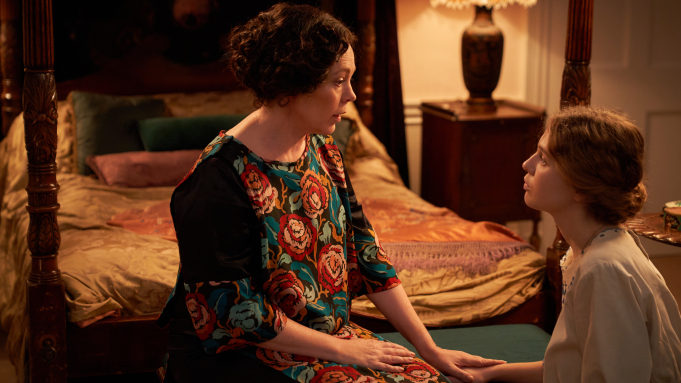 In Eddie Izzard’s stand-up show Dress To Kill,, the comedian identifies a certain sort of English film, which she calls “Room with a View with a Staircase and a Pond”, which feature very good acting, and characters going in and out of rooms saying, “What is it, Sebastian? I’m arranging matches.” That observation comes to mind over and over again throughout the mannered and shiftless period drama Mothering Sunday, as characters endlessly stammer and mutter their buttoned-up post-war British frustration at one another.

Directed by Eva Husson, Mothering Sunday takes place, for the most part, on one momentous summer’s day, when the young, orphaned maid Jane Fairchild (Odessa Young) makes plans to meet her upper-class lover, Paul Sheringham (Josh O’Connor), when his parents and the family that she works for are out for lunch by the river. The rest of the film features Jane recollecting these events as a somewhat older writer, now living with a man called Donald (Ṣọpẹ Dìrísù), and as a much older writer played by Glenda Jackson in a couple of wholly dispensable scenes. The film’s fragmented quality, as it slips from era to era, is evocative of the ways that memory works. But in this listless execution, it also underlines how thin the story is. The framing device is never invested with as much attention or screentime as the events of that one day, which hobbles the film when it switches its focus over to that timeline.

The title Mothering Sunday is a heavily ironic one since the film focuses on a lost generation. Olivia Colman and Colin Firth, playing the Nivens, for whom Jane works, have had their children die in the war; the Sheringhams only have Paul left. This weight is felt in every interaction. Josh O’Connor in particular is adept at conveying the sense of a lost boy, who feels the weight of responsibility, who seeks friendship and intimacy.

Colin Firth mumbles his sadness in the way that you would expect, as a good man who cannot communicate his grief: this stiff formality in the face of heartbreak is indeed sad. Yet it was crying out for a different treatment, for more brazen filmmaking that could cushion this sclerotic behavior more ably.

Olivia Colman, meanwhile, doesn’t have a great deal to go on. Her casting in this minor role is a misstep since we divine that the Oscar-winner will be due a big scene at some point. When it arrives, it comes as a disappointment, because the characters haven’t been imbued by the script with sufficient heart, have not been observed much beyond their beautiful appearances.

Appearances: that word is key, since the upper classes shown here are imprisoned by their need to keep up appearances. The film’s set decoration and costumes (exquisitely, too exquisitely, designed by Sandy Powell) are extremely beautiful and polished, abetting the director, Eva Husson, in showing how these elements of class are a cage, another act of torture for these people. At the same time, the polish of this film, its crushing languorousness, contrive to put them under another sort of glass, from which they are unable to move us as they should. To her credit, Husson attempts to crowbar some sensuality into the mix, adding some commendably casual full-frontal scenes, to give this story the kick up the backside that it needs. And at times, there’s a certain pleasing intimacy to the sex scenes between Paul and Jane. At other times, though, their conversation feels absurd; this is the sort of film, after all, where post-coital lovers gaze out of a window, emit a puff of cigarette smoke, and share a happy-sad memory from childhood that handily reveals the ache at the heart of their being.

Mothering Sunday is a very handsome film, but it is often guilty of overgilding, in its framing and lighting — especially in the way it constantly seizes detail through diaphanous light. After the 758th shot of tumbling locks of hair shot in close-up as they filter the golden gleam of afternoon sunlight, you may find yourself envying those who were carried off in battle.

Mothering Sunday made its world premiere at the 2021 Cannes Film Festival.