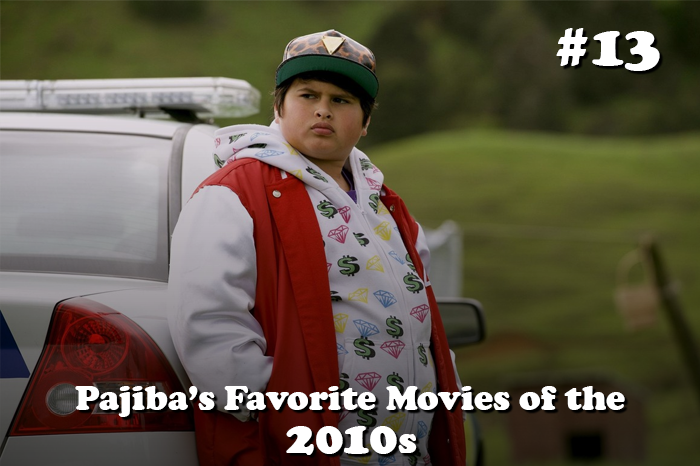 There is a particular joy to be found in a simple story well told, and Hunt for the Wilderpeople is one of the best examples of this phenomenon to grace the silver screen this past decade. The logline — unlikely outlaw duo goes on the run, sending authorities on a wild goose chase — is definitely something you’ve encountered before. The two central characters, in basic outline, are similarly familiar: Ricky Baker (Julian Dennison), a plucky orphan, and Hector “Hec” Faulkner, a gruff woodsman of few words. But through the magic of superb storytelling, impeccable craftsmanship, and writer-director Taika Waititi’s delightful sense of humor, one of the best and most distinctive films of the decade was built on familiar foundations.

Hunt for the Wilderpeople understands the fundamental paradox at the heart of great storytelling: those tales with the most potential to significantly connect with a wide-ranging audience are also more often than not the most specific because it is in this specificity that emotional truth is found. Fiction is, of course, fictional, but if not moored to something real — an emotion, a historical or personal truth, a lived experience — it loses the ability to have any real, lasting impact on its audience. Sure, with sleek craftsmanship alone you can pull together some adrenaline-pumping entertainment that suffices as popcorn-munching fare. That’s why assembly-line style dreck continues to dominate the offerings at your standard multiplex. But such creations are creatures with no teeth. They don’t leave a mark. Hunt for the Wilderpeople has heart. It sticks with you.

Most great adventure stories start with an orphan, and Hunt for the Wilderpeople is no different. After a lifetime being shuffled between group homes and brief stints with foster families, Ricky has low expectations when he is placed with effervescent odd duck Bella (Rima Te Wiata) and her husband Hec at their remote farm at the edge of the gorgeous yet unforgiving wild forests of New Zealand. Bella isn’t so easily deterred by Ricky’s prickly attitude, however, and the boy finds an unexpected sense of belonging with the Faulkners, quirky birthday songs and all. But when Bella dies suddenly, Hec is not considered a viable foster parent on his lonesome, and Ricky is set to be sent back into the clutches of overly intense child welfare worker Paula (Waititi regular Rachel House). Faced with the prospect of juvie, the youngster decides to take his chances and makes a break for the bush. Hec follows, seeking to bring Ricky back, but ends up getting labeled as an accomplice by the press. The authorities, of course, pursue them.

The landscape and culture of New Zealand infuse every frame and shapes every character. Not since the Lord of the Rings trilogy has a film made such striking use of New Zealand’s natural beauty, which is truly, to use the parlance of the film, “majestical.” Lachlan Milne’s cinematography does the work to truly integrate the landscape into the narrative; one particular rotating montage technique Waititi has since used in Jojo Rabbit makes its first appearance here in a sequence of such stunning execution it leaves me in slack-jawed awe every time.

The film’s specific sense of place also brings a unique flavor to its humor. As someone far from an expert on New Zealand, I’m certain there are plenty of jokes and nods to local culture in the film that fly right over my American head, but that knowledge does nothing to subtract from my enjoyment of the film. Much like someone who genuinely thinks “top of the morning” is something Irish people actually say can still enjoy Derry Girls or a white guy with a sense of humor can appreciate A Black Lady Sketch Show, knowing you might not get every joke doesn’t detract from the ability to appreciate the ones you do get. And there’s plenty of great jokes here to appeal to every sense of humor, from a delightful homage to Chaplin’s Gold Rush to arguably the best Lord of the Rings gag to make it to the silver screen to date. Waititi’s humor has a delightfully wicked edge but it never punches down. The film embraces Ricky’s adolescent naivete, but even when it capitalizes on his youthful ignorance — regarding Hec’s description on a wanted poster, for example, Ricky notes, “‘Faulkner is Caucasian’… well, they got that wrong because you’re obviously white” — it never laughs at him. It’s the sort of movie that loves all its characters, from Ricky and Hec to conspiracy-minded hermit Psycho Sam (a delightfully bug-eyed Rhys Darby) and even objectively unlikable figures like bullheaded social worker Paula.

The “misfits-turned-countercultural-icons on the run from the law” plot has been a cinematic staple for a long time, but following the lead of iconic 1960s examples like Bonnie and Clyde and Butch Cassidy and the Sundance Kid, many films in this vein lean heavily on social commentary particular to their moment. To be clear, I am not positioning this quality as a pro or a con, it just simply is, and one of the many clever choices Hunt for the Wilderpeople makes is switching things up by focusing on evergreen themes about belonging. The film’s masterful balance of fresh and familiar results in a viewing experience that feels like a hug from a good friend you haven’t seen in a long time.

People complain that Hollywood, if not the film industry at large, suffers from a lack of new ideas. Regardless of whether or not this is true, a movie like Hunt for the Wilderpeople reminds us that such concerns ultimately miss the point. Sure, having a unique concept is a nice perk, but making a great movie is first and foremost about execution. The oldest ideas can be made new again with some ingenuity and skilled writing; familiar archetypes turned on their heads and made intriguing once more.

The well-paced manhunt makes Hunt for the Wilderpeople’s runtime fly by, but it’s the emotional punch it packs that keeps it lingering in your mind long afterward. It’s like a sample platter of the emotional spectrum with a title card stuck on top and credits stitched on the end; joy, grief, amusement, anger—everything’s there and wrapped up in so much hope that you can’t help but leave the movie feeling emotionally refreshed. The ancient Greeks might have coined the term “catharsis” and its use in drama, but the classical use of the term follows a certain purification-by-fire rationale that sees emotional devastation — e.g., “all our heroes die, life is terrible, the end” — as a prerequisite. Hunt for the Wilderpeople pulls off a much gentler, despair-free form of catharsis that serves as a cleansing pick-me-up instead of a put-down.

There’s so much more I could say about what makes Hunt for the Wilderpeople such a delight, but here’s the thing: the best films have a lightning-in-a-bottle quality to them that makes them utterly impossible to do total justice to in writing. If their brilliance could easily be put into words, it would be similarly straightforward for imitators to replicate, and a quick stroll down movie history lane will provide ample evidence that nothing could be further from the truth.

So instead of rambling on in search of perfect words I’m never going to find, let me just leave you with this: Hunt for the Wilderpeople is an odd-couple buddy outlaw dramedy set in New Zealand that features haikus, wild hogs, and jokes about why leaving a paper suicide note isn’t very effective when faking your death by fire. It’s a casually profound work of humanism about getting lost and finding belonging in the process that’s equally admirable as a work of art and entertainment. It’s got brains, heart, and the courage to be unabashedly weird. The world’s better for its presence, and I’m better for having seen it.