Not to get all Freudian on you, but I personally profoundly believe that guilt is our greatest fear source. Regret and trauma are close friends, and think of that iconic line from Frank Herbert’s Dune: Fear is the mind-killer. The kind of destruction that comes from terror is all-enveloping, and can be irreversible, and if you believe you brought any of that upon yourself—well, to put it bluntly: It fucks with you.

I say all that as a precursor to His House, one of the most engrossing horror films I’ve seen in a long time. Remi Weekes’s film has heavy, unrelenting weight, but it’s also elegantly constructed, visually adventurous, and grounded by a pair of excellent performances from co-leads Ṣọpẹ́ Dìrísù (very good right now in Gangs of London, which you should be watching!) and Wunmi Mosaku (whom you should recognize as Ruby from Lovecraft Country). Most impressive is how Weekes weaves together typical horror elements—jump scares, spooky kids—with the film’s more inward-minded exploration of the damage we carry with us and the transgressions we might never get over. His House manages that tricky combination of things that tangibly go bump in the night and things that creep into your memory, and it’s an attack from all angles.

His House follows married couple Bol (Dìrísù) and Rial (Mosaku), who flee war-torn South Sudan on a series of overfull buses, trucks, and boats, clinging to their belongings, jostling against other frantic people, all desperate to end up somewhere safe. When they finally get to the UK, they’ve suffered immeasurable loss—including their daughter. Rial had made a promise to the young girl—“I’ll protect you”—but they survived the journey, and she didn’t.

In the UK, Bol and Rial worry about whether they’ll be deported—they’ve seen too many of their fellow refugees sent back to die—but instead, it seems like their luck might change. Their interviews go well. Their application for asylum moves forward. They can’t work, and they have to rely on a small government-provided stipend, and they have to stick to a certain schedule of appearances and interviews with their handler Mark (Matt Smith), but they’re given a house in which to live. “No pets, no guests, no friends, no parties,” Mark dictates, and the row house is dirty, and fallen into disrepair, and full of cockroaches, and whoever lived there before was recently evicted, their belongings left out on the small front lawn. But the house is Bol and Rial’s for now, and maybe it’s the beginning of a new life. 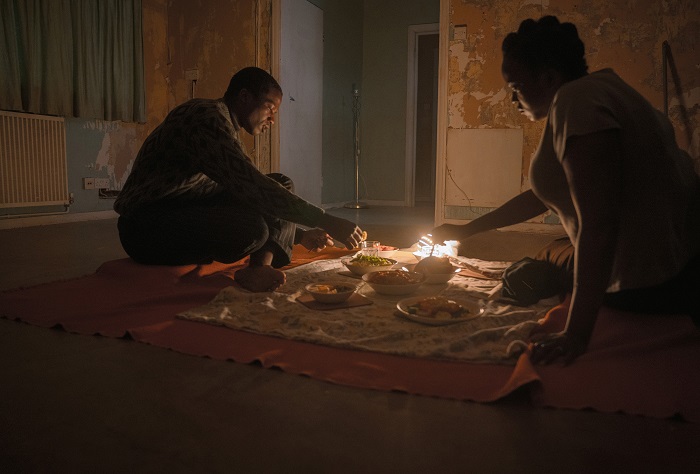 … Maybe. Because something seems to have followed the couple from South Sudan, and its presence begins to drive Bol and Rial apart. Bol hears it humming, thudding, running inside the walls. Are the screams Bol hears real, or memories of their terrible escape? Rial, meanwhile, is still mourning the loss of their daughter, and treasures the doll the girl had carried, and doesn’t understand how fully Bol seems to be abandoning the customs and rituals of their home culture. And as the two of them struggle to adapt to their new surroundings—one of them experiencing acceptance, and the other rejection, by their new neighbors—His House wonders about the impossibility of assimilation, the tumultuous pain of the refugee experience, and the fears we accept because we think we’ve earned them.

Weekes is clever with his script, laying out nuggets of information to paint one portrait of the married couple before adding additional depth and complexity with each new revelation. Are Bol and Rial happy? What does the desire for survival reveal about each of them, and what they mean to each other? And how does the desire for security through homeownership either bring them together, or drive them apart? Those are questions that don’t exist outside of the film’s horror elements, but are woven throughout them. They complement the spookiest scenes—like when Bol dares to reach inside a hole in a wall to try and find his tormentor, or Rial opens a door in their home to reveal a room packed with children, all staring beseechingly at her, or when a slow pan across their living room transforms its floor into a roiling sea, with bodies rising out of the murky water. 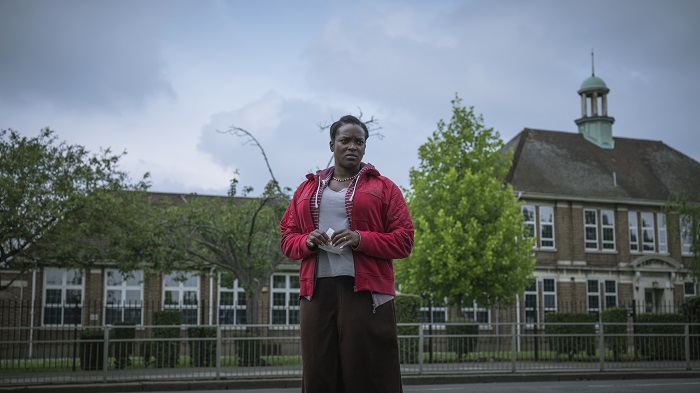 It’s all quite surreal, but Dìrísù and Mosaku ground it with fantastic performances that rely as much on quiet dignity (Mosaku’s silent, searching stare, the way her eyes rip you apart) as maniacal frustration (a laugh Dìrísù delivers during an interview with Mark that is more an expression of agony than any kind of joy). As His House ratchets up in intensity—and man, does it—they remind us of the stakes for Bol and Rial, and for every person who dares for a better life in another place that might not accept them, might not want them, might never feel like home. “Your life is not yours. You stole it,” whispers one of the figures tormenting the pair, and that self-doubt is perhaps the most unsettling aspect of all. His House is top-tier horror: Watch it this Halloween.

His House is streaming on Netflix as of October 30.