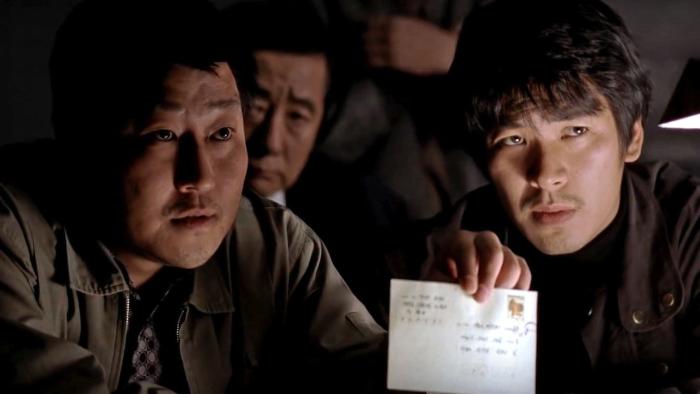 What was your first experience with the films of Bong Joon Ho? Were you among those in the West who became aware of the South Korean filmmaker courtesy of his exhilarating monster movie The Host (2006)? Did you take notice when his chilling crime-drama Mother (2009) scored widespread critical acclaim? Perhaps your first of his films was his star-stuffed English-language debut Snowpiercer (2013), wherein Captain America (Chris Evans) played a brooding cannibal/rebel. Maybe it was instead Okja (2017), the daring Netflix offering about a little girl on a quest to save her beloved GMO pig beast from a cruel corporate queen (Tilda Swinton). Or maybe, you missed all this hype and finally waded into the wonders of Bong’s work with 2019’s Best Picture Oscar-winner Parasite. Wherever you came in, welcome to the fandom, where we relish Bong’s bonkers plot twists, deeply dark sense of humor, and breakneck tonal shifts that jump genres with dizzying aplomb. Now, all of us can enjoy one of his earlier—and previously hard to find—films: Memories of Murder.

Neon acquired the distribution rights to this 2003 crime-thriller, releasing it in theaters in a Fathom Event last week. Now, Memories of Murder is available on digital, which gives fans new and old a chance to see the first collaboration between Bong and recurring leading man Song Kang-ho (The Host, Snowpiercer, Parasite).

Set in a rural South Korean village in 1986, Memories of Murder follows the criminal investigation of a series of brutal rapes and homicides. Song stars as Inspector Park, a local detective who insists he can tell a criminal just by looking them dead in their eyes. However, he and his partner Inspector Cho (Kim Roi-ha) have never seen a case like this before. The cadavers of women are found in ditches, their bodies bound, their faces covered in their undergarments, choked to death by their own stockings. With much hubris, Park and Cho track down a suspect, then play the Good Cop/Bad Cop game they’ve seen in American movies. This means the latter pummels a suspect into a confession. However, the case becomes trickier to close when a hotshot detective from the big city arrives. Inspector Seo (Kim Sang-kyung) is educated, contemplative, and by the book, which ruffles Park on a couple of levels.

Written by Bong and Shim Sung-bo (based on a play by Kim Kwang-rim), Memories of Murder introduces a trio of cop archetypes: The “Good Cop” who follows his instincts (McClane), the “Bad Cop” who’ll pummel a perp without warning (Hopper), and the Cool Detective whose greatest weapon is his intellect (Sherlock). However, if you’re familiar with Bong’s work, you might predict this movie isn’t a case of copaganda.

His Good Cop is a man of swagger, who sincerely wants to solve the case but is frankly a fool. While others are tracking down clues, he’s made a punch line, searching for a killer by staring at crotches. (It makes slightly more sense in context). Bong’s Bad Cop is not a cool rebel, whose violence is the kind of ’80s action heroes, vicious yet validated. He’s a loose-canon who leaps to conclusions and pummels with such little provocation, which ultimately leads to a costly comeuppance. At first, it seems Cool Detective will best them both, overcoming his impulses to look at the cold hard facts alone. The rivalry between the initial team and the new guy lead to them working apart, instead of pooling their skills. Yet Seo’s cerebral methods bring him to the same place as the dudly duo, pushing them all out of their comfort zones, and us too.

The crimes in Memories of Murder are shocking, and Bong does not shy away from their details. There are more dead girls in the movie than there are speaking female characters. That’s not a criticism. This story is about men who want to be heroes to damsels-in-distress. Yet the vanity within their toxic masculinity hinders them in this quest. Notably, it is women (witnesses and a much-mocked female cop) again and again that unearth clues that might lead to the capture of a dangerous killer who stalks the roads on rainy nights. As ever with Bong, a strong socio-political message is baked in, and here it is not only the institutional sexism of the police but also the poisonous impact of the idea of the Hero Cop. To make sure this message hits home, Bong shows us the consequences of failed policing. That means corpses. Their exposed flesh, wounds, and blank eyes are not to be leered at, as is in the case in gory horror, but to harrow us.

Yet, Memories of Murder is funny. As in his other movies, Bong works in bursts of humor that push audiences to cackle. Sometimes it’s done in sharp dialogue, laced with shade. Yet the biggest laughs here are in smash cuts, that deliver a visual joke that is sometimes silly and sometimes downright deranged. Bong provokes the kind of laugh that is a wild bark at the darkness. Then as it echoes, it makes us reflect and maybe throw a hand over our mouth’s in shame. Dare we laugh at something this dark?

All told, Memories of Murder is precisely what you’d expect from Bong. It centers on anti-heroes whose outrageous behavior is matched with undeniable charisma. Here, it’s easy to see why Bong made Song his go-to, as the entrancing actor is able to play arrogance with an infuriating yet hilarious verve and an edge of vulnerability. From there, Bong blends disturbing details with a cutting sense of humor, offering excitement in the irreverence. Then, infused through it all is an ardent message, a warning about the systemic evils of the world. Bong does not make cautionary tales, but satires that urge us to laugh at these evils. Perhaps because if we can recognize their wickedness alongside their ridiculousness, we can topple the fools who built such twisted systems.

Memories of Murder is now on digital.


← A Legend Is Gone. Sean Connery Is Dead At Age 90. | Review: 'His House' is Elegantly Constructed, Deeply Terrifying Horror →