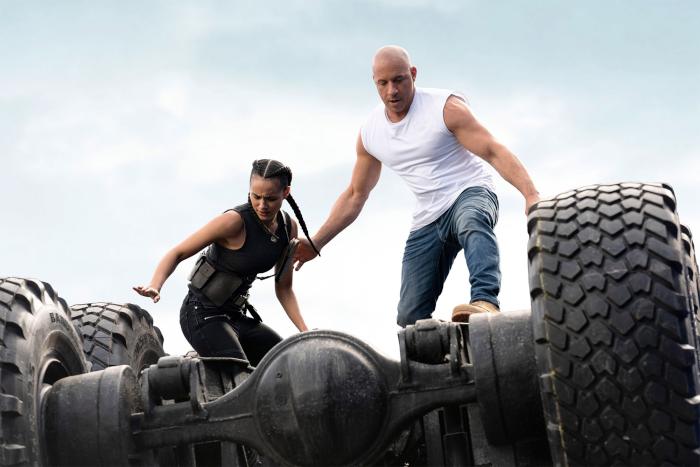 Review: 'F9' Has Entered the Tyson Zone and Nothing Matters Anymore

To quote the great game show hostess Veronica Elder: Does it even matter anymore? Does a review of F9 matter? Does anything matter? God? Politics? String Theory? Anything?

Readers, I saw F9 last night and I’m here to tell you that no. Nothing matters anymore.

Let me take a step back, and please indulge me a couple of semi-obscure pop culture references that might help explain my headspace right now. Years ago, before
he became … whatever he is now … writer Bill Simmons had a weekly column for ESPN, the type of long, entertaining diatribe that was so chunky with content and verbosity that it would give our own Castleton a run for his money. During one of those, a reader posited the following question:

“I think Ron Artest has entered rarified air now. He’s officially a person who, if a friend said, “Did you hear that (fill in celebrity’s name) just (fill in the insane behavior: urinated on a police officer, began breeding unicorns, etc.)?”, I would have no problem believing it was true. I think this space is occupied by Mike Tyson, Michael Jackson, Courtney Love, and the late, great ODB. Can you think of any others?”

Simmons dubbed this “The Tyson Zone,” that level where someone or something has reached a height where you will literally believe anything said about them. Folks, the Fast and Furious franchise has hit the Tyson Zone. After the last couple entries, there’s literally nothing we won’t believe anymore. It’s hard to believe that this monster of a franchise is a) 20 years old now and b) was once just a story about cars going fast, with some minor cops and robbers tropes thrown in. It’s now a completely bonkers mountain of madness that appears to have no peak, just a constant unending climb that director Justin Lin appears more than happy to tackle.

What’s the plot? Does it even matter? John Cena is there, playing Dominic Toretto’s (Vin Diesel) long-lost and extremely estranged brother. Dom has a brother, you say? This man who can’t go three lines of dialogue without growling the word “family” has a brother who has literally NEVER BEEN MENTIONED? Doesn’t matter. That brother is seeking to steal a MacGuffin that - despite being the size of a toddler’s soccer ball - can somehow seize control of the entire world? HOW is such a device possible? Does it matter? No, readers, it does f**king not. What matters is that this ragtag group of car thieves has now evolved into a group that can do absolutely goddamn anything. They can hack satellites. They can drive over rope bridges that are falling down ravines. They are all somehow, magically, expert martial artists. There are no more limits. They are, as I noted when I wrote about the disappointing Hobbs and Shaw, superheroes.

Does this hurt the franchise? Not really. The stakes have been world-ending for a couple of entries now, and the team remains a fun, fast-and-loose collection of goofballs. Lin has made some smart course corrections — Letty (Michelle Rodriguez) and Mia (Jordana Brewster) are no longer relegated to just being “tough chicks” who fight other tough chicks. They hold their own against everyone. Roman (Tyrese Gibson) has an amusing level of self-awareness this time around that I appreciated, making his constant dipshittery more tolerable. Honestly, if anything drags the film down, it’s Diesel himself, whose long, overly serious moments of melodrama have grown tiresome and are taken to extremes this time around. I want my action extreme, not my monologues.

The action is, unsurprisingly, completely bananas. Lin seems to have written down the word “impossible” on a piece of paper and then chewed it up and swallowed it. There are giant magnets. There are zip lines across entire cities. They go to f**king space. All of this combines into a franchise that’s practically — no pun intended — bulletproof. Was it fun? Hell yes it was. Did it drag for the first 45 minutes while they painstakingly hammered the concrete-thick family twists into our heads, complete with gauzily-filmed flashbacks of Dom’s father grumbling about family and lots of jaw-jutting and tears? Yes. Yet once it gets all that nonsense out of the way, it’s still fast and loose and silly. The cast continues to be fun to watch as they clunk their way through nonsense dialogue. Charlize Theron is predictably glorious, as is Helen Mirren. There are a host of weird, WEIRD cameos, some expected, some not. Of course, you all know about the fan-favorite character who returns, and he’s wonderful, and there’s a scene at the very end with him that genuinely choked me up. The whole film is a mess. I can’t wait to see it again.

Some of you will inevitably ask “where do they go from here?” If you’re familiar with comedian Evan Williams, he’s pretty much got it nailed:

In truth? It doesn’t matter. As long as Diesel can get the word “family” out, and Rodriguez can maintain a steely glare and yell “DOM,” and Gibson can crack wise and Chris Bridges can somehow make a guy who once ran a fucking Auto Zone look like Anonymous, and Nathalie Emmanuel can also be Anonymous while looking absolutely goddamn stunning? They can live forever. Because what they do doesn’t matter. We’ll keep coming back.