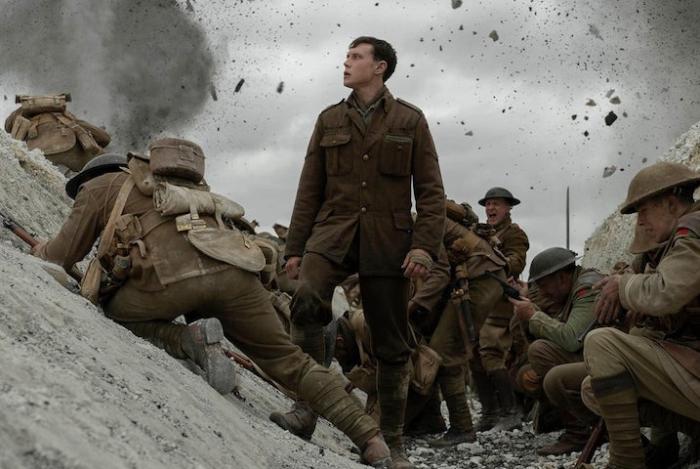 Review: ‘1917’ Shares A Familiar Story Made Fantastic in the Telling

Race against the clock World War I drama 1917 is evidently a personal tale for director Sam Mendes, who has spoken quite a bit about how his grandfather’s war stories inspired the film, but it is cinematographer Roger Deakins’ masterpiece. While personal significance does have value, it doesn’t inherently translate into a film that has any particular significance for anybody else, especially considering the recent centennial-inspired flux in WWI content such as Dunkirk and They Shall Not Grow Old.

The plot of 1917—two soldiers, Lance Corporals Blake (Dean-Charles Chapman) and Schofield (George MacKay, looking to break out in a major way between this and the upcoming True History of the Kelly Gang) sent on an urgent near-suicide mission to deliver a message that could save an entire battalion of men from a needless untimely demise—is sufficiently gripping for its runtime. Several other reviewers have already made comparisons to Christopher Nolan’s Dunkirk, and in terms of story, this comparison is utterly valid; both depict war form the foot soldier’s perspective as a scramble for survival without lofty notions of queen or county, just men trying to do their best to stay alive for another day. As mentioned, it’s a sufficiently compelling narrative and the script, co-authored by Mendes and Krysty Wilson-Cairns, best known for her work on the Showtime series Penny Dreadful, is solid, but it’s also nothing especially new. If you are looking for a story you have never seen before, 1917 is not what you seek.

However, if the prospect of seeing the work of a visual master at the peak of his craft sounds tempting, 1917 is one you should put at the top of your list. When speaking of film “auteurs,” we usually speak of directors, and occasionally writers, but any discussion of the filmmaking greats of our current era would be woefully incomplete without a mention of cinematographer Roger Deakins. Deakins, who finally took home an Oscar for Blade Runner 2049, his 14th nomination, has a way of telling stories in pictures that is truly extraordinary.

Deakins’ talent for finding stunning, memorable shot compositions imbued with narrative significance is without peer, and 1917 puts his impeccable craftsmanship front and center with its “one-take” premise. The unbroken nature of the scenes leaves much of the storytelling power typically bestowed to the editor in the hands of the cinematographer instead. The story of 1917 feels familiar, but the way in which the story is told singularly exhilarating.

Compared to the fast-paced editing of Dunkirk and most other war films, the long takes of 1917 maintain an intriguingly different relationship with their subject matter. The film’s consistent use of wide, deep-focus shots allows viewers to explore the strange and gruesome world of trench warfare beyond the trials of Blake and Schofield if they so choose. There’s the intriguing potential for any two audience members to experience a markedly different film depending on where they choose to look—if they choose to engage in the small stories consistently playing out in the background, and which of those stories catch their eye.

To be clear, the “one-shot” film is not a novel concept. After digital cameras made a true “one-shot” film possible, filmmakers were quick to capitalize on the potential. In 2000, Mike Figgis released the experimental drama Timecode; two years later Alexander Sokurov made Russian Ark, a lyrical one-take journey through Russian history composed of a single Steadicam sequence shot in almost constant motion that deserves substantial credit as 1917’s technical predecessor. While 1917 is slightly less committed to the one-take concept than either of these earlier films, in truth a handful of very long takes carefully cut together, the finished product is no less remarkable for this concession.

So much of the best film craftsmanship functions on an almost subliminal level, but in 1917 crafts are put front and center in a starring role, and the results are extraordinary. In an era where moviegoers have grown accustomed to photorealistic CGI worlds and actors de-aged or even brought back from the dead through computer wizardry, it is the magic of brilliant practical craftsmanship that truly retains the power to wow, the wonder of how did they do that?! Sam Mendes deserves due credit for being captain of the ship, but 1917 plays out, above all, as a testament to the mastery of Roger Deakins, one of the greatest visual storytellers of our time. It’s definitely worth seeing on the big screen.

← The Best and Worst Books of Cannonball Read 11 | Review: 'Just Mercy' is Earnest But Formulaic in Portraying Bryan Stevenson and Walter McMillian →