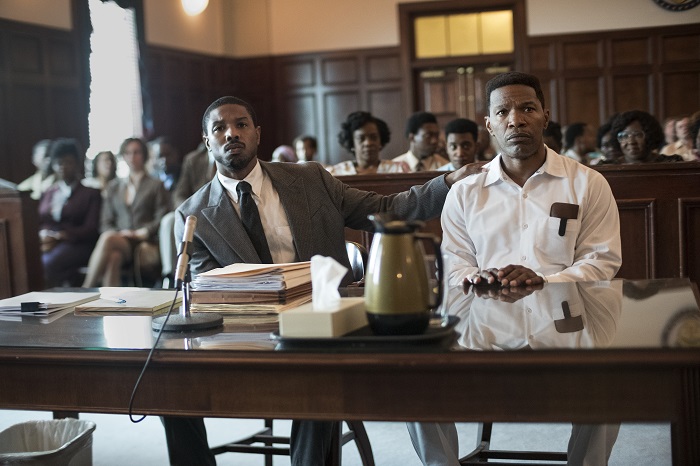 Review: ‘Just Mercy’ is Recognizably Formulaic But Utterly Serious in its Earnestness, Sensitivity, and Sense of Moral Outrage

There is no element of surprise in Destin Daniel Cretton’s Just Mercy, starring Michael B. Jordan as the real-life lawyer and social justice activist Bryan Stevenson. Stevenson is an unarguably good person, and his motivations are just and true. He fights for his clients; he recognizes the racism and persecution purposefully built into the American justice system; he is unwilling to back down. That sureness of moral purity is admirable, but it also makes for a somewhat routine film.

That’s not to say Just Mercy isn’t gut-wrenching—there are moments here of profound emotional power, thanks to the assembled ensemble—but more that the strength of Just Mercy mostly comes from the fact that Stevenson is depicted as a young black man actually accomplishing what we as a society have come to believe that only someone like the fictional To Kill a Mockingbird hero Atticus Finch could do. Just Mercy nods politely at the American myth of the benevolent old Southern white man, lets him know “Nah, we’re good, actually,” and then shows him the door. And although the movie overall handles issues of race and class with less complexity than the also-currently-in-theaters Clemency, if we still have to tell stories that remind white people that racism is bad, actually, at least they’re presented with more grace and effectiveness than Green Book or The Best of Enemies.

Just Mercy adapts Stevenson’s 2015 memoir, Just Mercy: A Story of Justice and Redemption, which was a New York Times bestseller and elaborated on a case of Stevenson’s that was also featured on 60 Minutes. The film begins in 1987, in Monroe County, Alabama, where a man name Walter McMillian (Jamie Foxx) is taking down a tree. The removal of the treetop from the canopy opens up a huge gap in the foliage, making space for the shining sun above, the clouds, the sky, the wind—all which will be denied McMillian for years to come once he’s imprisoned for the murder of a white woman. He swears he didn’t commit the crime, and more than a dozen people testified that he was at a fish fry when the crime occurred, but a jury found him guilty anyway, and sentenced him to death anyway. So it goes as a black man in Alabama. 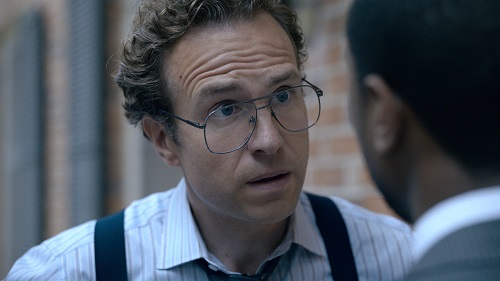 Years later, when Stevenson (Jordan) graduates from Harvard University, he too ends up in Monroeville, Alabama (home of the aforementioned To Kill a Mockingbird), leaving behind his family in Delaware and his concerned parents (“What you’re doing is gonna make a lot of people upset,” his mother warns) to open up a clinic offering legal aid for death-row inmates. Federal funding has made the initiative possible, but Stevenson’s feisty office manager, Eva Ansley (Brie Larson, star of Creston’s prior films The Glass Castle and Short Term 12), has to lie to landlords to secure a lease. Most everyone in town wants them gone, in particular racist district attorney Tom Chapman (Rafe Spall, continuing his spell playing nefarious Americans in Jurassic World: Fallen Kingdom and Men in Black: International), but Bryan is committed. “There’s always something that we can do. Your life is still meaningful,” he tries to assure the inmates, but it’s difficult to gain their trust when death is around the corner.

And especially difficult to form a bond with is Walter, who sees in Bryan a tourist, a black man whose life up north has made him ill-prepared for the rampant racism of the South, for how “you’re guilty from the moment you born.” So it’s an uphill battle for Bryan, but he sticks with it: meeting with Walter’s family to gather evidence, questioning Chapman about the shoddy case, and learning that the state’s witness (Tim Blake Nelson, continuing a great year after his work in Watchmen) might not have been entirely truthful. But does any of this matter in a town where a prison guard delights in forcing Bryan to strip on his first visit to the prison; where people call in death threats to Eva’s home; where police officers, in a lazy, easy drawl, call Bryan “boy”? 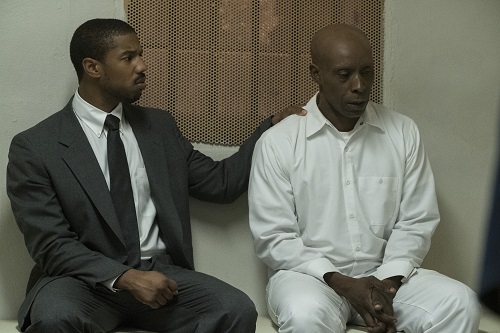 The dehumanizing aspects of Just Mercy are familiar, and the script from Cretton and Andrew Lanham mostly traffics in proclamations that support Stevenson’s moral outrage without digging too deep into how any of this affects him. Still, Jordan conveys much in the tight coil of his body, in how he holds himself ramrod straight and noticeably tense, and that adds some depth to the slogans he delivers as dialogue, like “It’s never too late for justice.” Foxx has a standout moment toward the end of the film where his cynicism finally shatters into hopelessness, but the true MVP of Just Mercy is Rob Morgan, who steals scenes here with as much ease as he did in The Last Black Man in San Francisco and Mudbound.

As the Vietnam War veteran Herbert Richardson, whose untreated PTSD resulted in Herbert planting a bomb that killed someone, Morgan is absolutely staggering, conveying years of guilt and regret in his gaze and in his posture and in his walk. The best portions of Just Mercy are when Morgan’s, Foxx’s, and O’Shea Jackson Jr.’s characters are bantering in their adjoining prison cells, trading scraps of hope back and forth through bars after Bryan enters their lives. In those moments, the movie expands its criticism past just Walter’s story, broadening its questions about how the American government uses people of color for its own imperialist agenda and then abandons them as soon as their function is served. That’s perhaps a pricklier question than a movie like this, which is more focused on the selfless contributions of individuals to combat a selfish system, can handle. But thanks to Cretton’s effective direction and this ensemble’s sensitive performances, Just Mercy quite nearly shakes the formulaic nature of this genre.

← Review: '1917' Shares A Familiar Story Made Fantastic in the Telling | Can We Not Use Ari Behn's Death as an Excuse for Kevin Spacey Murder Conspiracies? →