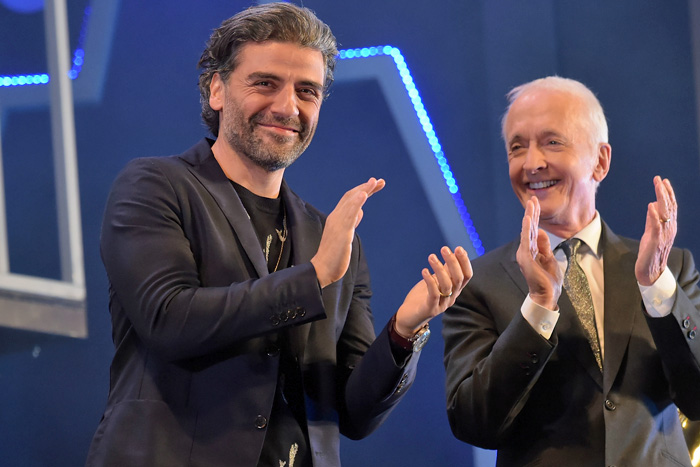 As Star Wars: The Rise of Skywalker prepared to stumble its way into theaters with all the subtlety of Homer Simpson giving The Last Jedi a piece of his mind, one of the best guilty pleasures was watching a completely checked-out Oscar Isaac give zero f*cks and completely sticking it to Disney in interviews. Like so…

“I think there could’ve been a very interesting, forward-thinking - not even forward-thinking, just, like, current-thinking - love story there, something that hadn’t quite been explored yet; particularly the dynamic between these two men in war that could’ve fallen in love with each other,” Isaac told IGN. “I would try to push it a bit in that direction, but the Disney overlords were not ready to do that.”

Even better, once the film hit, Isaac’s disdain became even more palpable when his character Poe Dameron had to deliver the line, “Somehow, Palpatine has returned,” which, I’m not even joking, is the only explanation the movie gives for how the hell the Emperor is back. Although, thankfully, it’s more of an explanation than we’re given for how ol’ Palps managed to nut in somebody. (Just kidding. I still want to know.) More importantly, the lazy-as-shit line became a meme that only further solidified Isaac wanting nothing to do with this goddamn franchise ever again.

“Somehow, Palpatine has returned.” I swear I saw Oscar Isaac’s soul die in that moment.

His mouth was saying "Somehow, Palpatine returned", but his eyes were saying "I did not go to Juilliard for this".

All of that brings us to this latest TMZ video where Isaac is asked if he’ll ever play Poe Dameron again. While I’m always hesitant to post these ambush clips, TMZ is actually on the money when they claim his tone says everything. The way Isaac says “Probably not…” sure sounds a helluva lot like “I ain’t going back to that shit.” (Or if you want to split hairs, it could be him saying there’s no way Disney’s bringing me back after pissing in their faces. Tom-ay-to, tom-ah-to.)

On a side note, if your first reaction is to marvel at how grey Isaac’s hair is, then watch as that amazement quickly turns into an almost unquenchable thirst. Congratulations, Team Pajiba is with you. A whole lot. Frankly, some of us still haven’t recovered.