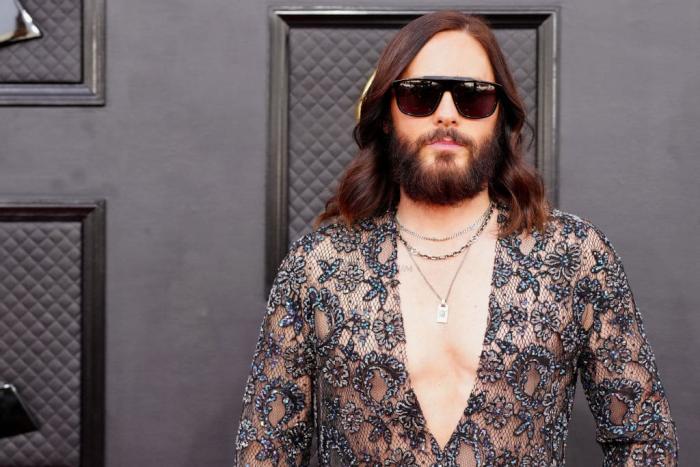 Jared Leto is Many Things, but He is Not a Leading Man: So What is He?

Morbius is the latest Sony film to continue milking the Spider-Man realm of Marvel Comics that falls under their studio ownership but still has a tentative foot tiptoeing into the more beloved MCU. While Spidey has faced a fascinating array of villains over the decades, Sony’s attempt to create an entire franchise centered on them has inspired mixed results and varied levels of fan enthusiasm. Audiences were won over by the manic force of Venom, mostly thanks to Tom Hardy’s actorly choices and a savvy decision to embrace surreal comedy over grimdark drama. Morbius, however, has mostly elicited yawns from critics and viewers alike. It’s not even fun-bad, it’s just dull, a bloodless vampire movie more concerned with setting up an unwanted cinematic universe than telling its own story.

At the center of this is Jared Leto, the Oscar-winning actor with a reputation for, let’s put it mildly, being a tad over-the-top. Reviews have noted that his performance is, shockingly, surprisingly subdued given that he’s playing a man who turns into a ravenous bat-man (but not that batman.) His work hasn’t been slammed in Morbius, per se, but it hasn’t been heralded as a bright spot in a bland film. This has got me wondering about Leto’s work and his status as a leading man. By which I mean there is no status. Jared Leto is not a leading man.

For someone who has been hugely defined by his appearance for so many years now, Leto has never really been a leading man, nor has he tried to take on those plummy or money-making title roles. He’s been a supporting or ensemble player for most of his career, which has been a smart choice in my opinion. He has shone in smaller parts where he’s part of a sturdy actorly ecosystem, such as his turn as one of the smarmy yuppies in American Psycho or as the distant love interest in Girl, Interrupted. Some of his best work plays around with his handsomeness, such as when Edward Norton destroys his pretty face in Fight Club. It always seemed like he was a guy trying to get away from being branded the perennially hot one, something many heartthrobs have tried to escape in their careers (Leo, Brad, Gosling, etc.) So, instead, Leto decided to get serious in the most conventional and tiring manner possible.

Leto has a bag of tricks he has always returned to, especially when he’s eager to prove his prestigious clout as an artiste. He loves to gain weight, lose weight, pad himself out, slather prosthetics over his pretty face, and engage in Muppet-esque accent dramatics. He infamously gained 67 pounds to play Mark David Chapman in Chapter 27, a critically derided film where his performance was mocked as a display of pure pretension. He starved himself for Requiem for a Dream, which is admittedly a far better film, dropping 28 pounds and living on the streets to prepare for playing a heroin addict. He won his Oscar for playing a trans woman in Dallas Buyers Club and practically all of the hype around that performance was about his intensive prep and method nonsense, like when he lost 30 pounds and refused to break character during filming. The director even stated, ‘I don’t know Leto. Jared never showed me Jared.’ It worked in securing him Best Supporting Actor but I don’t think his actual acting had much to do with that. That film is now almost a decade old and nobody talks about Leto’s performance in positive terms. It’s typically cited as an example of the trite and stereotype-riddled theatrics of cis men playing trans women for glory and awards bait.

And then, of course, there is the Joker. What can I say here that I, and everyone else in my field, hasn’t said a hundred times before? It’s the performance that now stands tall as the go-to proof of the egotistical macho bullsh*t that tries to pass itself off as method acting when it’s really just a series of workplace safety violations. Warner Bros. and the cast and crew of Suicide Squad spent months hyping up his Joker as something of immense creative and emotional magnitude. This was something Special, a sign of Leto’s grandeur as a performer and further evidence of the importance of this character in pop culture. Instead, it all but killed the film, made Leto a temporary laughing stock, and killed off the concept of the method for a generation. It remains hilarious to look back at all that hype of how dark and dangerous Leto was in character, how nobody got to know the ‘real’ Jared because of his commitment, then watch him on screen for like 11 minutes playing a Juggalo gangster who sounds like Old Gregg from The Mighty Boosh.

Leto never went away (sadly.) He landed a startling amount of award nominations for his mostly samey work in The Little Things and as many people loved his Waluigi impersonation in House of Gucci as they did hated it. Both films still put a lot of emphasis on Leto’s intense commitment to the material but they notably avoided diving head-first into Joker territory. Even Morbius put emphasis on how he was so dedicated to playing a vampire from a comic book. It’s good to take your work seriously but every time I hear this crap from Leto, I wonder what it is he’s hoping to prove. Such strategies have given him this weird reputation and yet he’s consistently employed, even when the critical consensus waivers.

But mostly, I just don’t buy this guy as an above-the-line leading man. I don’t think he has the charm required to be that sort of on-screen presence. He keeps trying, though. On top of Morbius, he’s signed on to headline the next Tron movie, whenever that eventually goes into production. He seems to crave having that kind of appeal and he’s getting opportunities to try it out. Of course, we also wonder why anyone would bloody bother giving him those chances.

As I was writing this piece, Uproxx published an interview with Morbius director Daniel Espinosa, in which he admitted that Leto was often tough to work with and held up shooting because he refused to break character even when he needed to go to the bathroom. It would take him so long to limp to the toilet and back that the crew had to get a wheelchair for him to speed up the process. Seriously, why the f**k does this guy keep getting work? The sheer arrogance of these theatrics is evident but there’s something especially pathetic about doing this rigmarole for a comic book movie about some vampire dude. Not that doing it for an Oscar-winning drama would justify it or anything but this ‘process’ brings nothing to the table beyond irritation and inconvenience to the probably overworked crew. All that and he’s not even doing a good performance? Jeez…

I started writing this piece to try and figure out what role Leto fits into within the Hollywood ecosystem. My real answer is ‘wanker’ but I think his consistent upward failing is merely a symptom of a deeper and longer-running problem. Of course, Leto wants to be a leading man. It’s all about power to do and be whoever the hell he wants. I shudder to think what that leads to.

← A Small Appreciation for the Unsung Heroes of the Startup Scandal Series | 5 Shows After Dark: 'Tony Hawk: Until the Wheels Fall Off' on HBO, 'Big Restaurant Bet' Series Premiere Foot Network →