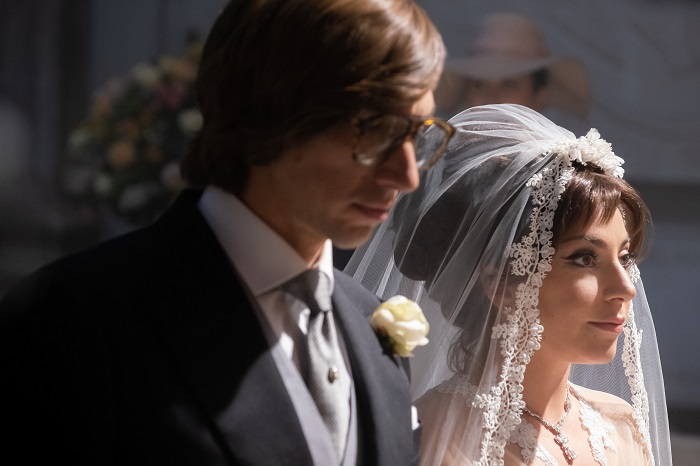 Review: ‘House of Gucci,’ Like Its Subject Matter, Is Divided on Class vs. Kitsch, High-Brow vs. Low-Brow, and the Result Is an Inconsistent Movie

Life is about balance, which must be why Ridley Scott made one great movie this year in The Last Duel and one middling movie in House of Gucci. Sure, Adam Driver is very tall in this, and at one point he throws a stack of foam coffee cups across a trailer in a surprisingly fluid, very attractive move before his Maurizio finally gets down to sex with Lady Gaga’s Patrizia. A gif of this moment does not seem to exist on the Internet, and that is why I am confident in saying that technology has failed us all. But House of Gucci can’t strike a consistent tone, and that indecision makes clear the surprisingly generic execution of this story.

Maybe a multipart miniseries, a la American Crime Story: The Assassination of Gianni Versace, could have tracked everything the film tries to sprint through: a marriage and a divorce, numerous power grabs and backstabs, changing tides in fashion and the corporatization of the industry. This is the kind of movie that primarily notes the passage of time through people’s changing hairstyles, and kudos to Lady Gaga for her willingness to wear an array of increasingly silly wigs, the hair of which never seems to move. (She gets off better than Jared Leto, whose skin cap is always showing and whose makeup never seems correctly blended.) But a true sense of time passing through character development or believable relationships? Nope.

House of Gucci is doing too much on its surface to do enough underneath; I’d be impressed if anyone watching felt a real emotional attachment to anyone on screen. The closest anyone got to making me care about them was Al Pacino, but he shares most of his scenes with Jared Leto, and my face naturally arranged itself into a scowl whenever Leto appeared. Whatever Scott saw in Leto was probably the same part of him that dismissively said “Mohammad so-and-so,” and that element of Ridley is not for me!

There are very broad motifs here: the betrayal of one generation by another, the suggestion that a family business is inherently a corrupt exercise, the allure of power and money being more attractive than love or intimacy. Are Scott and screenwriter Becky Johnston deliberately trying to say that the Gucci family were a bunch of buffoonish morons who deserved their own demise? … Maybe? But House of Gucci is so straightforward—and blunt, really, in its technicality—that it’s hard to tell whether there is really subtext here, or anything more subversive or surprising than what is directly in front of us.

Lady Gaga plays her venomous black widow character like a venomous black widow. Driver plays his nebbish good guy like a nebbish good guy. Jack Huston lurks hotly in corners, obviously lurking, and Leto turns himself into a caricature with a fat suit and some sloppy dance moves and would-be trademark term “Boof!” (Poor Paolo Gucci—this film does him dirty with Leto’s portrayal and by making him the subject, numerous times, of myriad insults; in reality, he helped design the iconic double-G logo that continues to adorn the fashion house’s products do this day.) House of Gucci opens with Lady Gaga purring the word “Power,” and there’s some fun in its early scenes as her character stumbles into a world of wealth and luxury of which she is completely unaware. (Mistaking Klimt for Picasso—how embarrassing! It doesn’t keep Driver’s Maurizio from wanting her, and to the actors’ credit, their violently passionate sex scene is one of the film’s spare thrilling moments.) But this is a recounting of history with no sense of modern flair or contemporaneous characterization, and especially in a year when Scott also made The Last Duel—which did both those things!—it’s strange to consider this film’s listlessness and imbalance.

The film spans from 1978 to 1997, first focusing on how Maurizio and Patrizia fell for each other (meeting at a disco party, during which she abandons the date who brought her as soon as she learns Maurizio’s last name is “Gucci”) and how Patrizia became involved in the family business. His father Rodolfo (Jeremy Irons) tells Maurizio to fuck around with the seemingly unsophisticated Patrizia, who only offers flattery or praise for something when she learns how much it costs, but never marry her; of course, Maurizio does, causing their estrangement. Meanwhile, Rodolfo’s brother Aldo (Pacino), irritated with his son Paolo (Leto) and his bad design ideas, gravitates toward Maurizio and Patrizia. (Pacino’s bemused line delivery of “How about that?” at a magazine story about his nephew’s wedding is the kind of humor this movie needed more of.) Patrizia sees in Aldo’s familial friendliness an opportunity. Why should Maurizio be a lawyer when the family business is right there? Doesn’t he want his wife, and their future children, to have nice things?

We all know where this goes, and because House of Gucci strips down this story to its barest essentials (and that pervasive anti-Paolo agenda), its joys are few. A thought-provoking element that ties the film to Scott’s The Last Duel is the insular nature of this male-led family, and how over and over they tell Patrizia that she is not a “real” member of the House of Gucci. Maurizio says it’s “my name, not ours,” Aldo warns her that she’s “not Gucci,” and even company higher-up Domenico De Sole (Huston), an outsider himself, looks at her with flat judgment. It feels like a missed opportunity that the film doesn’t draw a sharper line around this exclusion and how it reflects the mostly patriarchal nature of the fashion industry, or turn that observation into subtext about the exclusion of the actual Gucci family from the film itself.

Still, if one were to power through House of Gucci, it’s for the film’s widely varying performances. Gaga’s aggressive accent work is amusing, and Salma Hayek is surprisingly effective as a TV psychic who has a moment of legitimate clairvoyance that seems to shock herself. Driver makes an impact when he drops Maurizio’s aw-shucks characterization and begins turning the character away from affection toward Patrizia, and Pacino’s Pacino Energy™ is perfect in a scene when he learns of a bad business decision by Paolo and half-yells, half-wails “No! No!” over and over. But those are brief moments, and House of Gucci mostly feels ephemeral.

← Showtime's 'Yellowjackets': Who Else Might Be Alive? | Review: Oscar Isaac Holds Together Paul Schrader's Unwieldy 'The Card Counter' →