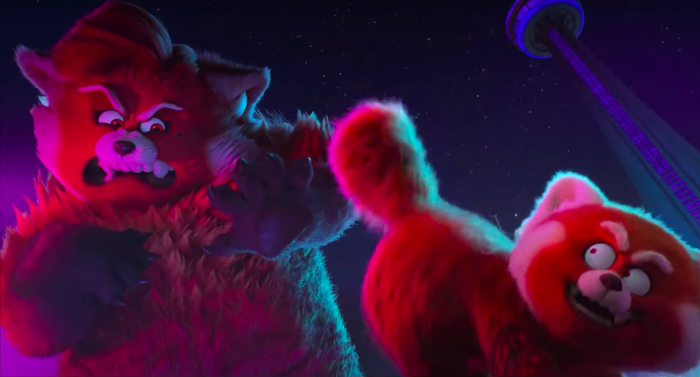 Ignore The Fake Controversy, 'Turning Red' Is Already Winning Where It Matters

Do you know how many teenage and tween/pre-pubescent girls there are in the United States? Everyone ages 10 to 19 that is.
Well, if the American Community Survey for 2020 is to be trusted, there are around 20 million. I guess in Canada it should be around 10% of that? And how many in this cohort on a global scale? According to UN projections, there are about 600 million. That’s not counting all of us who don’t shut-off a film because it doesn’t represent us. So once again, tell me exactly how small and incredibly specific Turning Red is?

US film critics with a very local mindset are the first boss that a “first but different” film will have to face. Unsurprisingly, there was no way Turning Red wasn’t going to bring the worst out of the US’ very local, very stagnant culture wars, that euphemism used in media to encompass any time the fragile, precious feelings of white, conservative Americans are confronted by anything “other.” Of course, they would react. Let’s run down all the firsts but different of Turning Red: First Pixar movie directed solely by a woman, Chinese-Canadian Domee Shi, set in Toronto, centered on a Chinese-Canadian teenage girl and her friends; it’s about puberty; it’s about cultural heritage and generational trauma. By now, anything by Pixar is regarded as sus by US conservatives, and then Turning Red drops with every frame of it being a transgression to the toxic discourses of the internet.

I’m here to tell you that Turning Red is winning. I wish I could hire someone to help me do those social media monitoring analyses, providing you numbers-based facts that show the Internet is embracing Turning Red. All I have is the gut-feeling maxim: I ain’t got no proof, but I ain’t got no doubts.

Forget about reactionaries and their review-bombing; forget about the overblown perception that they are dominating the discourse, something that seems to happen every time with a “first but different” hit (and the second, and the third…), because they aren’t, they are losing, overrun by a wave of newly minted fans and love bombing (the good kind).

… You still want to read what these idiots are saying, right? You still need some of that rush of indignation and anger with just a hint of feeling superior (which has been empirically proven, but… not the highest bar out there!). Even though you know it’s a drain on emotional energies that could be put into something good … or in getting pissed at Clarence Thomas?

Fine, whatever, just for a second, look at what these f—kwits are saying. Look at how even the arguments that are close to not being in bad faith are as feeble as the foundations of a beach-side building in Florida. Look at them, blow a fuse. Let it all go. I’ll tell you later how Turning Red it’s still winning. 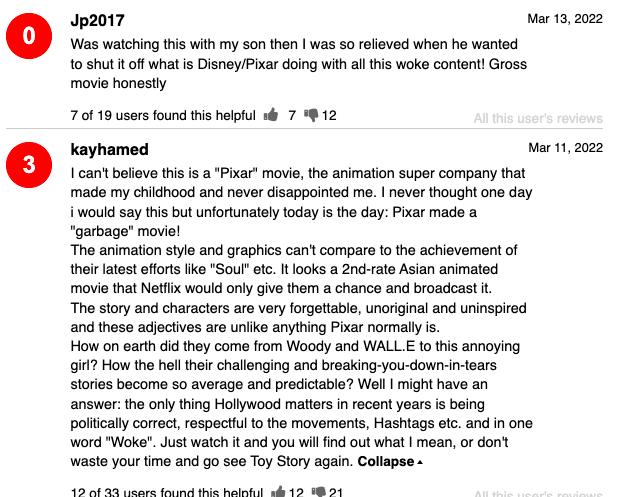 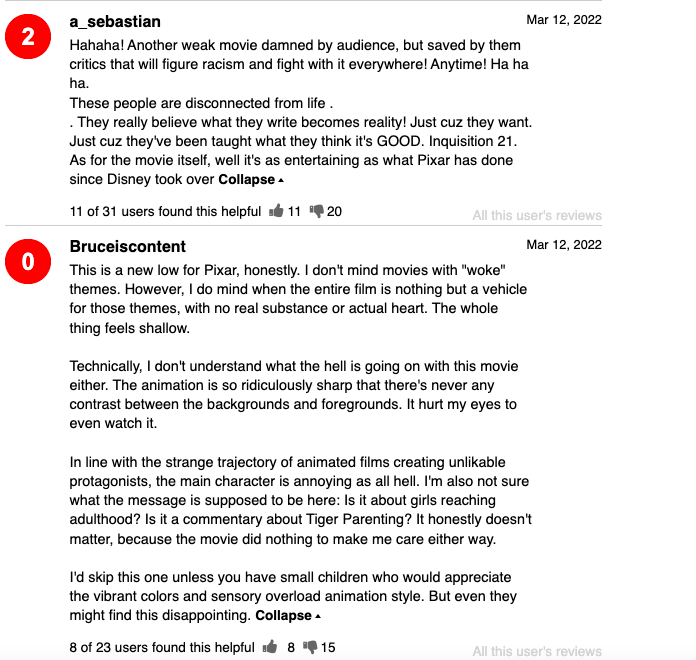 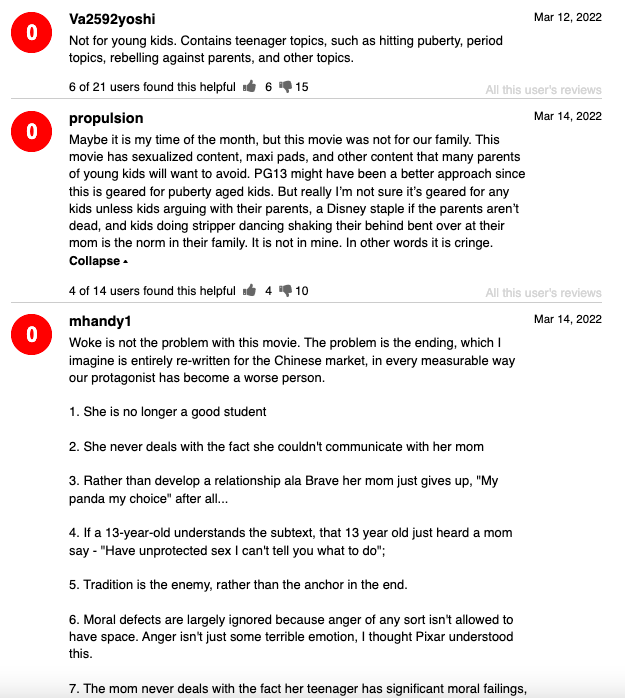 These were all taken from Metacritic, though I read the same stuff in IMDB. As in, I’m 90% confident the same exact postings were made, with the same exact writing and talking points. One thing that starts to become evident: All these people are Christian fundamentalists, ain’t they? We’ll get to that in a minute. However, if your children don’t know what periods are at the age of 8-ish (worse still if they’re 10 or older), then you are the problem; if you keep your children in ignorance about puberty and uteri and how babies are made, you have a problem (seriously, haven’t they ever been to a supermarket or a pharmacy? With whole aisles dedicated to pads and tampons? Don’t they have ads for tampons on US TV?). You have a problem because you are keeping vital information from them, information which can be taught easily and appropriately to kids at any age in their development because it’s about how bodies work. Not teaching them about that, or preventing them from learning it at school, that’s abuse.

Also, if you are unable to realize that a movie called TURNING RED about a 13. year-old. Girl. going. through. changes is going to mention periods and pads, then I don’t know if there’s anything I can say to you, because I don’t think you have the … you’re a dumb-dumb. The state failed you, your pastor failed you. Just leave your children’s education to the teachers. Or books. Or Pixar.

The review bombing did succeed somewhat. At Metacritic, IMDB, and Rotten Tomatoes, Turning Red’s user’s score lies below the average of other acclaimed Pixar movies. Not by much, but in Metacritic, it’s now as popular with the users as Uncharted. They should know by now that if a 0-Stars review includes the word “woke,” that review is worthless and should be immediately discarded.

However, as I mentioned before, there are places on the internet where Turning Red has been met with a deluge of appreciation, so much so that I can’t find reactionaries whining about it. Not a single one, or if there are, it’s one post after thousands of pieces of fanart, psychologists praising its themes, people feeling seen, etc. All of this you can find … on Twitter, Instagram, and Facebook. Yep, the cesspools. Just search Turning Red in any combination. No warning required because you will find nothing but positivity, the nutritional one.

i may have enjoyed turning red pic.twitter.com/WULyJUoZqr

Old Disney vs New Disney and honestly? I love it. #encanto #turningred pic.twitter.com/lnVVpV2eip

People saying Turning Red is ‘too mature/oversexualised’ (???) are really weird. If you think tweens having crushes/periods/going through puberty is inherently ‘grown up’ or ‘inappropriate’ idk what to tell you

That same generational trauma prevents me from foolish things like optimism, but I’m going to gamble on a prediction: The reactionary dipshits have been utterly trounced on the merits of the movie alone.

We have become used to cowardly Hollywood execs, easily startled into receding back to the status quo whenever, well, whenever white America starts bemoaning their loss of privilege. Diversity is so unfairly distributed and the trolling and harassment from incels and filo-fascists is so grotesque that sometimes we feel the need to stand up for any mediocre, four-quadrant movie (coughCaptainMarvelcough) just to convey a message to Hollywood: Whatever, ignore the assholes, give us more of this, hopefully good, but more.

Turning Red’s succeeds in that it doesn’t need to make any of those excuses for itself. Now let’s hope Bob Chapek doesn’t read whatever he wants to read. Don’t mind conservative America whining about Disney becoming woke, do you actually think they’re going to dump Disney for Eenie-Meenie, Itsy-Bitsy Ben Shapiro? Remember, Disney is not about making movies for the parents; it’s about making movies for people who might become parents in the future.

Read between the lines of all those fundie parents screaming “will somebody please think of the children,” and you’ll realize they have a point, and it’s Turning Read ultimate greatest achievement: teaching kids that disobedience is your right when facing unreasonable parents.

This is probably a bunch of pseudo-psychology, but authoritarian governments and authoritarian families have several things in common, chief amongst them paranoia about their own fragile ideological foundations, which only grow worse as the outside world steps further into … freaking rationality. Since authoritarian families cling to tradition, whenever a movie exposes that a toxic tradition is founded on generational trauma, believe me when I tell you that’s devastating for the authoritarian mindset.

Authoritarians are always paranoid about things that can challenge them, their usual solution is banning, as we’ve been seeing coming back with the fury of a cornered snake. They will start burning the obvious stuff and then overreach and ban every unsanctioned cultural expression just to be on the safe side (like the Greek military junta in the ’50s and ’60s that banned music being played in public). But there is a specific type of art, be it books, movies, or music, that hits authoritarian mindsets straight in the gut. Art that is so subtle but so incisive that it is even more dangerous for authoritarianism than anything explicitly political or sexual or whatever. This makes authoritarian mindsets lose. their. god. damned. minds. Because it’s impossible for them to try to ban it without revealing themselves, the emptiness of their foundations, and endgame. Think how US readers in the 1950s lost their shit with Shirley Jackson’s “The Lottery.” Think the fascist presidential candidate in Chile railing against beloved children’s show 31 Minutos. Turning Red is a new entry into that prestigious club, and with an even more transgressive message: Disobedience is good because your parents are flawed, something which any sensitive child can then project to other structures of power. It is, in that sense, a truly transgressive film, truly revolutionary even. Not unlike things that portent to be so, like La Casa de Papel.

But when it comes to your parents? Boy, do we need more media for children and teens that teaches them that parents are human and, way too often, not in the right. For US children being raised by reactionary parents, or anywhere else, this message couldn’t be more timely. But Turning Red also stresses empathy towards the broken parts of your parents, which rounds its thesis and helps children (and all of us young adults) raise better questions about their family dynamics.

We cannot forget the gender and cultural specificities either. There’s no authoritarianism without patriarchy; imagine how transgressive it is, in sexually repressed environments, to equate a girl’s puberty not with a horrible red monster, but with what is widely considered the most adorable animal out there. And then there’s the fact that the first time a major Pixar movie (and by extension, Disney) addresses puberty is through the eyes of a Canadian-Chinese girl. I wonder if this terrifies white America, the chance their daughters could identify with an other? You don’t see them losing their shit about the fact that pretty much EVERY Disney story centers on a child disobeying their parent. If you think that’s too convoluted for the kind of white American parents that would ban Turning Red, the fact is, authoritarian mindsets are finely tuned to notice these subtle but precision-targeted stories on a gut-level basis over a cognitive one. Luckily for their children, they will always find a way to watch these kinds of stories.

Alberto Cox also loves Turning Red because he is very involved in the awareness and representation of Red Pandas in media. They are the best Pandas, much better than those other lazy bums.

← Does Dorothy Turner (Lauren Ambrose) Die in the Season 3 Finale of 'Servant'? | This Week's Dramatic 'Survivor' Endured an Impossible Immunity Challenge and a Wild Tribal Council →