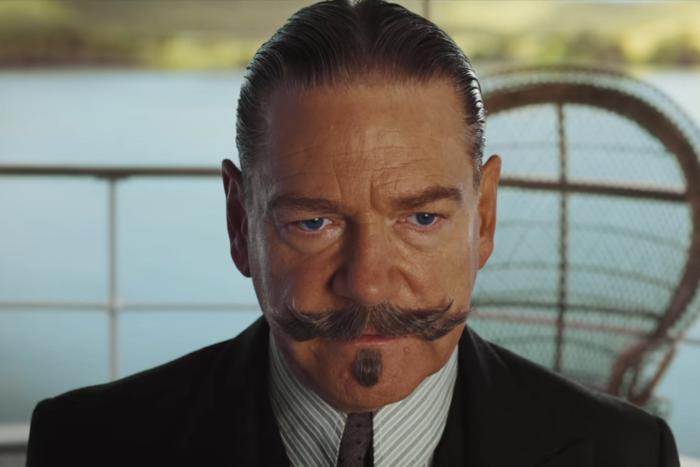 Spoilers ahead for the opening of Death on the Nile.

Kenneth Branagh’s adaptation of Agatha Christie’s Death on the Nile isn’t the kind of bad movie that’s usually worth over-analyzing. It’s just sort of messy, with bad CGI, mixed acting from its major ensemble, and pacing issues that stop it from being the zippy murder mystery its source material conveys so effortlessly (you can read my full review here for a more detailed commentary.) In terms of bad films, it’s not Cats or Winter’s Tale. Nobody’s going to be hosting rowdy screenings of it or turning it into a drag show. And yet I cannot stop thinking about it. More specifically, I can’t stop thinking about the first ten minutes. A middling studio film with a $100 million budget has one of the most baffling scenes I’ve seen on the big screen since Rebel Wilson ate human cockroaches.

In a new addition to the story of Hercule Poirot, Belgium’s most beloved jocular detective, Branagh and screenwriter Michael Green have added a tragic backstory. It’s the kind of unnecessary padding that is now apparently required by major IP franchises, like when we were given an explanation as to how Han Solo got his surname. You know, because we were all dying to know about this major detail. It’s a bad development for film, in my opinion, a pointless red pen to the margins that mistakes Easter eggs for depth. So, when Death on the Nile opened in the trenches of the First World War, I instantly had to smother back a groan.

Shot like Sam Mendes’s 1917, as if Branagh was keen to remind the audience that he could totally make a war movie if he wanted to, the film opens with a Belgian battalion preparing to be sent over the top in a maneuver that will clearly end in a complete massacre of their troops. Who can save them? A young farmer named Hercule Poirot, of course! Branagh’s been de-aged for this scene, looking more smooth-faced than he did in the early ’90s when he was the next Laurence Olivier. He’s but a lowly soldier yet he’s smart enough to notice the migration of the birds with the wind, leading him to suggest a genius battle strategy to his captain, a man with a very familiar-looking Lorax mustache. For some reason, the captain decides to listen to this private who everyone knows is a genius or something, and his plan works. Everything is great, but then the captain trips a wire and a bomb goes off.

Cut to a sea of beds where injured soldiers are tended to by nurses. One hot lady turns up and she is revealed to be Poirot’s fiancé. That’s what this story needed: a dead girlfriend for the man’s motivation. It’s been a while since I’ve seen that reductive trope in use. Poirot is determined to dump his fiancé because he can no longer offer her the life he promised. She refuses to accept this, so, in a moment taken straight from the Two-Face reveal in The Dark Knight, Poirot moves his face to reveal his horrifying facial scars. Well, I say horrifying but the moment reminded me most of when we see Gerard Butler’s face under the mask in The Phantom of the Opera and he just looks like a guy with bad sunburn. Poirot thinks this will be enough to put off the hot fiancé who we will never see again. She responds very casually to his plea of what he shall do now with such a pained visage: ‘Simple: You’ll grow a mustache.’

And that’s how Poirot got that mustache!

It’s a moment so out of left-field, so unnecessary, so bewildering in its intent and execution, that I almost admire it. I’ve spent too much time thinking about the studio notes that may have inspired it, or the rant from Branagh to ensure that it stayed in the final cut. It feels like a long reroute to explain the mustache to audiences who were initially confused by its shape. Poirot’s luxurious mustache is the stuff of literary legend and it’s seen its fair share of interpretations. We may see David Suchet’s career-defining performance as the dominant Poirot but cases can be made for the likes of Peter Ustinov and Albert Finney. I imagine that Branagh didn’t want to be accused of copying anyone and felt it necessary to put his unique stamp on a character who’s received multiple reinventions over the past century. That still doesn’t explain why he went to Whoville and ripped the facial hair off the first creature he saw. Really, the new backstory only makes it more inexplicable. How the hell would you grow the exact same ‘tache as your beloved captain over scarring that ‘extreme’? Would hair even be able to sprout from there? Or has Hercule secretly been gluing that thing to his upper lip for years and hoping he’s never caught in a sudden rainstorm?

The decision to add a tragic backstory to Poirot, a character defined by his jocularity, is the kind of Hollywood nonsense that leaves me feeling utterly exhausted. Nobody asked for it, it doesn’t make the source material better, and it bogs down the narratives that we came for in the first place. Branagh was already an odd fit for the character but his version, tortured by his past, is particularly awkward. Poirot doesn’t yell, he doesn’t get into action movie situations, and he doesn’t spew his backstory to women who might be vaguely interested in dating him (Sophie Okonedo, you can do better.) It’s the logic that’s hampered all of those Disney live-action remakes, the insistence that what stories like this need to justify their existence is padding that leaves nothing to the imagination and believes tidbits will satisfy the urge for proper character. So, even someone as intrinsically positive, so imbued with the glow of warmth as Poirot, has to suffer such a fate. That means that the mustache must receive emotional closure, and the movie ends with the newly unburdened Poirot waiting for Sophie Okonedo to notice him, ‘tache-free. Maybe he finally heard the news that chicks dig scars.

The year is young so perhaps I’ll see a movie moment more baffling than Poirot’s sad ‘tache but this is one I’ll treasure long after 2022 is gone. Maybe when Branagh makes his third Poirot film, he’ll tell us the surprisingly upsetting backstory behind his love of cakes.

← Reddit Asks the Question: 'What Is One Thing You Underestimated the Severity Of Until It Happened To You?' | 'The Endgame' Is NBC's Comically Inept 'Killing Eve' →