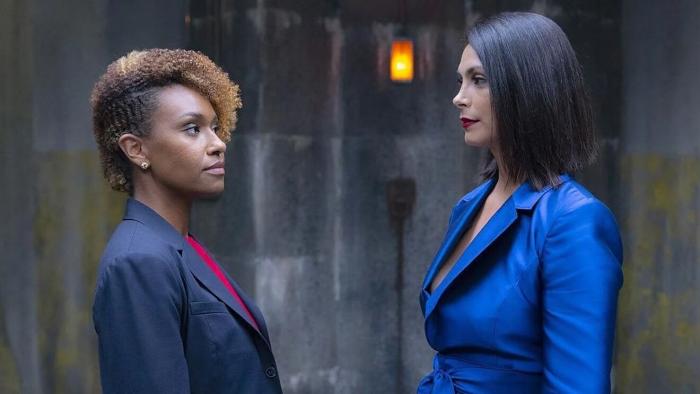 NBC’s almost comically silly Endgame is centered on Elena Federova, played by the stunning Morena Baccarin. Elena is being held in an FBI holding room, which she cooly traipses around while sporting an Anna Delvey accent and wearing a blue gown that looks as though it were purchased from the J. Crew Wicked Witch collection. She’s less the brilliant mastermind that she’s described as, and more like a flashy magician who robs a bank with the wave of her hand and apparates her nemesis with a cunning smirk. Though ostensibly it is Elena who is being interrogated by the FBI, she is in full control of the room, circling around her interrogators like a Maleficent shark, three steps ahead of everyone else.

Her “endgame” is unclear, although it involves a violent backstory (told in flashbacks) set in Ukraine, being let out of her holding cell by the end of the day, and freeing her husband, Sergey (Costa Ronin), from prison. How she accomplishes this has something to do with robbing a series of banks and collecting blackmail material on her FBI interrogators and other government officials. This is accomplished by her army of suitably attractive rooks, who spray gunfire into the ceiling of banks and blow up safe deposit boxes containing valuable information. All of this mostly feels like an excuse for the pilot’s director Justin Lin to spend as much of the budget as possible on explosions and cars screeching, which mostly serve as rabbits for Elena to pull out of her hat from inside the cell and say things like, “What took you so long?”

Her main rival here is Val Turner (Ryan Michelle Bathe), an FBI agent disgraced by her own honesty. She is so devoted to “the law,” or “justice” or her job that she snitched on her own husband (Kamal Angelo Bolden), a fellow agent serving 10 years after she ratted him out. He appears to have no hard feelings, notwithstanding the divorce papers he serves her from prison, which appear to be an excuse to connect Val with both her husband and Elena’s lawyer, who are one and the same. Val’s husband, meanwhile, also appears to be a prison friend/conspirator with Elena’s husband. It’s a classic Alias trope.

Endgame comes from writers Jake Coburn (Quantico, Arrow) and Nicholas Wootton (Stumptown, Chuck), and looks like something akin to a cross between The Blacklist and a broadcast network version of Killing Eve without any of the lustful subtext (shame). Val and Elena are engaged in a long game of cat-and-mouse, where Elena respects Val but clearly has the advantage. Everything else, it seems, is just noise — supporting characters like Billions’ Kelly “Dollar Bill” AuCoin who are written specifically to react, or scowl, or throw piles of paper onto tables and say things like, “This is not your jurisdiction,” or “who the hell do you think you are?” or “get the Attorney General on the phone.”

There would be no other reason to continue watching The Endgame but for the magnetic presence of Morena Baccarin — the accent notwithstanding — and only the vaguest sense of curiosity. Whatever “The Endgame” might be, the series has no incentive to reveal it until the end, and if The Endgame is successful, they’ll push it off for as many as seasons as possible (see: The Blacklist), or it will be canceled after one season and the mystery will never be resolved beyond whatever sparse details the showrunner provides to Entertainment Weekly in a futile effort to convince another network to pick it up. We’ve been down this road before, but at least this one is paved in Baccarin’s dark lipstick and wry, self-assured grins.