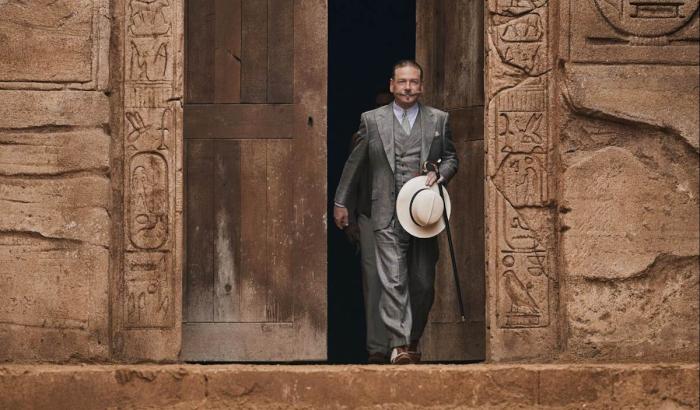 Review: ‘Death on the Nile’ Sees Poirot Return for a Murder Mystery with Diminishing Returns

My friends, there has been a murder. Hercule Poirot, one of literature’s most beloved detectives, returns to the big screen with Kenneth Branagh once again in leading and directorial duties. After solving the Murder on the Orient Express, Belgium’s favorite (sorry, Tintin) is in Egypt for a break from all this crime-solving. Of course, that doesn’t stop him from stumbling into a curious case involving some very rich people and their respective dramas: there’s a newlywed couple (Armie Hammer and Gal Gadot) celebrating their honeymoon; the jilted lovers (Emma Mackey and Russell Brand); a rabblerousing godmother and her beleaguered nurse (Dawn French and Jennifer Saunders); a sultry singer and her manager niece (Sophie Okonedo and Letitia Wright); the put-upon French maid (Rose Leslie); and the sardonic society lady with her eager son (Annette Bening and Tom Bateman). Expect champagne, guns, deceit, and interrogations.

Over two years on from its initial release date, Death on the Nile is doing well enough at the box office and with critics to suggest that Sir Ken could turn the Poirot saga into his own franchise should he so desire (let’s see how he does at the Oscars next month.) In a sense, I’m glad we have this film. It’s rare to see such undivided focus paid to an old-school murder mystery in current-era Hollywood, and there are only so many Knives Out sequels Rian Johnson can make at any given time. I’m happy to be reminded now and then that there is an eager paying audience for adult-oriented stories designed to divert in pleasant manners. If only Death on the Nile could have fulfilled that simple promise.

Don’t get me wrong, for there are plenty of moments of amusement in the film, but they’re often saddled in-between Branagh’s moments of needless grandeur and perplexing backstories. Did we really need an origin tale for Poirot’s mustache that involved the trenches of the First World War and a dead fiancé? The movie opens with a lavish battleground setting that felt like Branagh telling the audience that he totally could have made 1917 if he wanted to, OK? It leads to moments of laden emotion throughout the narrative that constantly feel at odds with the more deliciously devious tone of the mystery itself. There’s a reason crime fiction has endured for centuries, but this film makes you wonder if the director and writer (Michael Green) fully understood that. It doesn’t help that Branagh clearly reminded himself at some point that Poirot is supposed to be jovial, with a great love of puddings, so those bursts of brevity are further rubbing up against attempts at tear-jerking. Yes, Branagh remains wildly miscast and yes, the mustache is still weird. That we now have a sad-boy explanation for why it looks so daft only makes it sillier.

The ensemble is a mixed bag, with few real standouts. Often, it feels like the star-studded cast turned up on set and had no idea who they would be playing. Emma Mackey of Sex Education fame is a treat as the jealous ex-girlfriend who was dumped for her richer best friend. Mackey gets some real meat to chew on and looks beautifully era-appropriate in a way some of her colleagues don’t. Russell Brand is subdued to the point of soporific, but Sophie Okonedo is having a ball as the singer with an electric guitar and an endless number of Lauren Bacall-esque quips. Some of them are hampered with cringe-inducing accents, like Rose Leslie’s Pepe LePew French inflections that she seems embarrassed to even be saying. At least they all do better than Gal Gadot, who is painfully miscast and has never been flatter as an on-screen presence. Nobody ever accused Gadot of being a good actress and here, she is tasked with playing a prickly and self-serving rich girl who is nonetheless easy to be charmed by. She seems lost, relying on ill-suited wide-eyed naivety to get through the longer scenes. This part needed some inner darkness, a dash of bitters to the champagne cocktail, and Gadot can do nothing but hope her eyes water enough to convey some sort of emotion. Maybe it’s just the sand.

There are pacing issues abound and moments where the camera moves around like a lost kid waiting for someone to yell ‘stop.’ While some scenes look sumptuous thanks to expensive production design, other moments are dinged by some seriously ropey CGI, such as a scene featuring Poirot at the pyramids of Giza with greenscreen effects that look straight out of 1994. Half the fun of Death on the Nile is in its beautiful locales, most of which here look fake or lifted from a BBC documentary but with none of the awe. The solution to the whodunnit won’t surprise anyone (congratulations to everyone unspoiled by a book published in 1937) but that’s not really the problem here. The issue is more that the joy of watching Poirot’s deduction skills is sapped out by Branagh’s dour approach to the character, a slow first half, and a rush to conclude the movie in under two hours. Christie’s novels could be labyrinthine affairs in terms of the crimes she created but their appeal was far simpler: there’s fun to be had in catching the bad guys. Rian Johnson got it with Knives Out, a film that reveled in the ludicrousness of its ensemble yet remained tethered to the present with relatable themes and figures to root for. Here, we don’t have much beyond the occasional aesthetic joys, and as the film goes on, those become few and far between.

Death on the Nile is in theaters now.