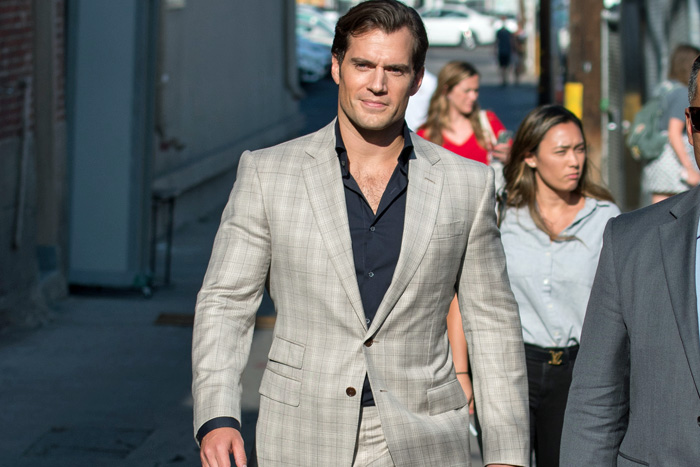 On Monday, I covered the possible reasons why Henry Cavill didn’t support the Snyder Cut alongside his Justice League co-stars, and I’m going to be perfectly honest with you: That whole piece could’ve easily blown up in my face at any second. Shit, it still could bite me in the ass — along with the piece you’re reading right now! All it takes is Cavill hopping on Instagram, posting a quick “Sorry, I was tied up” followed by the hashtag, and I’m boned. Instead, he’s ended an almost week-long social media break by sharing his cover story for Men’s Health that just dropped today. Granted, all of this was coordinated months in advance to build up hype for December’s premiere of The Witcher, but the interview does include some choice words about Justice League that certainly explains his silence on #ReleaseTheSnyderCut.

For the record, Cavill does try to keep the interview contained to The Witcher, but it’s only inevitable that the topic of Superman is going to come up in the course of reflecting on his career. (Although, interestingly, his work in The Man from U.N.C.L.E. is what landed him the role of Geralt of Rivia.) To his credit, he somehow manages to walk a fine line between professionalism and being perfectly blunt.

After working on Fallout, Cavill was keen to do his own stunts on The Witcher, including rigorously choreographed sword fights. But he was most excited, he says, about the chance to understand Geralt’s place in the world. “It’s funny how much he’s actually like us,” he says. “Geralt has that thing of trying so damn hard and being misconstrued or not appreciated — of people having a negative opinion of you, despite you actually trying to do the right thing.”

Which brings to mind Cavill’s lengthy stretch as Superman — the three movies that made him an international star while also leaving a large segment of fans unsatisfied. He’s cautious when discussing the films themselves, so consider these assessments the height of his candor: Man of Steel? “A great starting point. If I were to go back, I don’t think I’d change anything.” Batman v Superman? “Very much a Batman movie. And I think that realm of darkness is great for a Batman movie.” Justice League? “It didn’t work.”

It’s revealing that Cavill only speaks fondly of Man of Steel. Obviously, it’s his big debut as Superman, and unlike Brandon Routh — who bested Cavill for the part in Superman Returns — it wasn’t a once and done role that left his career in a ditch. By comparison, things could’ve gone way worse than they did. But it’s notable that as soon as Christopher Nolan washed his hands of playing Zack Snyder’s babysitter, the quality of Superman’s appearances devolved even further than neck-snapping MurderMan who just lets Pa Kent die. With Nolan gone, Snyder was left to his own devices on Batman V Superman and turned in an overly dark funeral that featured the most morose, dickish interpretations of the biggest superheroes on the planet. Being the huge dork that he is, it’s not surprising that Cavill knew something was wrong. As for Justice League, well, we all saw what happened there, which was a massive studio freak-out after Batman V Superman landed like a wet turd.

Here’s what’s frustrating though: Henry Cavill’s casting was never the problem. An actor is only as good as the writing and direction he receives, and Cavill got thoroughly boned in that department. Even worse, he knows it, and he’s now trapped in an uphill battle of crawling out of the toilet that Warner Bros. flushed him down when it rid itself of Snyder. However, he seems pretty hell-bent on keeping the role and even reveals that the cape is in his closet. “It’s still mine,” he states at one point.

“I’m not just going to sit quietly in the dark as all this stuff is going on,” Cavill says of the rumors. “I’ve not given up the role. There’s a lot I have to give for Superman yet. A lot of storytelling to do. A lot of real, true depths to the honesty of the character I want to get into. I want to reflect the comic books. That’s important to me. There’s a lot of justice to be done for Superman. The status is: You’ll see.”

Knowing that Cavill wants to play Superman again sheds a whole lot of light on why he’s content with leaving Justice League buried where it belongs and has no interest in spitting in Warner Bros.’ eye by demanding the studio release the Snyder Cut. Plus, he’s seemingly not thrilled that his Superman was strapped to Ben Affleck’s Batman, which has created all kinds of problems now that Robert Pattinson is rebooting the character. How the f*ck do you thread that needle?

If you want to check out the whole interview, there are sexy photos of Cavill who got shot down as the new James Bond in Casino Royale because he looked “chubby” during his audition. Hollywood is wild, man.

Henry Cavill swaps his Superman cape for leather armor in #TheWitcher, in a role he won by beating out 207 other guys. It’s not the first—or probably the last—time the self-described “chubby kid” has crushed the odds.

← 'Mr. Robot' Uncovers Its Biggest Mystery. Maybe It Shouldn't Have | Spoilers: Who is the Killer in Netflix's 'Earthquake Bird'? →