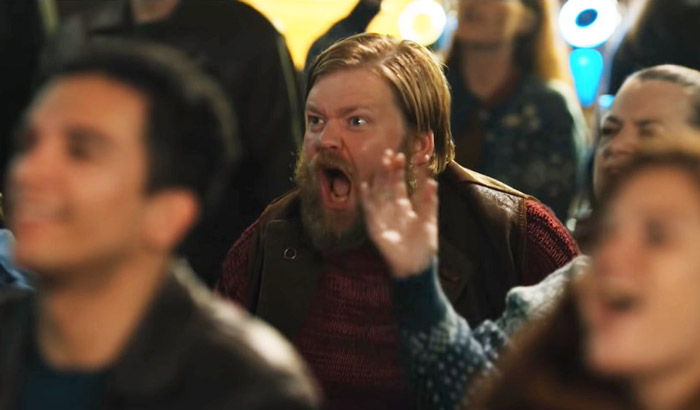 The soundtrack of Eurovision Song Contest: The Story of Fire Saga has become a favorite among fans, boasting bops like “Double Trouble,” “Lion of Love,” and—of course—“Jaja Ding Dong.” (DING DONG!) It’s also become the inspiration for a newly minted bar in Iceland.

Reykavik Grapevine reports the Cape Hotel in Húsavík opened a bar named Jaja Ding Dong on July 11, in honor of the rousing song.

Húsavík was a primary shooting location for Eurovision Song Contest: The Story of Fire Saga. Not only is it the home to the movie’s fictional Icelandic band, Fire Saga, but also it’s the namesake of the grand finale song that a lipsyncing Rachel McAdams performs before a captivated audience. (The song itself was performed by Swedish superstar My Marianne, A.K.A. Molly Sandén.)

Örlygur Hnefill Örlygsson, owner of the Cape Hotel, had some other name for the bar planned. However, once he saw Eurovision Song Contest: The Story of Fire Saga, he knew nothing could compare to Jaja Ding Dong. (DING DONG!)

He told the press, “Do you think that you would not seize such an opportunity when it comes flying at 180 kilometers per hour in your lap?”

Örlygsson fondly recalled the production of Eurovision Song Contest: The Story of Fire Saga, noting that after filming wrapped for the day, stars Will Ferrell and Pierce Brosnan would come by the hotel and “were hanging out with us a lot.” So, it’s little wonder he’d want to give tribute to this time and Húsavík’s historic contribution to cinema. He also noted that he was very moved to see My Marianne’s awe-striking ode to his hometown. However, “Even though we like the Húsavík song, we are not going to call the bar Húsavík.”

Instead, Örlygsson chose to name his bar after a song that—yes—is full of none-too-subtle sexual innuendos. Yet, “Jaja Ding Dong” (DING DONG!) is a song that speaks to the fun had in a pub setting. It speaks to a joyful band, a cheering audience, a community coming together in revelry. It’s basically Eurovision Song Contest: The Story of Fire Saga’s answer to “Sweet Caroline.” (BAH BAH BAH!)

Unknown is if Örlygsson is working the movie’s soundtrack into the mix played at the bar. But let’s assume that the playlist is this: