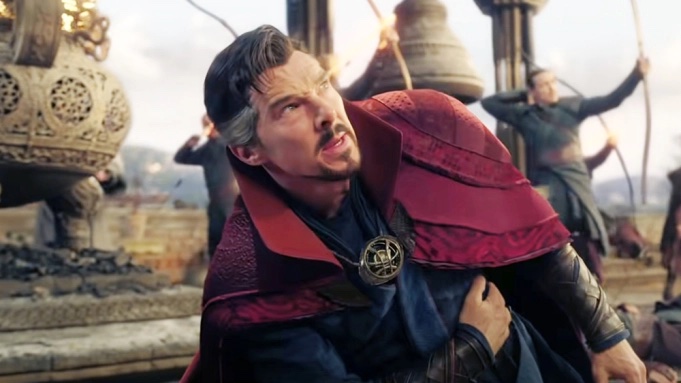 'Doctor Strange in the Multiverse of Madness' Is Exhilarating, Terrifying, and Littered with Issues

Phase IV of the Marvel Cinematic Universe has been — if we’re being honest — something of a mixed bag. COVID-19 issues aside, with the exception of Spider-Man: No Way Home, we’ve yet to see a real box-office-smashing juggernaut like the majority of the previous phases. Black Widow was absolutely enjoyable, but suffered from its small-screen release (and the frustration that came with it being released after the character’s death). Shang Chi and the Legend of the Ten Rings was fantastic (and potentially one of my favorites), but The Eternals? Ehhhh at best, sadly. Then there’s been a seemingly endless line of TV shows, ranging from great (Hawkeye, Loki) to OK (Falcon and the Winter Soldier) to somewhat middling (Moon Knight). Right in the middle of all that fell WandaVision, an incredibly high-concept series about Wanda Maximoff’s struggles in the aftermath of the loss of Vision.

And it’s that dynamic that brings us to the second Doctor Strange film, Doctor Strange in the Multiverse of Madness. Directed by Sam Raimi, it’s a wild, unhinged journey across the ever-expanding multiverse, previously touched on in Spider-Man. Only this time, Strange (Benedict Cumberbatch) is trying to protect a mysterious teenager named America Chavez (Xochitl Gomez) from dimension-hopping demons trying to capture her. There’s all manner of mystical mumbo-jumbo, and of course magical books (because Raimi loves himself a magical book), and a large cast both familiar and surprising (in some cases — no spoilers! — very surprising). Wanda is brought into the fray when Strange seeks out her help, only to discover that Wanda may be interested in doing more harm than good. Shattered by the loss of Vision and the children that she essentially magically created in WandaVision, Wanda aka The Scarlet Witch has grown increasingly unstable and, quite frankly, dangerous.

There’s a lot to enjoy in this interdimensional romp, not the least because it has Raimi’s bonkers handprints all over it. Doctor Strange in the Multiverse of Madness is the closest thing to a straight-up horror movie that we’ll see out of the MCU, and in many ways, that’s what makes it fun. The tension is high, the environments are weird, dark, and creepy as hell in some cases, and there are parts with genuine jumps and scares. If anything, the film is a little too scary — I took my ten-year-old son to see it and there are scenes that were definitely too much for him, so parents beware. There is a surprising amount of blood and even a healthy dose of dismemberment — off-screen, but still obvious. That said, as a fan of the Evil Dead films and Drag Me To Hell, the scarier elements were an unexpected delight for this horror fan.

Casting-wise, the film remains as strong as any in the MCU. Benedict Wong returns as the implacable Wong, still the Sorcerer Supreme since Strange died/returned, and he’s a sardonic joy to watch. Rachel McAdams’ Christine Palmer returns, too, not seen since the first film and thankfully given much more to do here (and in fact becomes critical to the labyrinthine plot). Chiwetel Ejiofor returns as the sorcerer Mordo, and then there’s a wild collection of cameos that are too delightful to spoil — let’s just say that traversing alternate universes gives Raimi and writer Michael Waldron (Loki) all kinds of toys to play with.

Despite all the fun, the film hits some significant bumps, and one of the biggest is the character of Stephen Strange himself — Cumberbatch gives it his all and his dry wit and cleverly expressive face make him fun to watch. Yet it’s hard not to see the MCU’s depiction of him as little more than “Iron Man but make him magic” in many ways. He’s too smart for his own good, he doesn’t let people get close to him, his best efforts end up causing more harm than good and he’s often the cause of his own problems, and magic — much like Tony’s tech — has become a lazy way to resolve plots without having to actually explain much. Too often, Strange can do something “because magic!” just like Stark could do something “because technology!” and after a while it can be a bit boring, even though what you’re seeing onscreen is impressive and astonishing from an effects standpoint. It would be nice to see the character expand in a direction that wasn’t so familiar.

That said, the larger problems lie with other characters — two in particular. Here’s where I’ve no choice but to wade into slight spoiler territory, so feel free to skip to the end if you want to be completely unspoiled. OK, ready? Here we go.

We’ll start with my minor gripe, and that’s the character of America Chavez (and this has nothing to do with the solid performance of Xochitl Gomez). Yes, this is me pushing up my glasses and “Well actually-ing my way into this but there is so little of what makes the comic book character great here. America Chavez is a brassy, confident, powerful entity in the Marvel Comics, a take-no-shit powerhouse who is both a team leader and a solo force. This one is a scared, lost kid who doesn’t understand her powers and ultimately needs the guidance and care of Strange to even begin to control herself. Perhaps this won’t resonate as much with the non-comic readers, but I couldn’t help but feel it coming off as a bit patriarchal. Couple that with the fact that Chavez is one of Marvel’s few proudly lesbian characters and that’s completely ignored here, and her whole character feels like a missed opportunity. Somehow Marvel took a potential cultural icon — a mega-powered gay Latina with personality to spare — and reduced her to a scared kid with a rainbow pin on her jacket.

It’s the second issue that smarts a little more though. There’s no denying that Wanda Maximoff going full-tilt Dark Phoenix with her Scarlet Witch persona makes for a compelling watch, and Raimi does an excellent job of making her one of the most terrifying adversaries in the MCU — because if you haven’t figured it out yet, Wanda is the actual Big Bad here. She can’t recover from the loss of her family, and it drives her around the bend, willing to manipulate and change reality to recapture what she’s lost. Had it stopped there, it would have been manageable. Had her efforts had some unforeseen ripple effect on the multiverse that brought forth some evil? That would have worked! Unfortunately, Raimi and company went far darker than that, and Wanda becomes an absolute monster — slaughtering dozens, if not hundreds — to achieve her goals. She’s an unstoppable nightmare, and it feels like a genuine disservice to the character.

Not for nothing, but didn’t we do this already? Wanda controlling reality and manipulating people to recreate her lost world? Isn’t that what WandaVision was? Yes, Wanda in the comics also has her moment of reality-destroying madness that led to the infamous House of M storyline that this obviously draws from, but this felt different — harsher, crueler. Multiverse of Madness feels like Marvel decided that they were too constrained on Disney+ and wanted to recreate that chaos and madness, but on an unfathomably brutal scale. What was the point of redeeming Wanda at the end of WandaVision if she was just going to destroy friends and foes alike to achieve similar goals? It was like watching the Marvel version of Daenerys Targaryen go all Season 8 on everything around her, and it was deeply unsatisfying.

Sam Raimi entering into the MCU was definitely a fun idea and Doctor Strange in the Multiverse of Madness is frequently an exhilarating, sometimes even terrifying endeavor. It’s got some utterly amazing action sequences (a fight scene using nothing but music is one of the best things Marvel’s ever done, full stop), breathtaking cinematics, and some great character moments. Yet it’s difficult to overcome its biggest stumble, something that felt like a nasty bit of character assassination. Coupled with Strange’s odd lack of any sort of progression, and it all begins to feel like a distraction, pretty pictures made to cover up a lack of characterization. The film is more than that in many ways — I can’t condemn it as being bad, even if it being rather child unfriendly is a bit of a bummer. Yet its failures are significant, its missteps can’t be ignored, and they ultimately mar something that was so remarkably close to great.


← 'Under the Banner of Heaven' on FX Is an Engrossing, Eye-Opening Murder Drama | Highlights: Benedict Cumberbatch Hosts a Hit-and-Miss 'SNL' Mother's Day Episode →