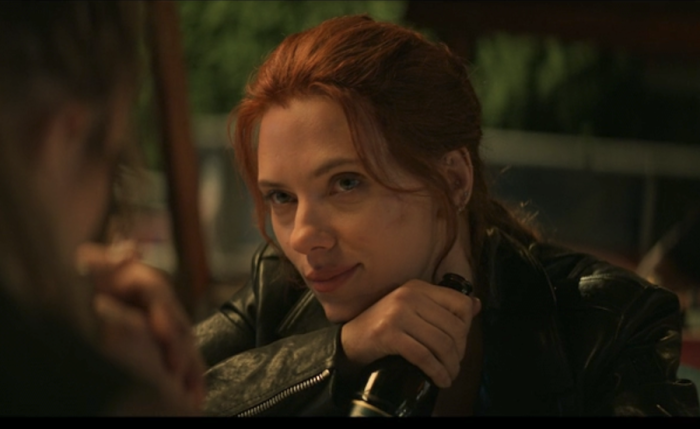 This should hardly be a spoiler at this point, but it’s worth repeating: Natasha Romanoff (Scarlett Johansson) was killed off in the events of Avengers: Endgame. That is the future that casts its long shadow across Black Widow, the much-delayed Nat solo entry in the MCU. The big question heading into the movie was whether it could justify its own existence in light of that fact. Is there a point to belatedly illuminating a fallen hero, or will it just underscore the fact that Nat deserved the spotlight much earlier? Is this all just a futile gesture, or does it have something new to say? Ultimately the answer is… kinda both, actually. Imagine taking a doggy bag home from a Michelin-starred restaurant and reheating it in the microwave the next day. The flavors are all still there, it’s probably easier and tastier than whatever else you might have been cooking for yourself instead, but it’s all gone a bit rubbery. It’s good, but it doesn’t hit the way it could have. It’s simply too late. Black Widow is the reheated leftovers of the MCU.

The movie is positioned after, or within, the events of Captain America: Civil War, so like… 2016 or thereabouts? A bunch of our heroes are locked up in The Raft by Thaddeus Ross (William Hurt) for going against the Sokovia Accords, but Cap hasn’t shown up to bust them out yet. He, and Nat, are still on the lam. Ostensibly Black Widow is about what Natasha gets up to when she’s not Avengers-ing, but the story that unfolds turns out to be a seminal chapter in Nat’s life. This isn’t just “Ooh, off-duty spy gets caught up in a random mission.” This is a full reckoning with Nat’s childhood and the Red Room — the assassin training program that molded her into the weapon we all know (or thought we knew) and love. We get answers to some longstanding questions (what’s the deal with “Budapest”?) but the best parts of the movie are when it is introducing things we had no way of anticipating. Specifically, Natasha’s “family” — the Russian sleeper cell she lived with in Ohio for three years as a young girl, just before her induction into the Red Room. For a brief period of time, Natasha was a typical American girl, with a mom (Melina, played by Rachel Weisz), a dad (Alexei, played by David Harbour), and a kid sister named Yelena (Florence Pugh). Despite the fact that none of them are actually related, those three years were the most “normal” part of any of their lives, whether they care to admit it or not. Natasha comes back into her family’s orbit when a mysterious package from Yelena lands at her safe house — and lands her in the crosshairs of a powerful assailant. In trying to discover just what her sister has gotten her into, Natasha learns that the past she has been atoning for all these years isn’t really over. The Red Room is still operating, in new and more insidious ways, and Natasha will need to reconcile with the family she thought was a lie in order to topple the whole thing to the ground.

That “mission” is the weakest part of Black Widow, sadly — not because the Red Room is an uninteresting set-up but because the revelations around it are thin and uninspired. There’s the requisite evil mastermind, a Bond villain simulacrum played by Ray Winstone, who is so underutilized it becomes clear that somewhere along the line even the writers (Eric Pearson, with a story by WandaVision’s Jac Schaeffer and Ned Benson) realized that the bad guy isn’t the point of the movie. The point is the character work, and that is the stuff that shines. Harbour and Weisz are charming comic relief, but Pugh’s Yelena is the perfect funhouse mirror for Natasha. She’s an assassin who didn’t get out of the program, but also never seemed to have learned the spy-craft that sets Nat apart. Yelena is bratty and brash, daring to poke fun at Nat’s signature superhero landing pose. She is just as straight-faced as her sister but not half so serious, with a caustic wit that won’t shut up. Remember that whole “Natasha can’t have babies?” reveal from Age of Ultron? Yeah, it still sucks — but it is almost entirely redeemed in a single scene here, when Yelena graphically and hilariously explains what a hysterectomy is to a horrified Alexei. Their shared trauma isn’t presented as “monstrous” anymore. It is matter-of-factly owned, a reality they carry with them but does that not define them. In the context of the Avengers, Natasha is the coolheaded professional. She’s driven (by the “red in her ledger”), but she’s also treated as the reliable pillar that supports the showier heroes. Putting her in this context gives us a window into the forces that shaped her. Her choice to be a hero was every bit as deliberate and meaningful as Cap’s goodness or Tony’s atonement. She was always driven, always loyal, but her unflappability came from her spy work, and the lengths she took to get out. What this movie proves is that there are tons of Black Widows out there, mostly assassins in the shadows like Yelena. There are no other Widows like Natasha, and there never will be.

Perhaps that’s the hurdle that Black Widow could never quite clear: The sense that even if it succeeded in finally giving Natasha a story worth telling, all it would do was make us miss her more. Her death in Endgame was a lasting sacrifice, a rare moment of actual consequence in a universe that has consistently bent the rules to avoid them. In that way, it was impressive. Yet here comes Black Widow, highlighting all the potential in the character we’ve already said goodbye to — all the potential the MCU didn’t see fit to acknowledge until far too late. Sure, it’s blatantly setting up Yelena to carry on Nat’s legacy, and that’s great! Maybe she’ll be allowed her own due portion of the spotlight moving forward. But how much differently would Nat’s death have hit if we knew all this beforehand?

What we’re left with is an entertaining enough film on its own, with some standout set pieces and a few fight scenes worthy of Atomic Blonde. Director Cate Shortland has a rare eye for humor, knowing the dialogue moments to let breathe and a flair for visual comedy even amidst the explosions. Truly, the film is far funnier than it has any right to be — which again is a nice contrast to the typically buttoned-up Natasha. Maybe, when people inevitably rewatch the MCU movies in chronological order before the next big team-up extravaganza, Black Widow will feel more at home as a piece watched before Infinity War and Endgame. Watching it now, after all the delays and as the MCU is already dipping its toes into its next phase, it feels like an afterthought — and that’s a sad legacy for an Avenger who deserved better.

That’s it for the mostly spoiler-free review, but there are a few specifics I’d like to touch on for people who have seen the movie. Please keep the comments a spoiler-free zone for those who choose not to read on (don’t worry, we’ll have a follow-up post regarding the end credit scene soon, and that will be a great place for all your detailed thoughts!), and for the rest of you: PREPARE FOR SPOILERS!
…
…
…

Still with me? OK, so Black Widow isn’t just abstractly the reheated leftovers of the MCU — it’s specifically warmed-over Winter Soldier. The big Red Room twist is that the girls aren’t just being physically and mentally conditioned to be perfect weapons anymore, they’re being chemically brainwashed. In fact, the Russians stole the knowledge on mind control from Hydra’s own research into the Winter Soldier program (hence the mission in Ohio). And within that Winter Soldier riff, there’s another layer: Taskmaster (Olga Kurylenko), who we find out is the villain’s daughter. Natasha thought she killed the girl alongside her father when she initially took down the Red Room, as part of her defection to S.H.I.E.L.D. Instead the pair survived, though the girl was so damaged that her father put a chip in her brain and made her even more than a Widow — she’s a mind-controlled soldier capable of mimicking any fighting style she witnesses. The Winteriest Soldier of the lot. It’s a disappointing twist on the comics, where Taskmaster is sort of an entertaining amoral asshole, but it’s also a wasted opportunity within the film itself. The potential fireworks of Natasha facing off against an adversary who can not only copy her moves but also those of all the other Avengers is only barely realized on-screen.

All these new Black Widows are seeded across the world, working undercover and awaiting orders from Winstone’s Dreykov. Natasha on the run, uncovering a shadowy conspiracy set to turn the world powers on their head? She’s already done that with Steve Rogers. In fact, a Winter Soldier-style espionage thriller would be a great fit for a Natasha solo joint, if it wasn’t just a rehash of the last one Marvel did. To make this Natasha’s story, they turn the horrors of the Red Room into a tale of girls being the world’s most abundant disposable resource. Get it, because women? Or something? It’s not bad, but it sure does land as a lazy afterthought embedded in a cheap Bond villain speech rather than a fully developed message.

There’s a lot to like in Black Widow, truly — but it never quite finds a way to situate Natasha’s excellent emotional journey into a plot that matches its intensity. The two are unbalanced, at odds with each other, and the fact that there is so much to enjoy in Nat’s arc with her family is almost in spite of the circumstances surrounding them.

← Spoiler Recap: 'Fear Street Part 2: 1978' Goes to Camp in an Obvious, Entertaining Homage to 'Friday the 13th' | 5 Shows After Dark: 'The White Lotus' Premiere HBO, 'Wellington Confidential' on The CW →