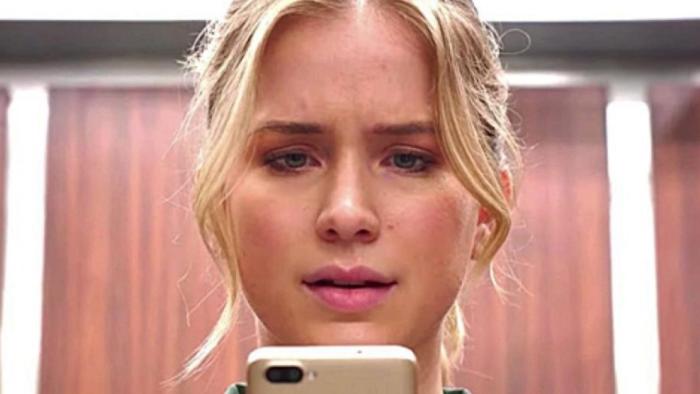 'Countdown' Review: Even Terrible Movies Can Be Fun in the Right Context

Watching a horror movie in a movie theater is a completely different experience than watching one at home. It’s an unfamiliar environment, it’s dark, it’s loud, there are fewer chances to escape for snacks, and if the rest of the audience cooperates, it’s easy enough to get so lost in the film that you feel like you’re in it. The rare horror movie that relies on a strong writing, great characters, and a smart story can be just as effective in our living rooms, of course, but the majority of horror films — particularly those of the PG-13 ilk that feature an attractive, generic cast — operate more like a Halloween haunted house. They throw at the audience as many loud noises, jump scares, and creepy images as a PG-13 rating will allow, and the idea is not to entertain moviegoers. It’s to get them to gasp, jump out of their seats a few times, and laugh at those around you who do the same. It’s a fun communal experience, which is why cheap horror movies are the only genre of films besides superhero movies that still consistently generate profits at the box office.

That’s not a knock against these films. Folks like James Wan and Leigh Whannel have perfected the art of the horror movie roller coaster, while the Paranormal Activity movies — for a while, anyway — did a fine job of recreating the haunted house experience. The problem is, as you get older, you’ve seen all these tricks a hundred times, so you can telegraph all the jump scares and twists. Unless there’s a great story or a great performance, the movies are very much like walking through the same haunted house for the 50th time. The thrill is gone or, at the very least, muted.

On the other hand, walking through that haunted house for the 51st time with someone who has never been in it can completely reinvigorate the experience. In fact, it’s almost better than the first time, because you feel no sense of fear or dread yourself, but you can experience the second-hand thrill of watching someone else experience it for the first time.

That’s what happened to me when I took my 12-year-old son to see Countdown, his first real horror-movie-in-a-theater experience. Countdown, from writer/director Justin Dec, is a mediocre film at best, but it’s not really trying to be a good movie. It’s designed to be a theater experience for teen audiences who have not walked through the same haunted house four dozen times. To that extent, it works. If I’d watched it by myself, I’d have been bored and probably annoyed; if I’d watched it at home, I’d have turned it off. But the movie is not targeted at me. It’s targeted toward people who haven’t seen the same tricks, who don’t know all the horror-movie tropes already, and who don’t yet understand that there’s a misdirect before every jump scare, and who haven’t seen bodies contort into creepy shapes dozens of times. Watching entry-level movies like Countdown is how you pay your dues. It’s hard to appreciate the subversion of tropes until you’ve seen enough films execute those tropes often enough to make them feel stale.

I saw it in a theater full of horror-movie newbies, the majority of whom were probably under 20, who never got to see I Know What You Did Last Summer or Blair Witch or any of the Final Destination films in theaters. When you’re that young, a horror film can be like kissing someone for the first time: It’s amazing because you don’t have anything to compare it against. And let me tell you this, folks: My kid nearly leaped out of his seat a few times, and there were other teenagers in the audience gasping and loudly reacting to what were essentially a series of well-placed loud noises combined with a few effectively creepy images.

As a haunted house, it’s fun. As a movie, it’s crap. The Countdown is an app that tells you when you will die. It is never wrong. A bunch of people download the app, many of them die when the app tells them they will, and then a couple of characters played by Elizabeth Lail and Jordan Calloway try and figure out how to beat the app. It involves a rapey doctor played by Peter Facinelli, a priest played by P.J. Byrne who tries to exorcise a demon from an iPhone, and a smartphone salesman played by Tom Segura who tries to delete the demon by hacking into the app (Byrne and Segura deftly provide the comic relief).

Is it dumb? Yes. It is so very dumb. Is it good? Oh, absolutely not. But strictly speaking, as a communal moviegoing experience among teenagers who want to feel their hearts race a few times and walk out talking about a character whose feet bent completely backward, it gets the job done. I didn’t like the movie at all, but damn, I had a good time.

← Stream It Or Nah: There's Room For Season 2 In Netflix's Paul Rudd Comedy 'Living With Yourself' | Review: 'The Current War' Is Downright Embarrassing →