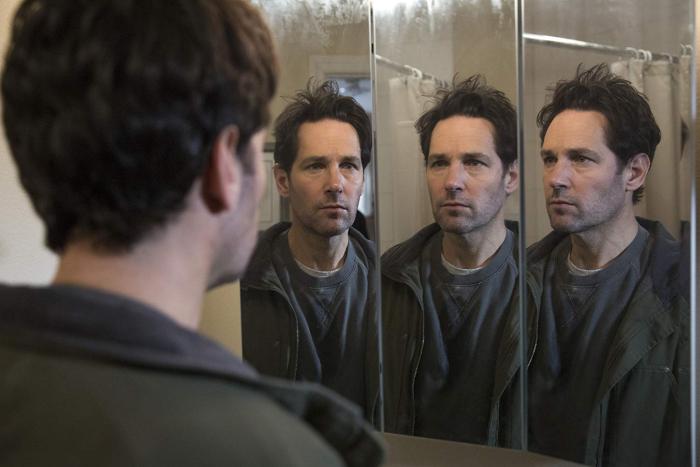 Stream It Or Nah: Netflix's 'Living With Yourself' Proves That Yes, It IS Possible For Paul Rudd To Be Unlikeable

If you listened to this week’s episode of Podjiba, then you’ve already heard Dan and I unpack our unique reactions to Netflix’s dual-Rudd comedy Living With Yourself (and you also got to hear Dan sing, but that’s another matter entirely!). We ended our discussion by trying to decide whether or not to recommend the show to Dustin, which was frankly a foolhardy endeavor. The man has too much TV on his plate as it is! He’s still watching Riverdale! Telling Dustin to watch a new show is like offering a drowning man a jug of water. It just feels cruel somehow.

However, not all of us are as masochistic in our viewing habits as Dustin is, and for those of you who are still on the fence about giving this show a chunk of your precious time, let me try and break down the pros and cons of pressing play …

— Paul Rudd is pretty uniformly charismatic no matter what, and here he’s given twice the opportunity to charm you!

— By Netflix standards, Living With Yourself is a breezy watch. The first season lasts 8 episodes, and they mostly clock in at under 30 minutes each. I watched almost the entire thing in a single night (don’t be like me, but also — you’ll survive). And while there are enough dangling plot threads for the show to justify a second season, there’s no indication yet that the show will be renewed — so you can easily treat this as a self-contained story and never look back.

— The show was created by Timothy Greenberg, a writer and producer known for The Daily Show, Wyatt Cynac’s Problem Areas, and The Detour, and each episode was directed by Jonathan Dayton and Valerie Faris, the team behind Little Miss Sunshine. So, not a bad pedigree!

— Did I say Paul Rudd will charm you? Because actually, he may not — and that might be the most appealing aspect of the show. Here Rudd plays a middle-aged sad sack named Miles, and also the new & improved clone version of Miles, and both of them are frequently unlikeable. It’s a refreshing departure for Rudd, who still manages to squeeze some levity out of this bizarre existential crisis but otherwise plays it serious. The show entirely hinges on his performance, and in other hands it could easily have come off as too dour and off-putting, so it’s to Rudd’s credit that the characters remain appealing even when they’re being awful.

— It’s weird! It’s unexpected! If you were looking for a lighthearted romp, this ain’t it! It never quite invests in a tone or a genre, gliding like mercury between situational comedy and emotional drama, sci-fi and suspense and character study. It’s got some pretty sizable plot holes. But more than anything, it’s a show about how slight disappointments and banal disillusionments can compound, meaning you’re going to have to buy into 7 episodes of watching people who seem to have it all act like miserable, self-involved pricks to each other before they start to turn it around in the 8th.

Having said all that, let me add that though it may not be everyone’s cup of tea, it definitely was mine. I can forgive the flaws because around every corner there was a moment that surprised me. Right from the start the show signals that it isn’t quite what the trailers might have sold you, as the first scene opens on a very confused Paul Rudd climbing out of a shallow grave wearing nothing but a diaper. Rudd plays Miles, a bored marketing agent living in the suburbs with his wife Kate (Aisling Bea), a busy architect. They’ve been trying to have a baby together, but it hasn’t happened for them yet and Miles keeps canceling his semen analysis appointments at the fertility clinic. Instead, when he hears from a chipper co-worker about an exclusive new spa treatment that turned his life around, Miles empties their fertility savings and drives straight to the run-down strip mall to give it a shot for himself. The treatment promises to make him a better version of himself, and the catch is that they mean it literally: They make a quickie clone of Miles and send him on his way home, while the original Miles is killed (only, not) and packed off to that grave in the woods. It takes almost no time for the two Mileses to come face-to-face in their home and figure out what happened — and it’s here that the show refuses to bow to your expectations.

For a while, the episodes alternate between each Miles’s point of view, exploring how the new Miles takes over the old Miles’s job while the old Miles stays home to watch porn and work on his self-indulgent stage play. You start to root for new Miles, and hope that old Miles will wind up back in that grave or at least fly away and leave his life behind in his clone’s more capable hands. From the outside, the new Miles does seem to be an improvement in every way — not in any tangible respect, but merely by being less cynical. Life hasn’t worn him down yet, because he hasn’t lived. And that’s the point: It’s easy to be a better person when you haven’t faced any challenges, so the real question becomes whether Old Miles is capable of change — and what New Miles will do when faced with problems of his own.

Still, it isn’t until the show finally allows Kate’s point of view to swap in it becomes something more than a thought experiment and finds some real kernels of truth. Through Kate we see that their marriage hasn’t always been a slog. We see the hopes for the future that brought them out of the city and into the suburbs in the first place. And we also see that there is no grand secret to their current dysfunction. They’ve simply grown apart, or maybe it’s more appropriate to say that they’ve stopped thinking of their lives as something they’re living together. Old Miles is quick to say that his rut, or his search for self-help, has nothing to do with Kate, which is ludicrous. It may feel personal to him, but his happiness (and their finances) matter to her as well. Kate is also alone in her pregnancy disappointments, and she’s stopped caring about trying to reconnect with her husband — that is, until New Miles comes around. It would have been the obvious thing to have Kate see in New Miles the man she first fell in love with, and have Living With Yourself be the story of the clone taking over the life of the original — but that’s not this story. Instead, New Miles learns that he’s not the superior version in every respect, while Old Miles starts to find things that are worth fighting for and Kate realizes that there is no version of Miles that can replace the one that’s been with her every step of the way. Sure, they’ve grown apart — but even that disconnect and disillusionment is something they’ve earned together. It connects them.

Ultimately Living With Yourself is a meditation on what self-improvement really means, and I sort of appreciated the way it duped you into thinking it would be something else every step of the way. The dual-Rudd premise rarely delivers on its buddy-comedy potential, and the promise of a murder thriller turns into nothing more than a late-stage Rudd fight. Even the sci-fi cloning angle is only explored in the most throwaway respect. Instead of a vast technological conspiracy, the spa boils down to being nothing more than a rinky-dink operation run by two dudes in need of cash while some shadowy “corporate” umbrella breaths down their necks. A slight complication arrives in the form of an FDA investigation, but fizzles out as an episode-long diversion. One angle that I imagine a second season would explore would be the nature of the corporation behind the cloning spas (there are more hiding in secret around the country), and the show heavily hints that Miles has already met the honcho behind it all through his job. But whatever mysteries a second season offers, I doubt they’ll be explored as anything more than set dressing or occasional roadblocks for the characters. After all, the big cliffhanger reveal between Kate and the two Mileses means there’s a whole new path lying ahead of them, and plenty of room for them to continue to grow.