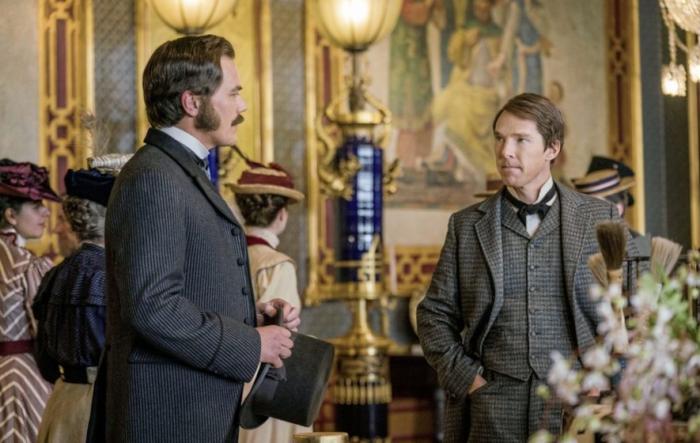 Review: 'The Current War' is Shockingly Boring, Lacking Any Spark

Back around 2012, the Oatmeal put up a comic about how Nikola Tesla was the awesomest genius who ever did swing electrons around and that his contributions have mostly been forgotten because Thomas Edison was a fucking douchebag who couldn’t engineer but sure could steal and market. Basically, Edison was Steve Jobs before the invention of the turtleneck.

If you recall in those days of internet yore, Tesla got something of a following among geeks, just enough that someone realized that the “war of the currents” between direct current and alternating current electrical fetishists engineers might be interesting enough to make a movie out of. In 2017 they did just that, and hired a shockingly good cast: Benedict Coulombatch, Tom Hollamp, Michael Shannohm, Katherine Watterson, Nicholas Volt, and Tuppence Middlejoule.

It flopped so badly on the film festival circuit that it got buried until just now, when the studio created a “director’s cut” and released it under that name instead. You know how normally “director’s cut” means that the movie is longer and includes important nuance that the evil studio didn’t understand? Yeah, in this case they just cut ten minutes and pretended it was something different. At an hour and forty-five minutes it felt as long as Titanic, but with a more predictable ending. Guess what everybody? Spoiler alert! America gets electricity.

It is downright embarrassing how a film can get a cast this loaded, a story that basically has a script already written by the internet, and still be so tedious that it’s like reading the Albanian language Wikipedia page of the history of electricity through the beta version of Google translate. In fucking Esperanto.

The movie has no idea what it wants to be. It is somehow three different biopics mashed together with an awestruck look at invention with a dash of a heist film, bits and pieces of a corporate legal thriller, and some sort of contrived morality play on the death penalty all ground up into a sausage of mediocrity. It reminds me of the time that I tried to make this elaborate recipe of Emeril’s that had three different ground meats, about seventeen other ingredients, and three hours of work. The end result tasted like a giant pile of cheap ground beef without seasoning.

That’s what The Current War is: cinematic meatloaf. Oh, sorry, it can’t be cinema, every actor except Jack McCoy’s daughter has been in a superhero movie or television show, even if Scorsese was an executive producer on this. Strange then how they forgot to at any point in The Current War convey any emotional or psychological experiences to another human being. The spark just wasn’t there, I guess.

In addition to failing to entertain in the slightest, the movie completely fails to convince us that any of it matters. Stories have to have stakes. They might be stakes that are trivial to anyone but the characters, they might be grandiose world-shaking stakes, they might be anywhere in between. They might be physical, they might be historic, they might be emotional. But they have to exist on some level. There has to be a motivation for the events mattering.

The Current War sets itself up as about the conflict between DC and AC, and Edison and Westinghouse. But it never matters to the audience who wins. Even if you don’t know which one won half-remembered from high school history, you know that one of them won because you’re not sitting in the dark. We know electricity ends up happening. So the stakes have to be about which man wins. But the film goes out of its way to make sure that both are more or less sympathetic in their own ways — and douchey in others — and so it really is irrelevant who does win on a character level.

OK, I hear you, but sometimes it’s the journey that matters, right? Ah, so we could have a brilliant story of how progress is made, of how genius figures out the path to the future. Intellectual discovery can be its own stakes in a story. But the film also cares nothing for actually talking about invention or the way that the geniuses figure out how things work. Electricity itself, the lightning in a bottle that gives humanity the power of gods could be the main character.

But the movie starts after Edison figures out how to make bulbs that work, after electricity and generators and wires and all that are invented and rolled out industrially. The movie very consciously starts at the point where the invention is essentially done and all that is left is the capitalists fighting over who gets rich off of it. Sure, AC won’t work for factories until Tesla invents the transformer, but don’t worry, the single most interesting character in the movie gets ten whole minutes of screen time and has already invented that in his head at the start of the movie.

Instead, we get two hours of conniving and lawsuits, most of it told essentially in montage as every ten minutes or so we get a title card flash across telling us another three years have passed. Never is there any focus on the magic of the way that electricity changes the world.

It’s the difference between the modern world and everything that came before. Everything in modern civilization stops without electricity. Name a dozen things that make the modern world modern and every damned one of them relies on electricity underneath the hood. Computers? Mass media? Please. Mass literacy and printing presses? You can’t print a hundred million copies of anything by hand. Automobiles? Does your car run well without a battery? Running water? The pumps that create water pressure for cities of millions aren’t going to work with horses trotting on flywheels. Without electricity we are a world lit only by fire. There is an intense poetry to the story that could be told of the dawning of that age. Of what exactly the dreamers dreamed when they imagined the world we have inherited. Of the darkness and tragedy of the previous world they imagined could be dispelled with those sparks.

There is a single scene in the entire movie that seems to get this. Essentially the last scene of the movie when Westinghouse asks Edison what it felt like when he got the first electric bulb to work. There is a monologue there, of the magic of the passionate sense that the world had changed in a moment and would never be the same again that captured what this movie could have been.