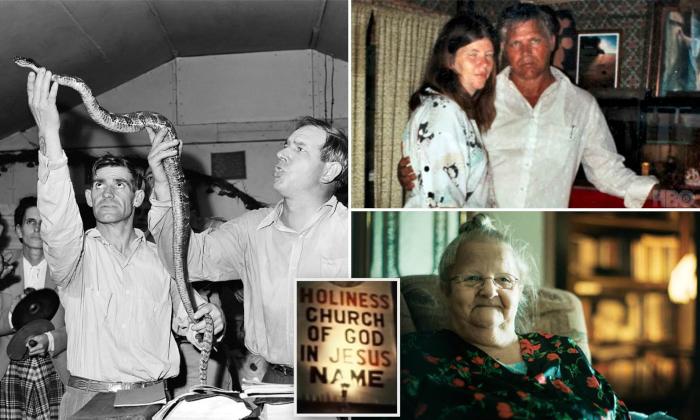 I f**king hate snakes, which should have been reason enough to avoid Theo Love’s true-crime documentary, Alabama Snake, but I’m a sucker for what’s billed as “Southern Gothic.” It’s also one of those documentaries that could easily be sold based on the pitch alone: It’s about a Pentecostal minister — the snake-handling type — from Alabama, who is accused of attempting to murder his wife with a rattlesnake.

How can that not be extraordinarily fascinating?

But here’s the thing about being poor, and I’m not talking about the, “I couldn’t pay the electric bill last month” poor; I’m talking about, “There’s a raccoon who lives in our house” poor. You know how over the last four years, the news cycle has felt like a deluge of nonstop bad news, and that it gets so overwhelming sometimes that you just kind of get numb to it? That’s what it feels like living in poverty. You hit that level of numb about halfway through Alabama Snake, probably around the time you learn that Darlene Sanford — the woman forced to hold her hand inside a cage of rattlesnakes — had also allegedly slept with her step-sons (13 and 14, at the time) and admitted it, or that these people often saw actual demons skittering around rooms. Alabama Snake is a bit like watching Appalachia Maury Povich, and bringing in an expert on snake handling in religious ceremonies doesn’t give the doc as much backbone as Theo Love might have hoped.

I suspect that HBO had hoped Alabama Snake would attract the same audience that flocked to Tiger King, and though I haven’t seen the Netflix series, I imagine that the appeal is meant to be similar: Treating a bunch of deeply religious, Pentecostal hillbillies as curiosities instead of people, but even in that regard, the “characters” in Alabama Snake aren’t that compelling. Glenn Summerford — convicted of attempted murder — is serving a 99-year sentence (it was his third strike), so his only involvement comes from a phone call from several years ago, while Darlene must be 55 or 60 years old, which is 85 or 90 in Alabama years. Present-day Darlene doesn’t make a lot of appearances because it’s clear that she’s at least somewhat detached from reality.

That leaves local authorities and the EMTs at the time of the crime to do most of the talking because they at least have a passing familiarity with reality (although, I wouldn’t want to ask them who they thought won the 2020 Presidential election). They do the best they can to piece together the events — along with court transcripts — but they butt up against a he said/she said issue, and the biggest problem with that is that neither Darlene nor Glen Summerford have a lick of credibility. He says she was cheating on him with some other pastors; she says that he wanted to divorce her to be with someone else. She says he forced her hand into a cage of rattlesnakes; he says that she was trying to kill herself. In fact, the whole thing — ironically — seems to turn on the suicide note, which she claims he forced her to write. The problem with the letter from Glenn’s perspective, however, is that she insists three times in the letter — meant to be left for her son — that Glen was asleep and that Glen had nothing to do with it. Who goes to such lengths to exonerate someone else in a suicide note?

In either respect, Alabama Snake clocks in at less than 90 minutes, but it’s 90 minutes that drag, because there are no twists behind the premise, no deeper revelations or insights about the human condition here. Glenn Summerford is a shitty guy who probably forced his wife to get bit by a rattlesnake. She called 911. She was treated. He went to jail. It’s a crazy story, but we’ve been so conditioned by the true-crime genre to expect another shoe to drop that it’s ultimately disappointing to learn that no one is really wearing any shoes in Alabama Snake, either literally or metaphorically. Like their bare feet, Alabama Snake kind of stinks.


← Review: Ryan Murphy's 'The Prom' is a Musical For People Who Didn't Think 'Glee' Was Condescending Enough | 5 Shows After Dark: 'One Night Only: The Best of Broadway' on NBC, 'Time Person of the Year' on NBC →