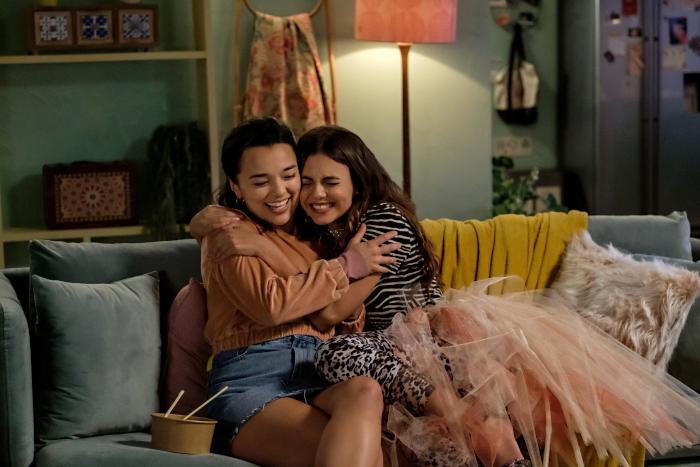 I love romantic comedies, and with my daughters, I have found a willing audience with which to watch them. Together we watched Netflix’s latest, Afterlife of the Party, and I assumed because it’s PG that it would be age-appropriate. For the most part, it is. With kids, however, you never know what might be triggering, and here it is that lead character, Cassie (Victoria Justice), falls down, hits her head on a toilet, and dies.

“What’s wrong with her, Dad?”
“Based on the title of the movie, I think she’s probably dead.”
“How did she die?”
“Well, it looks like from hitting her head on the toilet.”
“You can’t die from hitting your head on a toilet, can you? She just has a concussion, right? How can you die from that?”
[Hours later, at bedtime] “Dad, that was traumatizing. I’m scared of the toilet now. I don’t want to die from falling down and hitting my head on the toilet.”

Cassie’s death and the ensuing conversation, while apparently traumatic, also provided more drama than did the middling movie itself. It’s one of those cheaply produced generic Netflix flicks with a script likely written by an algorithm to appeal to fans of former Nickelodeon stars, bland YA novels, movies featuring guardian angels, and happy endings that might make you cry.

Justice (Zoey 101, Victorious) stars as Cassie, an event planner who is the, uh, life of the party. She has a lot of superficial friends with whom she likes to drink and dance, but her career-obsessed lifelong best friend, Lisa, (Dash and Lily’s Midori Francis) is turned off by her partying lifestyle. After a wild night of partying, Cassie and Lisa — who are roommates — get into a fight about their lifestyle differences, and the next morning, before they can make amends, Cassie hits her head on a toilet and dies.

In the afterlife, Cassie is given a guardian angel, Val (Robyn Scott), a checklist, and a deadline (why is there a time limit in the afterlife?). She has to make amends with Lisa, help her father cope with his loss, and find resolution with her estranged mother by a certain time in order to be let into heaven. A moment too late, however, and she could be sent to hell, which is to say, time is limitless, but if she’s one second over her deadline, she’ll spend eternity in hell. God is cruel, and even in the afterlife, time is linear. The one advantage she has is that Lisa can see and interact with her, which allows Cassie the ability to encourage Lisa to be both career-obsessed and find love.

It’s schlocky as hell, predictable, and mediocre beyond belief, but there’s an occasionally poignant moment, mostly revolving around the relationship between Cassie and her father. Victoria Justice, to her credit, is charming and spirited, although if I didn’t already know she was a former Nickolodeon star, I’d still know she was a former Nickelodeon star from a performance that almost demands a laugh track.

There’s not much here otherwise worth mentioning, but it does at least answer the question: Whatever happened to Stephen Herek, the director behind Bill & Ted’s Excellent Adventure, The Mighty Ducks,, and Don’t Tell Mom the Babysitter’s Dead? He’s making paycheck movies now, and there’s not a damn thing wrong with that. But as far as Afterlife of the Party goes? The dishes are done, man.

← Review: 'Shang-Chi and the Legend of the Ten Rings' Brings Much-Needed New Energy to the MCU | Spoilers: The Profoundly Idiotic Ending of Netflix's 'Clickbait' Explained →