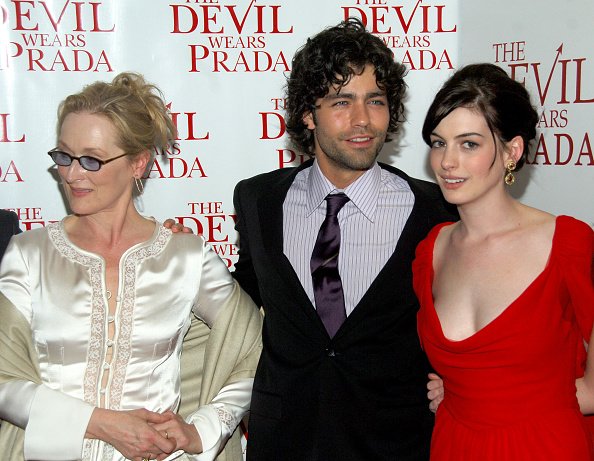 I’ve been introducing the world of romcoms to my daughters lately, because I love them, and because that’s my speed, these days. They’re nine, and they’re into them, and I cannot explain how much joy it brought me when one of my daughters squealed with delight when an actor named Jordan Fisher showed up in the sequel to To All the Boys. It was adorable.

Among the romcoms we have watched of late is one of the all-time greatest, The Devil Wears Prada, which is less a romcom and more a workplace dramedy. We watched it around the time all that stuff with Scott Rudin was going down, so I couldn’t escape the feeling that Miranda Priestly might not survive long in today’s environment. What I really wanted to stress to my daughters, however, was the importance of valuing one’s career over one’s love life at least until one’s career has been established.

They did not want to hear it. They were constantly frustrated because Andy (Anne Hathaway’s character) kept screwing over her boyfriend (Adrian Grenier’s Nate), and I tried to explain to them that it was on him to be more understanding and supportive of her career and to stop throwing temper tantrums because she couldn’t make more time for him. “But Dad,” they argued, “how would you feel if Mom missed your birthday party?” They’re nine, and birthday parties are a very big deal to them, but still, I pushed on, insisting that my wife’s career took priority, which is a tough sell to nine-year-olds who could not fathom the idea that their mom might miss their birthday party for a fashion event.

But Adrian Grenier gets it. Or, at least he does now. He didn’t always appreciate that his character was the sh*theel of Devil Wears Prada, but in EW’s oral history of the film, Grenier finally concedes that Nate was on the selfish side. From HuffPo:

Now, 15 years after the film came out, Grenier has admitted that Nate was indeed terrible — although it took him a while to realize it. He said he initially “couldn’t get my head around it.”

“Perhaps it was because I wasn’t mature as a man, just as Nate probably could’ve used a little growing up,” Grenier told Entertainment Weekly. “I was just as immature as him at the time, so I couldn’t see his shortcomings, but, after taking time to reflect and much deliberation online, I can realize the truth in that perspective.”

He went on to say that “Nate hadn’t grown up, but Andy had.”

“She needed more out of life, and she was achieving it,” he said. “He couldn’t support her like she needed because he was a fragile, wounded boy. … On behalf of all the Nates out there: Come on! Step it up!”

Hathaway was blunter about Grenier’s character, calling Nate a “brat.” She should try telling that to a nine-year-old who gets upset after you’ve missed her birthday party.

In the meantime, Hollywood continues to scuttle my attempts to impart to my daughters the importance of career over love. To wit: Last week, we watched Bend It Like Beckham, and I felt vindicated by the fact that Jess correctly chose football over Joe until that goddamn airport scene upended the movie’s hard-won wisdom! Hollywood always teaching the wrong lessons!