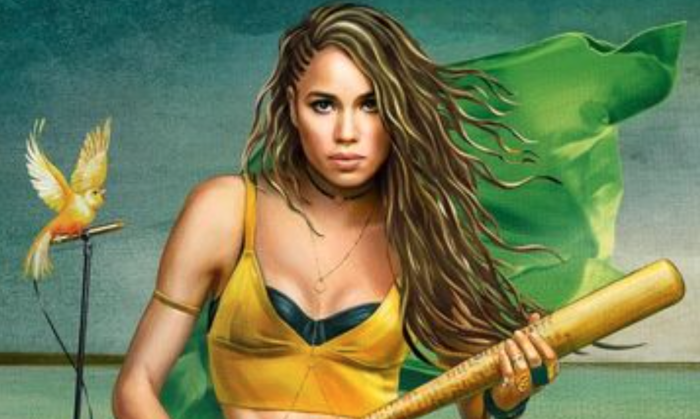 Ever since Birds Of Prey (and the Fantabulous Emancipation of One Harley Quinn) opened in theaters back in February of 2020, its fans (especially those in DCEU Twitter) made it clear that they wanted to see more. More sequels and spin-offs for its cast of characters, more movies and/or limited series in the DCEU helmed by Birds Of Prey director Cathy Yan and its writer, Christina Hodson (who is now doing exactly that, as she has been hard at work on the screenplays for The Flash and Batgirl), more of the R-rated (or at least, PG-13 pushed to the limit), no-holds-barred, darkly funny, cleverly-made subject matter that Birds Of Prey had on full display for its entire runtime, and that Marvel/Disney can’t really do with their films and television shows (at least not until Deadpool 3 finally drops). One project that fans have been asking and practically begging for: a Black Canary movie (or even a miniseries), with Jurnee Smollett reprising her role as Dinah Laurel Lance, a.k.a. ‘Black Canary,’ a martial-arts expert/nightclub singer whose “Canary Cry,” an ultrasonic scream that is powerful enough to damage or even destroy anything in its path, makes her even more of a force to be reckoned with.

Despite its underwhelming box-office results ($201 million worldwide on an $82 million budget), Birds Of Prey has grown in popularity since its release on Blu-ray/DVD, as well as its premiere on HBO and HBO Max. Its fans became even more passionate and frustrated about wanting a Black Canary movie when it was announced that The Suicide Squad writer/director James Gunn was given the green light by Warner Bros. to develop Peacemaker, a spin-off of The Suicide Squad with John Cena reprising his role as Christopher Smith, a.k.a. ‘Peacemaker,’ who Cena himself has described as “a douchey version of Captain America.” It didn’t help that this spin-off for HBO Max was given the green light before The Suicide Squad was released in theaters, let alone before we even saw the trailer for it.

Fortunately, some good news arrived to let fans know that their wishing and hoping and thinking and praying had finally paid off: Cinelinx broke the news yesterday afternoon that Jurnee Smollett and Misha Green, showrunner/executive producer of the recently canceled and Emmy-nominated HBO series Lovecraft Country (as well as the critically acclaimed, short-lived WGN America series Underground, which also starred Smollett) are reuniting once again to work on a Black Canary movie, which is currently in development to premiere on HBO Max. It wasn’t until the news was actually confirmed by Smollett, Green, and The Hollywood Reporter that people on social media began to celebrate and set off all of the reggae air-horns to make some noise.

We're just at the very beginning of a loooong journey to the screen, but obvs I couldn't turn down the chance to put the DAMN in The Black Damn Canary with @jurneesmollett! 🤑💃🏾🤩

The project, which is in early development at HBO Max, is a spinoff from Warner Bros.’s 2020 DC movie Birds of Prey which featured characters Harley Quinn, the Huntress, and Cassandra Cain. Also in the cast of heroes was Canary, played by Smollett.

Green will write the script for the feature, with Smollett due to reprise her role. Sue Kroll, who produced Prey, will produce Canary.

Prey was not a strong performer at the box office — it grossed only $201.8 million worldwide when released in Feb. 5, 2020 — but did generate fan interest and had actors who were game to play.

No take on the story was revealed, however, Canary is one of DC’s long-standing characters, having been created in the late 1940s. Since the 1960s, she has been associated mostly with Green Arrow and is known for her ear-splitting Canary Cry.

As much excitement as there was on Twitter in response to this news (some fans were even inspecting the emojis used in Misha’s tweet to see if these were hints that she might introduce Green Arrow and Bronze Tiger and Richard Dragon), there was also some anger, disappointment, and increasingly heated conversations as well.

There were complaints about Jurnee Smollett’s version of Black Canary getting her time in the spotlight to shine, but none of that same respect or attention ever being shown to Katie Cassidy’s version of Black Canary on the CW series Arrow, as many of the show’s fans felt (and still feel, depending on who you ask) that both the actress and the character were pushed aside and damn near ignored in favor of Emily Bett Rickards and her character, Felicity Smoak. (It also didn’t help that The CW decided not to go forward with the Arrow spin-off Green Arrow and the Canaries, a decision which they largely blamed on the COVID-19 pandemic)

There are those who are still mad as hell that Black Canary is being played by a Black woman, and not by one of their white female faves like Katheryn Winnick, who some fans have been fancasting as Black Canary for years.

And there were complaints about Black Canary being yet another DCEU film with a lead character who is female or a person of color or both (after Blue Beetle and Batgirl and possibly Static Shock) that is only being shown on HBO Max (which is still in the process of expanding its availability to more countries outside of the U.S.) and not in movie theaters, due to Warner Bros. (and DC Films president Walter Hamada, whose name is familiar to DCEU fans for far too many unpleasant reasons) and their belief that non-white characters are too much of a risk to deserve a theatrical run. Not only has this added fuel to the fire for those who have been repeatedly calling out Warner Bros. for racist and problematic behavior towards artists, but it also continued another heated conversation that has been occurring on Twitter this past week, when Dune director Denis Villeneuve stated how upset and disappointed he was that his upcoming film would not be shown only in theaters, but on HBO Max as well.

“First of all, the enemy of cinema is the pandemic. That’s the thing. We understand that the cinema industry is under tremendous pressure right now. That I get. The way it happened, I’m still not happy. Frankly, to watch Dune on a television, the best way I can compare it is to drive a speedboat in your bathtub. For me, it’s ridiculous. It’s a movie that has been made as a tribute to the big-screen experience.”

And that conversation resulting from Villeneuve’s quote became very intense and heated as well on Twitter. On one side, there were tweets in support of what Villeneuve said, in that he and other directors like him have every right to express how they want their films to be viewed for the first time by audiences worldwide, especially after working hard on said films for so many years (and also being told at the last minute by their bosses as to how their films will be viewed for the first time by audiences worldwide). On the other side, there were tweets that basically told Villeneuve and other directors like him that they were all pretentious as hell, and that they should all suck a dick from the back if they care more about people seeing their movies in theaters and possibly putting their health at risk than they do about making their films more accessible to watch and letting people watch them from the comfort and safety of their own homes. This is a conversation that’s been happening ever since Warner Bros. announced that they would release their 2021 slate of movies on HBO Max and in theaters simultaneously, but reading what Villeneuve had to say about this simply gave people on social media even more of a reason to be like…

As for Black Canary, DCEU Twitter remains divided (we are all Jack’s complete lack of surprise) as to whether the film premiering on HBO Max instead of in movie theaters is good or bad. Some people think that Black Canary and Batgirl and Blue Beetle (and possibly Static Shock) are receiving no real support from Warner Bros. and are all being set up for failure by being demoted to air on a streaming service that isn’t available worldwide for everyone to watch. Others think that this is some bullsh-t, and that if Zack Snyder can have two successful and popular films (Zack Snyder’s Justice League and Army Of The Dead) on two different streaming services in 2021 (and in the case of Zack Snyder’s Justice League, on the cable channels and streaming services that aired the film outside of the U.S.) without relying on movie theaters that were mostly shut down during the pandemic, then there’s no reason why these films can’t be successful and popular as well. Especially when HBO Max is still working on expanding internationally, and all of these films are in early development and won’t actually be released for another few years. There’s also the possibility that during those few years, more people will get vaccinated, the pandemic will become less of a worldwide catastrof-ck, and movie theaters will become much safer for everyone to attend. This means that Warner Bros. can also change their minds as how these films are distributed, and end up releasing them in theaters after all.

Like Misha herself said in her tweet, it’s going to be a loooooooong journey until we get to see Jurnee appear onscreen again as Black Canary, and not just because she recently signed a deal with Apple to develop content for Apple TV, as well as her work on the films The Mother and Tomb Raider 2 keeping her booked and busy. Hopefully, the film won’t experience the numerous production delays that affected The Flash, and the only thing that fans will need to concern themselves with are casting decisions, and sharing their hopes with one another as to who and what they’d like to see (Mary Elizabeth Winstead and Rosie Perez returning as Helena Bertinelli, a.k.a. The Crossbow Killer ‘Huntress,’ and Renee Montoya; appearances by Bronze Tiger, China White, Lady Shiva, or even Deathstroke; Green Arrow making his debut in the DCEU, if only just to see him and Huntress butt heads over his choice of weaponry; Green Arrow possibly being played by Dev Patel, Henry Golding, Luke Mitchell, or the Internet’s other favorite fancasting for the DCEU, Charlie Hunnam), and which director we would like to see adapting Black Canary alongside Misha. (Fingers still crossed that if Misha decides not to direct Black Canary herself, Cathy Yan gets the first crack at this, as well as Gotham City Sirens)

However this journey goes, here’s hoping that the wait will be worth it to see Black Canary remind us all that she’s got a killer voice.