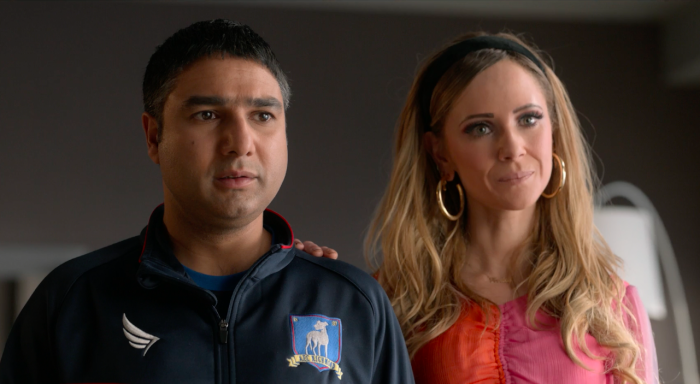 (hella spoilers for episode 5 ahead, folks)

Hello, my Little Lassos. Now that we’ve gotten some holiday spirit out of the way (for better or for worse, for some viewers), it’s time to get back to our regularly scheduled plotline. This week’s episode opens with Nate, which is refreshing considering that we’ve seen little of him aside from coaching and, well, being kind of a dick to Will, aka the most powerless person at the club. After gazing at the outside of a restaurant window, Nate walks in looking resolute. As it turns out, he’s making reservations for himself and his parents to celebrate their 35th wedding anniversary. He specifies a nice table by the front window and the hostess—whose name is Jade (Edyta Budnik) because what else would a slightly snobby, more than a little dead inside hostess be called?—goes to the back to presumably speak to a manager of sorts. Upon returning, she denies his request in the most obnoxious way possible, by passive-aggressively informing him he can have a table “in the corner.” After politely asking again, he’s shot down and leaves, clearly feeling dejected.

Later, the coaches and the team are watching their most recent loss to study what went wrong. Quietly observing in the back is the Doc, who takes notes as Isaac curses out Jan Maas. Ted realizes that Isaac is clearly in a not-so-great headspace and quickly tries to deflect by launching into one of his patented Ted speeches. It sort of works (the speech has a desperate, unpolished quality to it, which is happening more frequently these days), but it’s clear there’s a growing problem on the coaches’ hands. Yet Ted still turns down the Doc’s offer to assist. “I know exactly what Isaac needs,” he says, wielding a bit more hubris than usual. It’s decided that Isaac can only be helped by a “Big Dog,” which, as we’ll discover later, is referring to none other than Roy Kent.

Meanwhile, as Keeley invites the players to help themselves to Nespresso machines (nice product placement there), Rebecca is smiling just a bit too much at her phone. As many of us suspected, Rebecca has made a connection with someone on Bantr but as we’ve already established, the nature of the app is such that the identity of the person on the other side of the conversation is a mystery. THE GAME IS AFOOT, PEOPLE! Obviously, it’s going to be someone we already know, which adds to the suspense considering that Rebecca is clearly well on her way to being twitterpated. She sighs over Mystery Man’s Rilke reference and when Leslie walks into her office, she’s immediately bashful about the possibility of him seeing her phone screen (“Ooh, no, no, no, no. I have five boys. I never look over anyone’s shoulders to look on their screens…[haunted tone] I used to.”). But his timing is fortuitous, because after he relays to her the story of meeting his wife—confirming yet again why I would take a bullet for one Leslie Higgins—Rebecca gets up the nerve to inform her digital suitor that she’s looking for a genuine connection before flinging the phone across the couch because few things are scarier than putting oneself out there for possible rejection.

As Keeley sits in her office drinking a smoothie, she notices Nate pacing in front of her door like an anxious duck in a shooting gallery. After convincing him to come in, he finally requests his heart’s true desire: “Can you make me famous?” Keeley, as someone who has spent a good amount of time in the public eye, informs him that fame isn’t all it’s cracked up to be (“There’ll be photographers all up your bum!”), and that he’s already equipped with all the qualities he needs to be an amazing person. Nate clearly doesn’t buy it, but he’s game to go along with Keeley when she ushers him to Rebecca’s office. Once told that Nate is trying to procure a table at a restaurant, Rebecca is fully prepared to pull one of her many strings. That is, of course, until Nate tells her that it’s just a little place in Tooting (SO WHAT’S WITH THE ATTITUDE, JADE?!). It’s obvious to Keeley and Rebecca that Nate needs far more than just a restaurant table.

In another part of town, Captain Five O’Clock Shadow is procuring a tasty kebab for himself when who else but Ted saunters in. Of course, it’s no accident (a little birdy named Keeley divulged Roy’s location), as Ted has an offer for him to come back to AFC Richmond as a coach. Roy turns him down, citing the fact that he already has the pundit gig, as well as claiming he has no desire to coach, despite the fact that the season opened with him coaching the girls’ team. Hm. To paraphrase Oprah, “So what is the truth, Roy?” However, once he hears that there’s an issue with Isaac, Roy tells him that he’ll consider it. By now we all know that beneath the igneous rock of grouch lies the heart of a softy, which means it’s not a matter of “if” but “when.”

At Rebecca’s office, Keeley and Nate practice requesting a table in a polite but assertive manner. First, he starts off too softly, only to fly off the handle on the second go-round. Clearly, there’s some pent up aggression happening here. As Rebecca so wisely informs him: “You don’t need to be loud, Nathan. You just need to be commanding.” This is when Rebecca grants us one of the most spectacular moments in the entire series, as she demonstrates just exactly how it is she makes herself “big.” She draws herself to her full height, and with a deep breath, floats her arms upward, and gives a powerful exhale from her diaphragm with eyes wide open (Waddingham’s extensive theatre training is on full display here). It’s magical and I’m 100% stealing this move.

Later that night, when Nathan arrives at the restaurant with his mom, Maria (Neelam Bakshi), and dad, Lloyd (Peter Landy), Jade the hostess seats them at the back. When he requests the window table again, she tells him flatly that they “don’t take reservations at the window table,” which both myself and Nate are bewildered at because WHAT DOES THAT MEAN, LOOK, NO ONE IS EVEN USING IT. With Nate’s father being as disapproving as he is, there’s more on the line than just Nate wanting to show them a good time. He goes to the bathroom to try to ‘make himself big,’ but when that fails, he pumps himself up in a way that speaks to him: he spits in the mirror. Is it gross? Yes. But it’s the sort of punk rock maneuver that makes him throw his shoulders back and demand the window table. It works, and although the end result gets him what he wants, it seems more than likely we’re going to get a new Nate out of this. Whether he’s as loveable as the old one remains to be seen.

Ted and Isaac meet Roy at night in what is, for them, a strange location. As it turns out, it’s a field by the block where Roy grew up, spending each day playing football. He intends for Isaac to play with the random assortment of young players, an idea that Isaac, as a professional footballer, initially scoffs at. But when he finally starts to play, something wonderful happens: he remembers that he loves the game. It’s the stuff of every great sports-related show or film. The player inside of him emerges and begins to kick serious ass while Blur’s “Song 2” plays. Not only does it bring Isaac out of his head and back into his body that knows and loves the sport, it also confirms to Ted that Roy can bring experience and insight Ted knows he’s incapable of, which is why Roy would be such an asset. Roy, however, staunchly refuses, telling Ted he will never go back to Richmond before leaving him with a parting, “F*ck off.”

But as it usually happens with the volcanic Roy, his feelings eventually spew onto the surface, setting everything ablaze. When the day of the match against Sheffield arrives, Roy, seated in his usual pundit chair and now-signature black suit, expresses his frustration with sports commentary:

“We’re not in the locker rooms with them. We’re not on the pitch with them. We can’t look ‘em in the eyes and encourage them to be better than they ever thought they were capable of being. We’re jus—we’re just on the outside looking in. Judging them.”

When Roy sees Isaac on the screen, looking revived and joyous, he realizes that he’s the reason why. Finally, he confesses the truth we’ve known all along: “I miss all of it.” That’s when he runs. He abandons the studio and runs to AFC Richmond as fast as him and his busted knee can go, all to the tune of The Rolling Stone’s “Rainbow” (nice callback). Because at the end of the day, football is the love of Roy’s life, and AFC Richmond is home. It’s pure rom-com and although it may seem schmaltzy to some, it’s admirable that the show is entirely unafraid to link the stereotypically testosterone-laden sports genre to the far more maligned and stereotypically feminine romantic comedy, asserting that the pair are essentially two sides of the same coin.

Whew. What an episode. There’s still plenty of cute piled on, especially with the liberal use of rom-com references, but the plot is certainly moving forward. One of the things that I hope gets addressed in the season is the fact that while Ted rejects Dr. Fieldstone’s every offer of assistance, he is more than happy to have Roy’s. I don’t believe it to be a product of sexism, though he clearly holds Roy in much higher regard. The show needs to dig into that. But because I’m human, my first priority is to find out who’s on the other end of Rebecca’s Bantr conversation. That cutaway shot to Ted certainly makes for a compelling case. It will also be interesting to see how Roy’s addition to the coaching team will affect Nate. He has some confidence issues, but the one thing that Nate feels good about himself is his contributions as a coach at Richmond. With Roy there now, will Nate be able to continue providing input unfettered? Next week is episode six which will officially mark the halfway point of the season. It’s been lovely spending our time in the rom-com realm, but I think it’s safe to say that we’re about to start wading knee-deep into drama.

Ted: “I believe in communism…ROM-communism.”

Rebecca: “Wait, you can’t get a table at something called ‘The Taste of Athens’ in Tooting?”

Kaleena Rivera is the TV Editor for Pajiba. When she isn’t wondering where Keeley’s office furnishings came from (especially those pink chairs), she can be found on Twitter here.